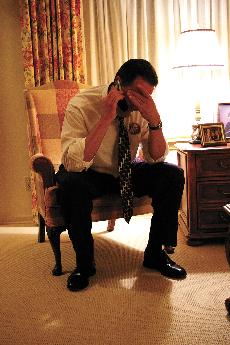 Dr. David Gill, a Democratic candidate running for Congress in the 15th district of Illinois, calls his opponent Tim Johnson to give his congratulations Tuesday evening. Gill decided to concede after it became clear he could no longer win. Aaron Facemire

As the votes poured in Monday night, 15th District Congressional candidate David Gill’s tie slid a little lower on his neck. He unbuttoned the top button of his white dress shirt and rolled up his sleeves, sporting an easy smile all the while, but Gill could not stop the sweat from blossoming on his brow.

It was that kind of night.

Johnson took home 60 percent of the vote to 40 percent for Gill, a margin of victory only slightly smaller than the 2004 election, when Johnson claimed 61 percent.

Johnson’s victory preserved his perfect record in elections, dating back to his initial campaign for the state house in 1976.

“It appears now nationally . that this is less than a stellar year for Republicans around the country, but I’m very, very grateful and frankly humbled to have received the margin (I had),” Johnson said.

In his acceptance speech, Johnson said that the past two years had been some of the most divisive in American history and he hoped Congress could work in a spirit of amiable discourse.

Though Gill conceded to Johnson’s win, his speech was similarly upbeat.

“I wish we had won, but (I feel) mostly gratified for all the people who made it a race that was a near victory,” Gill said. “(It was) a very grassroots campaign that a lot of people nearly turned into a win against an incumbent congressman.”

Gill held out hope even after the media called the race in Johnson’s favor shortly before 11 o’clock, but it soon became clear that Johnson had a comfortable lead.

In the campaign, Gill championed a national health-care program and the immediate removal of troops from Iraq, while Johnson campaigned on a platform of avoiding taxes, promoting growth and constituent services.

Gill said he would consider running again in 2008, but that it was too early to make a decision.

“I wouldn’t rule it out,” he said. “I’ll assess these results and give it some thought over the next several weeks.”

The laid-back atmosphere was indicative of the everyman, non-politician attitude Gill tried to exude in his campaign.

In the next two years, Johnson said he hoped to work effectively with the Democrats that have gained a majority in the House.

He said he would not retreat from his party affiliation, but he would put his conscience and the concerns of his district first.

For his part, Gill extended good wishes to Johnson and said he was ready to get away from the campaign trail.

“I wish Mr. Johnson well and I hope he does a good job of looking out for the interests of his constituents,” Gill said. “(I’m looking forward to getting) back to my regular life, get back to working in the E.R. and taking care of my wife and kids.”