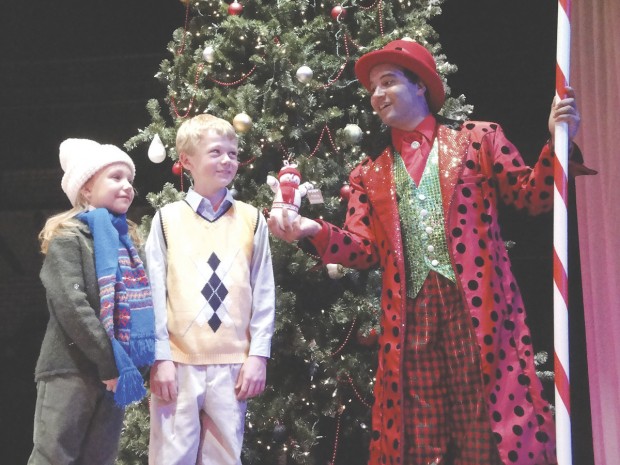 Circa ’21 Dinner Playhouse is offering a huge buffet, overflowing with delicious favorites just in time for the holidays.

And there’s food, too.

Circa’s holiday revue, “Holly Jolly Christmas,” is a performance smorgasbord, numbering about 40 different songs (not to mention six to eight more in the Bootleggers’ preshow) that range from traditional favorites to newer songs to unfamiliar-yet-well-done stuff to a couple of movie-musical songs that somehow get wedged in.

After a dazzling intro, the show is divided into four parts — the first of which takes Santa and Mrs. Claus (played by real-life married couple Kevin Grastorf and Autumn O’Ryan) to Christmas around the world, with French, Spanish, Irish and Hawaiian Christmas songs. The second is a family Christmas that escalates into a children’s fantasy. The third has a 1950s-’60s TV variety special vibe, and the latter recreates the Nativity scene, albeit with a ballerina.

Besides the Clauses and a pair of kids — Ali Girsch, Grant Osborn, Mackenna Janz and Cole Bizarri trade off the roles — the cast includes 10 singer-dancer-actors, including familiar faces Liz Millea (spending much of her time onstage as a flirtatious femme fatale) and Andrea Moore (whose roles include the fourth assistant elf, Nutmeg).

Several other performers shine, including Justin Droegemueller as an airport-snowbound dad in “Christmas Eve in My Hometown” and as the annoying elf Eggnog; Jennifer Stone’s “Christmas All Over the World” and Joseph J. Baez, who provides much of the comic relief as well as an impassioned “Mary Did You Know?” which introduces the Nativity sequence that includes a reading of “One Solitary Life” by an all-too-stern narrator.

Director-choreographer Norb Joerder navigates well through most of the night, including Santa’s peppermint schtick dialogue and numerous Quad-City-ccentric punchlines, and he directs the dancing cast in some energetic numbers.

The script by Ty Stover and music arranged by JR McAlexander frequently tries too hard to be all things to all people. Within its time frame, it attempts to be a Lawrence Welk episode, have a goofy international view, make hearth-and-home statements about Christmas, capture the excitement of children, do a flat-out variety show and make a statement about the birth of Christ.

If you’ve got the appetite for it, by all means indulge in everything that “Holly Jolly Christmas” has to offer. But you may find the goodies on the plate are stacked just a little too high.