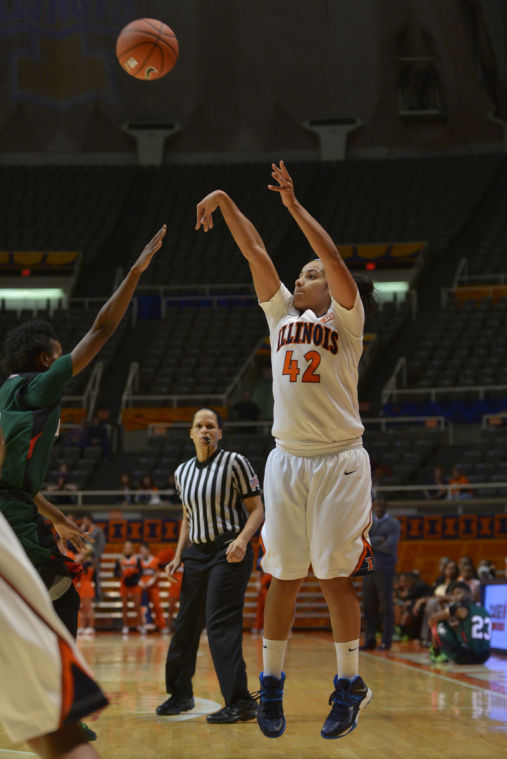 Illinois' Amber Moore shoots from the three-point line during the game against Mississippi Valley State at State Farm Center on Thursday, Nov. 14, 2013. The Illini won 93-70.

Amber Moore did just about everything for the Illinois women’s basketball team in its 93-70 win against Mississippi Valley State on Thursday night.

Just two days removed from setting the school record for career 3-pointers made in the team’s 87-59 win against Valparaiso, Moore set a new personal record, this time for rebounds. She snagged 19 in 34 minutes of play, smashing her previous best of 11 in a game.

Moore accounted for 39.5 percent of the team’s total rebounds. The senior guard’s rebound total wasn’t the only gaudy stat of the night for her as she continued her hot shooting, hitting six threes on 13 attempts for 27 points, four shy of her career high in a game. She finished the game shooting 47 percent from the field to go along with a 46 percent three-point percentage.

“I challenged (Moore) to go to the boards and be a rebounder,” head coach Matt Bollant said. “She’s got great hands and good instincts. … Twenty-seven points and 19 rebounds is a pretty special game, and of course now the coaching staff is going to expect a lot of that. We’ll continue to ask her to rebound and defend and do that.”

Illinois opened the game on an 8-0 run and never allowed Mississippi Valley State within two. The Illini broke open the game by the end of the first half by going on a 14-2 run over a five-minute stretch. Defensively, the Illini saw a complete team effort, as the starters accounted for 16 of the team’s 17 steals, with no one player accumulating more than four. The Illini also caused the Devilettes to turn the ball over 23 times, while Illinois turned it over 13 times, something Bollant said the team has improved on so far.

“We’re heading in the right direction,” Bollant said. “It’d be great if we can keep it down to 13. Especially with as many possessions as we play, 13 is pretty solid.

“We’re more concerned with our ability to get stops, we need to grow in that area.”

Freshman forward Jacqui Grant also showed steady improvement in her third career college game, scoring a career high 22 points on seven-of-14 shooting, hitting three of four three pointers in the process. She started the season 0-6 from behind the arc.

Illinois jumps to 2-1 on the season while the loss puts Mississippi Valley State at 0-3.

Blake can be reached at [email protected].