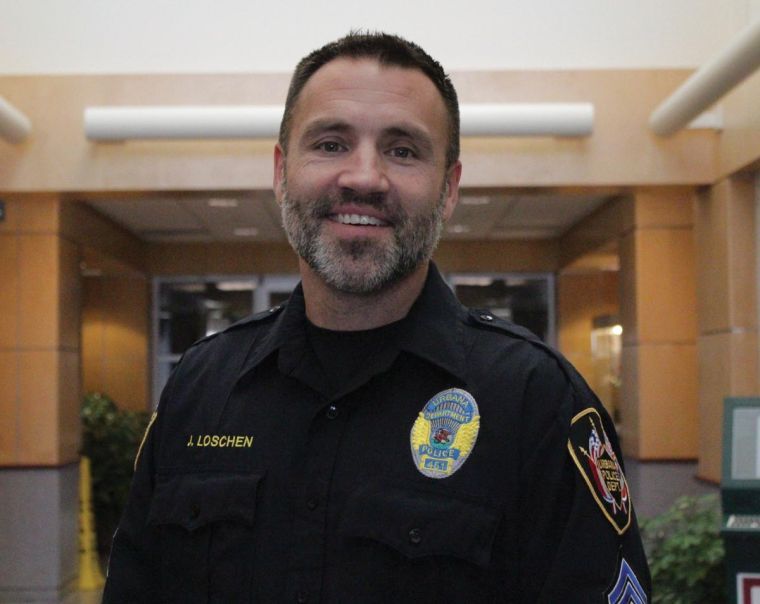 Sergeant Jay Loschen of the Fraternal Order of Police Lodge 70 shows his participation in No Shave November on Friday for the purpose of raising cancer awareness,

Members of the Fraternal Order of Police Lodge 70 are breaking their uniform code this month by participating in “No Shave November” to raise money for cancer awareness.

The department required each participant to donate $25 to the American Cancer Society. The lodge is matching the amount raised, which comes to a total of $1,125, said Urbana Police Officer Daniel Bailey, president of the lodge.

“We do various charitable events through the FOP, and this was another opportunity to do something in the community,” said Urbana Police Sgt. Adam Chacon, who is growing a goatee for the month.

The lodge is the Urbana Police Department’s union for active and retired officers, and 24 of the 53 sworn officers are growing facial hair, Bailey said.

“Starting last year, a few of us grew mustaches that didn’t normally have them,” Bailey said. “This year, command came to us and said, ‘Hey, we’re willing to let you go outside of the uniform policy as long as it’s … a charitable event.’”

The idea was inspired by the Rantoul Police Department’s “No Shave November” campaign after an officer was diagnosed with testicular cancer last year. He is currently in remission, Bailey said.

Sgt. Joel Sanders donated $25 to the American Cancer Society but chose not to grow facial hair.

“Cancer affects several people in my life … so I thought it was important to donate,” Sanders said.

As the end of November approaches, there are currently no plans for an ending celebration. But if the event continues next year and grows, a celebration could be possible, Bailey said.

The question of whether all participating officers will last the entire month is also still open.

“Some only have goatees, some are probably going to shave earlier because most of us do have wives or girlfriends and some of them aren’t entirely pleased with us growing facial hair, but most of them do understand,” Bailey said. “It’s evolved into almost like a kind of contest to see who can grow the fastest beard — the fullest beard — that kind of thing.”

Chacon is part of the group of officers who can relate to that — he isn’t sure if he’ll last the entire month.

“That’ll depend a lot on my girlfriend’s tolerance of my beard,” he said.

Brittney can be reached at [email protected],com.