Amber Moore fills void as only senior on roster 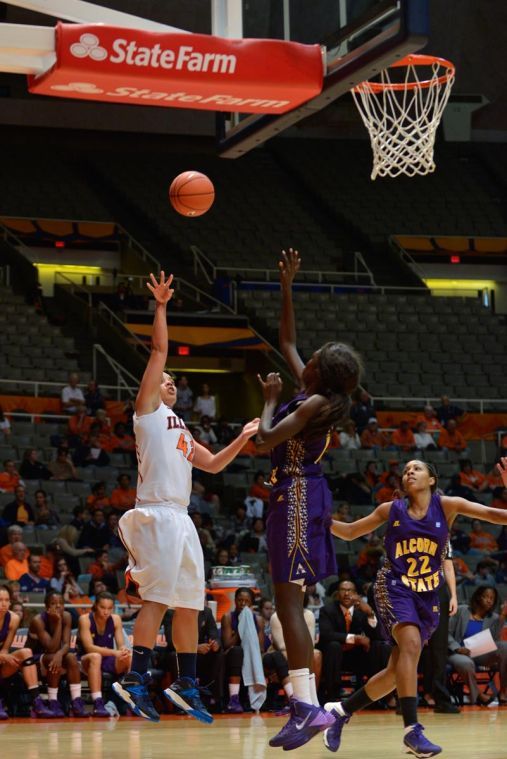 Illinois’ Amber Moore shoots the ball during the game against Alcorn State at State Farm Center in Champaign, Ill. on Sunday. The Illini won, 112-28.

Although Amber Moore has been making changes in the Illini record book, her impact extends beyond the stat sheet.

The 5-foot-11 guard on the Illinois women’s basketball team has taken her game to new heights in her final campaign in Champaign as the only senior on the roster.

Moore has increased her scoring total every season in Orange and Blue, but her statistics in 2013-14 have taken her to an elite level. Thus far, Moore has been red-hot from the field, averaging team highs of 24.0 points and 8.5 rebounds per game. The points per game speak to her effectiveness, but it’s Moore’s efficiency from the field that has fueled her game. Moore is shooting 47.1 percent from the field and 45.8 percent from beyond the 3-point line — both well above career-highs.

Her performance in the Illini’s past three games earned her Big Ten player of the week honors for the week of Nov. 10.

“She’s so much more fit (this year),” head coach Matt Bollant said. “She can do so much more now. She can get to the rim and get to the foul line, whereas before she was just a 3-point shooter.”

Moore’s numbers would all be career highs, as she’s nearly doubled her previous bests of 12.5 points per game and 4.4 rebounds per contest in 2012-13. Her rebounding has been the most significant change; Moore is playing for a team that plays two freshmen at the center position. Moore posted a 19-rebound game against Mississippi Valley State, which almost doubled her previous career high of 10 in one game.

It’s not only Moore who’s been effective offensively — the whole Illinois team has been lighting up the scoreboard. The Illini average 96.0 points per game, including a 112-point performance last Sunday against Alcorn State, which was one point away from the school record for most points in a game.

A young Illini team with six freshmen needed a leader this season with the departure of Karisma Penn and Adrienne GodBold. Moore has worked to fill the voids left by those two players both on the court and in the locker room.

“It’s a big difference,” Moore said. “Not only being the only senior and a leader, but trying to get the young ones going in the right direction and being positive all the time.”

Bollant said he never had a doubt that Moore would fill the role of team leader.

“I guess it was just to what degree,” he added. “She’s been stronger in her leadership and her vocal skills because of how well she’s played.”

In her final season, Moore has already put a mark on the program in the record book. Moore was the 26th player in Illini history to break 1,000 career points and will go down as one of the best shooters in Illinois history. The senior had already set the career record for 3-pointers attempted in a career and last year made the most threes in a single season, but she broke the record for most threes made in a game against Valparaiso.

Her record of 86 3-pointers made in 2012-13 could be in danger again this season. Moore has already hit 22 shots from deep this season which puts her on pace for over 150 this season.

While Moore said she doesn’t pay much attention to the records, she said that her mom is always keeping track of them, and told her about the 3-point record in the preseason.

“She was very excited and proud of me,” Moore said. “They all just said keep working hard and everything will fall into place.”

All of these statistics came against nonconference opponents, and Bollant said he expects a dip in production as the Illini face stronger teams, but one thing that won’t change is Moore’s leadership of a young team learning how to play together.

“I think I’ve always been a leader by example, but I’m working on being a vocal leader,” Moore said. “It’s something they challenged me with this season. … I’ve been working on not getting down when you face adversity because that’s when you need to be the most vocal.”