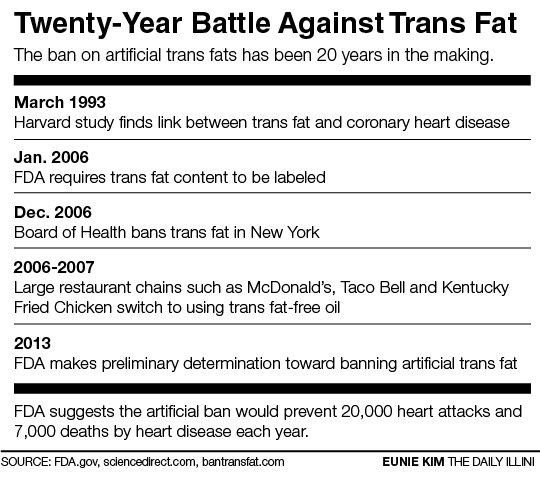 The battle to ban artificial trans fats is finally coming to a close as the FDA issued the preliminary determination that partially hydrogenated oils are not “generally recognized as safe” early this November.

This decision allows for a 60-day period during which more data can be collected, and food manufacturers can submit comments on how long they would potentially need to reformulate foods that contain trans fats.

“One thing we know is that (partially hydrogenated oils) increase blood cholesterol,” Nakamura said. “Blood cholesterol is a risk factor for heart attacks.”

Erica Nehrling is the administrative dietician for dining services at the University and is a licensed dietician nutritionist. She said an elimination of trans fat would benefit everyone who eats in University dining halls.

“The problem with trans fat is that it increases the LDL (bad cholesterol) without increasing the HDL (good cholesterol),” Nehrling said. “That total to HDL ratio is becoming the more relied upon measure for cardiovascular disease risk.”

Although food manufacturers and large fast food chains have significantly reduced the amount of trans fats used in their products in the past decade, many products such as microwave popcorn, frozen pizza and certain baked goods still contain partially hydrogenated oils despite health risks. Artificial trans fats are inexpensive to use and don’t go bad quickly.

“When they first started using it back when they discovered it in the late nineteenth century, they realized how it increases the shelf-life, and it made manufacturing easier on many levels,” Nehrling said. “So it’s unfortunate that with all of the research done that they haven’t cut out all of the trans fat, that they’ve just reduced it.”

Nehrling explained that the products in the dining halls at the University contain little artificial trans fat.

Describing a Tuesday lunch menu in the Ikenberry Dining Hall, Nehrling said, “There’s some partially hydrogenated oil that are less than 2 percent of the food in three items — it’s (in) some of the tortilla wraps, corn dogs and then our pizza crusts — and then everything else is trans fat free. So we already have pretty much taken trans fat out of everything.”

“I agree with the ban on trans fat because they do absolutely nothing good for your health,” she said.

The dining halls attempt to make as much food as possible from scratch, but with foods distributed in large amounts, like pizza, it is difficult, Nehrling said.

“So it’s very exciting to know that the products that we’re going to get will be trans fat free.”

Nakamura does not foresee any protestation by food manufacturers during the 60-day comment period.

“Food companies don’t want to sell harmful things. Banning is kind of a good thing because all food companies will have to do it,” he said. “If you have to voluntarily eliminate trans fat, the cost is very high and the company cannot do it … I don’t expect any opposition.”

In fact, a study by Harvard Medical School and Center for Science and the Public Interest concluded that food manufacturers will likely replace artificial trans fats with healthier fats rather than just increasing the amount of saturated fat.

“Banning trans fat is not a magic word. It would be a small improvement for our body health,” Nakamura said. “It may cost a little bit, but I think it’s worth paying for it.”

Zila can be reached at [email protected]