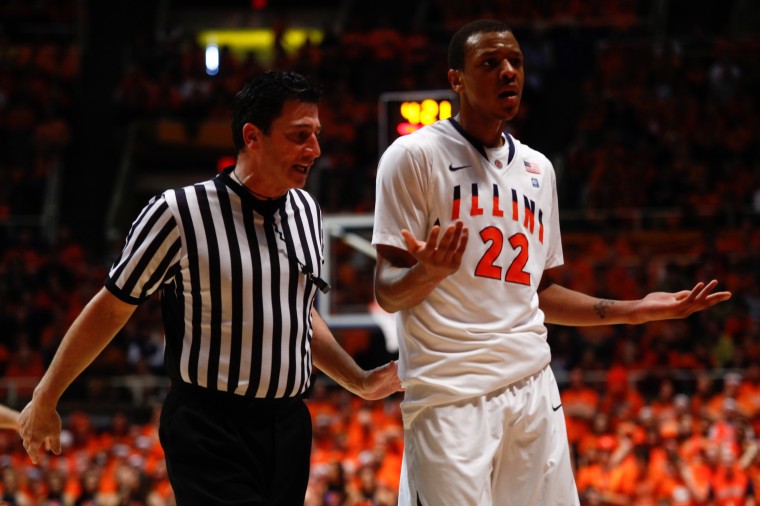 Illinois’ Jereme Richmond (22) questions of referee’s foul call during the basketball game against Purdue at the Assembly Hall on Feb. 13, 2011.

Former Illini basketball player Jereme Richmond could be in prison for close to a year after being sentenced for harassing a probation officer.

The one-time high school Mr. Basketball and former Illini has had numerous legal entanglements since leaving Illinois in 2011 after his freshman season. His NBA ambitions curdled after he went unchosen in the draft, and a comeback attempt earlier this year with a Sterling, Ill., semipro team ended when he quit the team mid-season, citing personal problems.

Richmond has been in the Lake County Jail since April after he allegedly made threatening remarks and gestures during a run-in with county probation staffers. He was just a few months away from completing his probation on a 2011 weapons charge when the alleged incident took place.

Though Richmond’s attorney, Lawrence Wade, denied that his client threatened anyone, Richmond was found guilty in August.

Judge Christopher Stride sentenced Richmond to three years on the harassment charge Monday, but the Lake County State’s Attorney’s office said that with credit for the jail time he has already served, Richmond is expected to spend another five to 11 months behind bars.

Wade said he might pursue an appeal, but if Richmond’s prison time is on the low end, that would become a moot point.

“We’ll continue to fight, and if he’s home before we can resolve it, we’ll just appreciate that,” Wade said.