The Other Guys to perform annual holiday show at Lincoln Hall 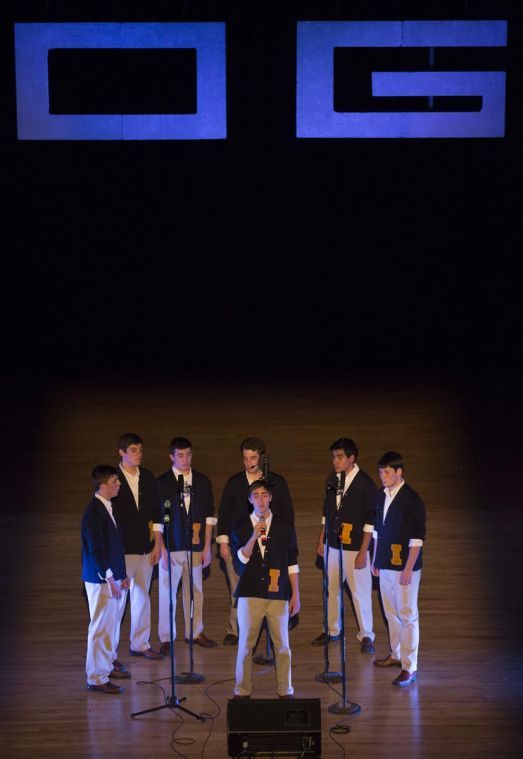 Ryan Smetana solos during The Other Guys Holiday Concert at Foellinger Auditorium last December. Some of their holiday songs are “Have Yourself A Merry Little Christmas” and “Cold December Night.”

Back for their annual holiday show, the all-male a cappella group The Other Guys will be performing at Lincoln Hall on Saturday at 7:30 p.m. The performance will include a variety of pop, barbershop and holiday songs sung by the group, with a guest performance by the Illinettes Dance Team.

Since 1968, The Other Guys have been captivating admiring fans at the University with their vocal talent, both on and off campus. The group has performed for student audiences at the University, but the octet has also traveled to venues across the country, including Soldier Field in Chicago, Gotham Comedy Club in New York City and on stages in Houston and Dallas.

“We mostly perform for high schools in the Chicagoland area and around Illinois, because it helps us get our name out there for incoming freshman interested in joining, and it can help us recruit new members.” said Rodrigo Anzures, business manager and bass singer for The Other Guys and senior in LAS.

Anzures has been a member of The Other Guys since his freshman year in 2010. He began singing in high school and continued his passion when he auditioned for The Other Guys and earned a part. As business manager, he is responsible for the business matters of the group, which include booking shows and setting up public concerts.

“This spring, The Other Guys has their 45th anniversary, and over 100 alum will be returning to sing in our performance,” Anzures said. “It should be a cool show.”

The eight members of the group include young men that range in age, major and vocal range. Anzures and Alex Corrao, senior in FAA, have both been with The Other Guys since they were freshmen. John Junk, junior in Business, Dan Lynch, junior in LAS, and Peter Jorjorian, junior in LAS, have also been members since their freshman year. Underclassmen include Ryan Smetana, sophomore in FAA, Jason Eisentraut, freshman in Engineering, and Duke Hiatt, freshman in Music.

Every week, The Other Guys practice for three hours a day, five days a week. During one academic year, they have about 100 shows, some which take place during holiday breaks. Their demanding schedule has led them to perform for a wide range of audiences.

“We sang for a high school reunion from 1963, but we also sing for a lot of students currently in high school. We always try to keep a wide variety, but also try to cater to the audience,” Anzures said.

The holiday performance will include a selection of classic holiday songs, but will strongly focus on the newer pop and barbershop songs that the group has been working on.

“We will be performing a bunch of songs ranging from Justin Timberlake to Phillip Phillips, to Billy Joel,” Corrao said. “I think it’ll be a good show.”

Tickets for The Other Guys’ holiday concert will be available for purchase outside the Quad on the north end of the Union from 9 a.m. until 4 p.m. until Friday. They will also be available at the door and on otherguys.org.

Christina can be reached at [email protected]