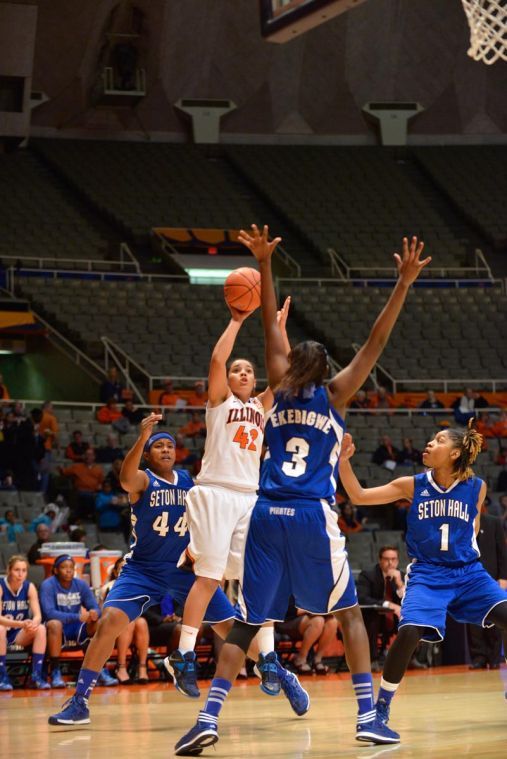 Illinois' Amber Moore shoots the ball during the game against Seton Hall on Monday. The Illini won 71-70.

There’s been two distinct teams that show up for the Illinois women’s basketball team.

One team scorches the net with one of the best offenses in the country and wreaks havoc on opposing offenses by forcing turnovers. The other can’t keep up on the scoreboard and gives up huge runs at a time that keep the Illini from being close.

Illinois (6-5) is still searching for consistency on the floor but haven’t been able to compete for the most part against teams from the six power conferences: Big Ten, Big 12, Pac 12, ACC, SEC and Big East. The Illini hold a 1-4 record against such teams. The lone victory was a 20-point comeback victory Monday night against Seton Hall, which looked as though it might turn into another defeat by blowout fashion.

“Just believing, that’s been the phrase we’ve been using the past few days,” senior Amber Moore said after the Seton Hall game. “We have the talent. We just have to believe in ourselves.”

Illinois is being outscored by 19.2 points per game against power conference teams and has missed out on chances for quality wins for its tournament resume. The Orange and Blue are winless in four chances against ranked teams or those earning votes in the latest NCAA poll.

Facing teams from smaller conferences, Illinois is 5-1, but they face only one more team from a non-power conference in the team’s final 18 games. The team has feasted on traditionally weaker schools this season, outscoring such teams by 30 points per game so far, including a school-record 84-point victory over Alcorn State on Nov. 17.

The main difference has been the Illinois offense not being able to keep up. The Illini put up 85.2 points per game in victories this season but have been held to 65.6 in the team’s five losses.

With the Big Ten conference looming — a conference with five teams at least getting votes in the rankings — the Illini will need to step up against tougher competition if they want to reach a postseason tournament for a second consecutive year.

“It’s a real fine line when you schedule. You want to get some games to build confidence, but you also want to be tested,” assistant coach Mike Divilbiss said. “It’s a real balance, it’s a real fine line, and we’re in a really tough stretch right now. So when we come out the other side of this, we’re going to be stronger for it and be a better basketball team because of it.”