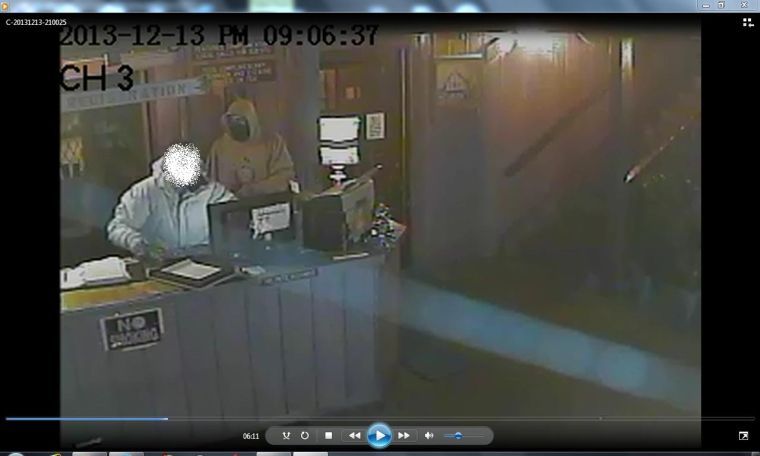 A still picture from the surveillance video of an armed robbery at the Lincoln Lodge Motel, 403 West University Ave. at around 9 p.m. on Dec. 13.

The Urbana Police Department is searching for two suspects after an armed robbery and attempted murder were reported at the Lincoln Lodge Motel, 403 W. University Ave., around 9 p.m. Friday, according to a press release.

According to Sgt. Dan Morgan, two people came into the lobby, displayed handguns to the manager on duty and told him that they wanted the safe. They also took money from the cash register and pointed guns at the manager. One of the suspects went upstairs briefly, to an apartment where the manager’s family lives.

As the suspects were leaving, they attempted to move a safe but struggled with it. They then told the manager to lay down on the floor. As they were getting out the door with the safe, one of the suspects stopped and shot the manager.

The suspects then attempted to take the safe to a car parked in the 200 block of Central Avenue, but gave up, according to the press release.

“We found the safe about halfway to where their footprints ended, where they got into a car without the safe,” Morgan said.

The manager received a minor wound from the shot. He was treated by ambulance personnel, but was not taken to a hospital, according to the press release.

Urbana police obtained a surveillance camera that was inside the motel lobby and has footage from the incident.

The suspects were both described as black males wearing hooded sweatshirts, with the hoods up, scarves over their faces and each having dark-colored handguns.

The shooter was said to be about 6-feet tall, 170 pounds and was wearing dark pants and dark sneakers with white soles. In a still picture from the surveillance footage, the shooter had a design on the front of his sweatshirt, according to the press release.

The second suspect was described as being around 5-foot-7 and had on dark pants with white sneakers. He also said to have had an exaggerated stooped-over posture, according to the press release.

The surveillance footage will be posted on Urbana police’s Facebook page. Sgt. Morgan said the department wants to publicize the footage so someone will recognize the suspects.

“Hopefully, somebody will recognize the way these guys are dressed and moving or have heard them speak about it and realize that these are the guys involved in it,” Morgan said. “We’re just looking to get the information out there for people to make the correlations.”

Anyone with information about the incident is urged call the Urbana Police Department or Crime Stoppers at 217-373-8477.