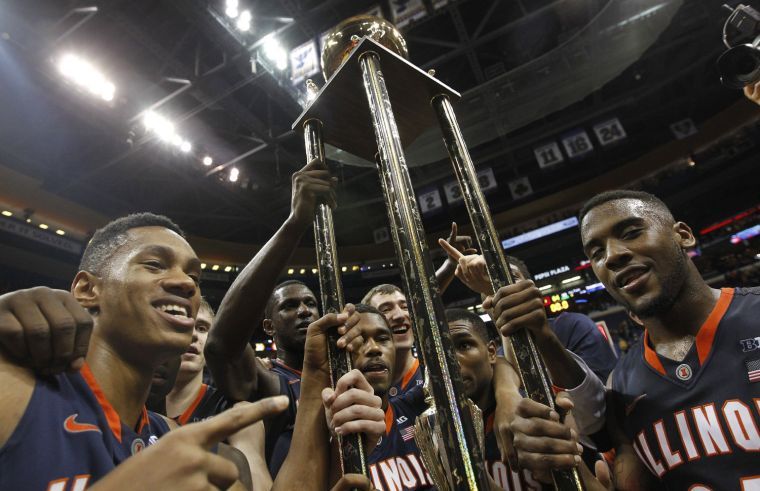 Illinois celebrates a 65-64 win against Missouri in the Braggin’ Rights game at the Scottrade Center in St. Louis on Saturday, Dec. 21, 2013.

The 33rd annual edition of the nonconference rivalry game was one to remember. For the Illini, it was their first win in the series since 2008.

Abrams calmly hit two shots from the stripe just seconds after Missouri’s Jabari Brown hit a three to put the Tigers up one. The final minute was a back-and-forth affair that kept the Scottrade Center crowd holding its collective breath.

Illinois forward Jon Ekey, a Missouri-native, hit a three to take a 62-61 lead with 49 seconds to play. Missouri’s Earnest Ross missed a layup on the next possession, and Illinois’ Rayvonte Rice was fouled. With the Tigers over the foul limit, Rice hit one of two free throws to put the Illini up two.

Then came Brown’s three off a Jordan Clarkson drive to give the Tigers the upper hand with 14.9 seconds remaining. Trailing by one, Rice tried to get to the rim but lost control of the ball.

Sometimes it’s the broken plays that work the best.

He recovered and found center Nnanna Egwu, who in turn found Abrams, who was fouled driving through the paint.

“I was just being aggressive, trying to find a way to get to the lane and they fouled me,” Abrams said.

“He’s a tough dude,” Groce said of Abrams. “He’s been a tough dude. We’ll give his parents credit for that.”

Abrams scored a team-high 22 points, seven of them from the foul line. There was no lack of confidence with the game on the line and all eyes on him.

“We shoot free throws every day in practice,” Abrams said. “It’s repetition and having confidence in your shot. I went up to the line pretty confident that I was going to make them.”

He made them, and Brown’s desperation three fell short of the rim, giving Missouri (10-1) its first loss of the season.

Illinois (10-2) couldn’t have started the game off worse. The Illini turned the ball over on their first three possessions and trailed 8-0 three minutes after the tip before head coach John Groce called a timeout.

Illinois found itself at a 15-6 disadvantage before veterans Joseph Bertrand, Abrams and Rice breathed some life into the Illini en route to a 31-27 lead at the half.

“I thought the biggest juncture in the game was when we got down 15-6,” Groce said. “We looked a little tentative. I thought the key was finding a way to scratch and claw our way back into the game.”

Both teams exchanged blows coming down the home stretch. Rice finished behind Abrams with 14 points. Clarkson led Missouri with 25 and teammates Ross and Brown added 13 and 10, respectively.

After the game, it was fifth-year senior Joseph Bertrand who carried the Braggin’ Rights trophy off the court. Saturday was his first win over Missouri, after his fellow recruiting classmates Brandon Paul, Tyler Griffey and D.J. Richardson never beat the Tigers.

But it was Abrams, in his 36 minutes of play, who spearheaded the attack.

“Tracy was a warrior tonight,” Rice said. “He played great, made big plays for us, scored when he needed to score. He did everything you could ask him to do.”