Hiltzik improves on the court by balancing life off it 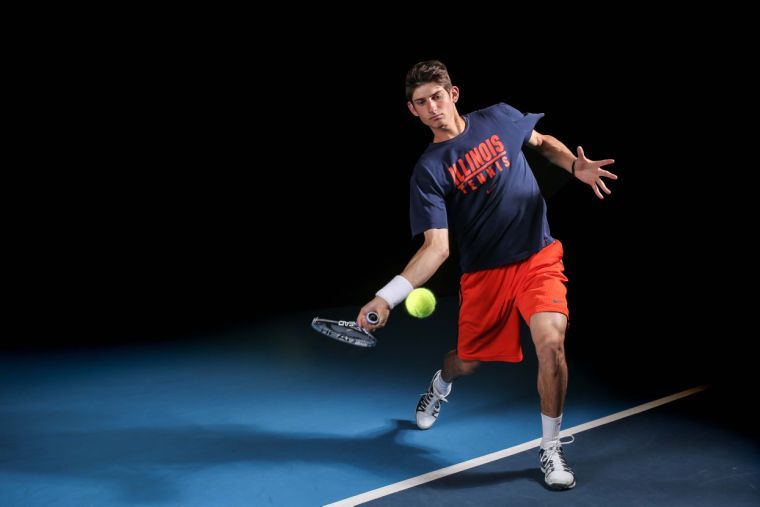 Jared Hiltzik is on the top of Illinois men’s tennis right now.

As most expected of the No. 4 singles player in the country, Hiltzik finished the Illini Open, hosted by Illinois in Fort Myers, Fla., undefeated against the singles competition and held a 2-1 record as the No. 31 ranked doubles duo with teammate Alex Jesse.

His three straight-set victories were clean, his moves were confident, and his skill was apparent. On the outside, this performance seemed to say this was the same Hiltzik as last year, just with a year of competition under his belt. And on the surface, it might be the appropriate analysis.

But internally, 2014 welcomes a new Jared Hiltzik, one who used his experiences last season to transform into a calmer, more balanced student-athlete who can now enjoy life both on and off the court.

“It’s something that last year I really struggled with a lot,” Hiltzik said. “Just really freaking out about, ‘Oh, I’m going to college and trying to be a professional tennis player, I’m losing four years doing that.’”

Even before leaving his home in Wilmette, Ill., Hiltzik knew his end goal. He wanted to become a professional tennis player, and going to college at Illinois was simply his next step in reaching that goal. But once he arrived, college became something much more — and very real.

From a new girlfriend to figuring out which major to declare, Hiltzik quickly learned what many before him already knew: Life as a collegiate athlete was a juggling act — a difficult one — and his had just begun.

When his first spring dual season arrived, life was happening all around him. On top of school and social life, Hiltzik had just arrived at the meat of his first season, with the expectation of 2012 top tennis recruit still looming over him. He would be the first one to tell you it was challenging to get through.

“It was a big struggle last year, just coming in with high expectations as a freshman, just being the top in the country, and just really expecting to have a big mark,” he said.

And yet, one year later, Hiltzik approaches a similar situation with a different outlook. While the expectations are still there, playing college tennis is no longer just getting through it to him. It’s about understanding the challenges before him and knowing how to best handle them.

“I think I’ve matured a lot with the past year and having good communication with the coaches has really helped, too,” Hiltzik said. “So just being able to stay on track with what I’m trying to do has made sure I don’t think about (the pressure) too much.”

Communication, Hiltzik said, has been the most important part of adjusting into his role. Being able to communicate his worries and concerns has allowed him to tackle each one without it interfering with his tennis game.

“I used to keep everything internally, and having more of an external mind set has really helped.”

By communicating his goals and feelings better, Hiltzik now has the luxury of being able to focus exclusively on improving his technique day-to-day with only his own expectations on his mind.

“That’s what he does best,” head coach Brad Dancer said. “He just stays in the moment and plays really hard.”

Dancer said he has already noticed a growth in Hiltzik’s performance this season, which has led to sharper play and more confidence in his game.

“He’s got incredible balance,” Dancer said. “He has a great time with his teammates, he’s friends with other people, he does a great job of communicating with our network of alumni and so forth, and I think he’s setting himself up for a bright future in tennis and outside of tennis.”

Standing on the courts of the Atkins Tennis Center, Hiltzik doesn’t have life all figured out. There are still worries and expectations, but his head seems to be held a little higher. His smile seems to be a little wider. Because now that he’s gotten his balance, he isn’t in such a hurry to be the Jared Hiltzik of the future. The Jared Hiltzik of right now is just fine.

J.J. can be reached at [email protected] and  @Wilsonable07.