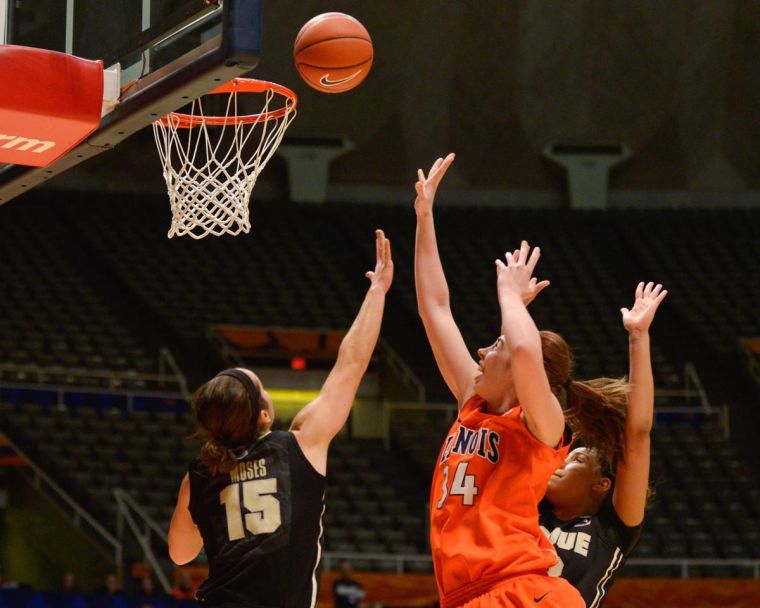 A return home was not so sweet after all for the Illinois women’s basketball team.

After three consecutive road games, Illinois (9-11, 2-5 Big Ten) returned home to an 80-68 loss against No. 19 Purdue (15-5, 5-3). The Illini never led but kept within striking distance throughout the game, although the team couldn’t get over the hump.

Boilermakers sharpshooter Courtney Moses led the team with 22 points, including four 3-pointers. The senior came into the game leading the Big Ten in three point percentage (47.7 percent) and ninth in the conference in scoring (15.3 points per game). April Wilson chipped in 15 points, eight rebounds and five assists on six-of-nine shooting for Purdue.

“If you look at (Wilson’s) stat line, it’s one of the best stat lines I’ve seen in a long time,” Purdue head coach Sharon Versyp said. “Our three guards, if you look at the scoring with only six turnovers, and the rebounding, those three really did a phenomenal job.”

Jacqui Grant led the Illini with a career-high 22 points, seven rebounds to go with four blocks and two steals. Alexis Smith paced the offense with 13 points and six assists, while playing the entire game.

Ivory Crawford continued her productive play for the Illini early in the game. Crawford notched 10 points and eight rebounds in the first half alone, but foul trouble limited her playing time. The junior picked up her second foul with 5:48 left in the half and sat out for a short break before picking up her third with just under three minutes to go.

Crawford returned in the second half, only to pick up her fourth foul almost immediately. Crawford was whistled for an offensive foul with 18:28 left in the second half. The Illini thrived in her absence, however, going on an 18-11 run to pull within two with 9:29 left.

When Crawford reentered the game, however, the Boilermakers ripped off a quick 7-0 run, forcing an Illini timeout. After that point, the lead was never less than nine. After her stellar first half, Crawford was held to 2-6 shooting and only one rebound in the final half.

“When you get in close, you can’t stop there,” Illinois head coach Matt Bollant said. “You’ve got to be able to take the lead and keep the momentum going.”

Purdue entered the game third in the Big Ten in scoring offense at 75.1 points per game and carved up the Illini with crisp ball movement early in the game. Five of Purdue’s first seven baskets came via assists and the Boilermakers tallied 38 points in the first half. The Boilers had multiple chances to pull away early — pulling ahead 20-9 and 31-20 — but Illinois had an answer for every run to keep the game close.

The Illini played its zone defense through most of the game, though it didn’t slow the Boilermakers’ offense. Purdue shot 46.9 percent from the field and 37.5 percent from beyond the arc. Illinois averages +6.5 turnover differential for the season, but the two teams were even at 16 giveaways apiece.

Point guard Sarah Hartwell left the game and didn’t return after a hard fall in the second half, but Bollant said she could’ve returned if necessary.