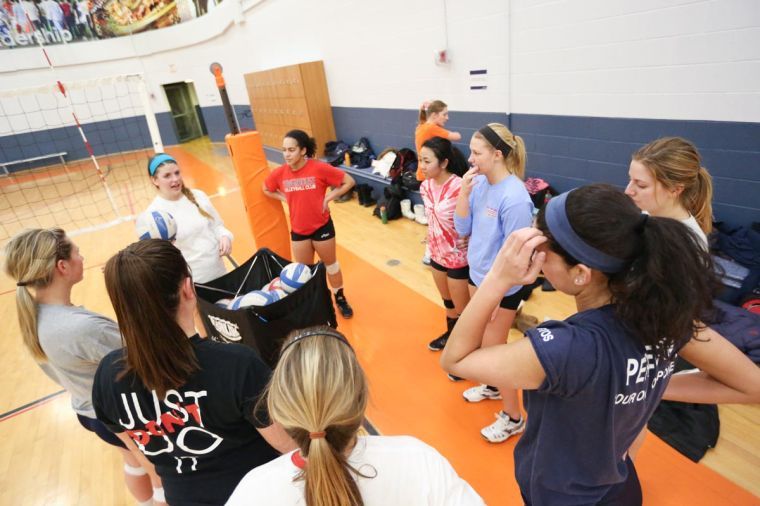 The Illinois women’s club volleyball team gathers during a break in its practice on Monday.

Dodging loose balls and weaving between the remaining basketball players in Gym 2 of the ARC, the members of the Illinois women’s club volleyball team warm up to a mix of chatter and the voice of Vic Mensa coming through the speakers. The last of the basketball athletes clear out as the volleyball team starts its practice in preparation for hosting its first ever Big Ten tournament at home on Feb. 1.

It’s 6 p.m. on a Sunday, and the gym atmosphere is a far cry from the 6 a.m. practices sophomore and B-team member Shannon O’Brien used to attend when she played Division I at Cornell last year. O’Brien is one of four team members who played Division I volleyball at other universities but, since transferring to Illinois for financial reasons, has joined the club volleyball team. But it was more than just financials that caused the four of them to transfer.

“Those morning workouts were the worst because I’d have to wake up at 4:45 a.m.,” O’Brien said. “There were some mornings where I’d just get up and throw up. I was just exhausted. The academics were crazy, so I’d get to bed at midnight after all my schoolwork and wake up four hours later. I was in a haze basically all of last year.”

Though the transition from Division I to club seemed daunting, O’Brien and the others have weathered it with ease. Playing volleyball to them feels more like a passion again, not just a job.

“There’s no coach, so I wasn’t how sure it was going to be,” said Cami Beghou, a sophomore on the A team who played Division I with Lafayette College before transferring this year. “But I think it makes us closer as a team as opposed to worrying about our own personal goals. You have to be mature and step up. But you still get play and have that team vibe.”

With 26 women split between an A team and a B team, both teams have played well this year using the mix of club and collegiate careers to their advantage. The A team is ranked fifth overall in the National Collegiate Volleyball Federation (NCVF) after placing in the top three in all their fall tournaments. The B team is ranked 10th in their division of the NCVF.

“We’re all doing this because we want to,” said Maureen Stroka, a senior and the team’s president. “It’s more about playing the game we love and less of an obligation.”

The tournament, which is the first of the season at home, will include a mix of about 20 A teams and B teams from the Big Ten conference and will begin about 8:30 a.m. on Feb. 1 in Gym 1 of the ARC.

The team uses scrimmaging at the end of almost every practice to gain a better grasp of game situations and improve as a team. Sometimes, however, the inspiration for the drills run in practice can come from an unlikely source.

Junior Caitlin Ori is not only a member of the A team but has also held a team manager position with the Division I Illinois volleyball team since last February. Attending every practice and home game, Ori has become an integral part of their team.

Balancing playing on the club team and managing the Division I team, she has made friendships with both sets of girls while finding ways to intermix the two along the way.

“I’ll come into practice sometimes being like, “Oh, (the Division I team) did this one drill, and I know that’s what we need,” Ori said. “It clicked with me that we need to work on that, too.”

The hours of practice and layers of insight are all in preparation for the NCVF Collegiate Club Volleyball Championships in Reno set for April 3-5.

Though it still proves to be a balancing act between the schoolwork, social functions and extracurriculars, volleyball has been an ever present and, as the women hope, ever future aspect in their lives.

“There are days I’d think, ‘Is this what I’d want my college experience to be remembered as?’” Ori said. “But then I go to the practices and I’m just like: ‘Absolutely.’ I couldn’t imagine my life any different.”