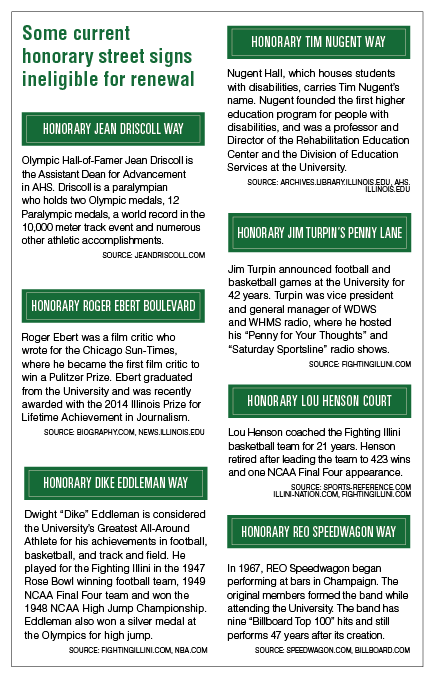 When driving through the city of Champaign, people can see street signs honoring those who have made an impact on the community.

The Champaign City Council passed an ordinance at its Jan. 21 meeting that revises the application policy and implements more selective criteria for honorary street designations.

“We were looking for a way to formalize the process and make it more streamlined, as well as to make sure there is criteria and the criteria’s applied to anyone who is requesting (honorary designation),” said Kris Koester, public information officer for Public Works.

The new policy limits honorary designation to those that have had a significant cultural, historical or humanitarian impact on the city, as opposed to the old policy that simply required significance to the city.

Last year, the city spent $13,000 on honorary street designations. In order to cut spending to $4,000 per year, the new policy limits the designation to one block, there is a limit of four designations per year, and the city will no longer fund the dedication ceremonies.

“It was nice for the city to take care of (the arrangements), and I’m sure the families appreciated it, but it was still a cost to the city and we need to be more prudent with taxpayer dollars,” said Karen Foster, council member at-large.

The new policy does not allow renewals of honorary street names, as opposed to the former policy, which allowed individuals to apply for renewal every 10 years.

“I think this offers an opportunity for the sign to be a catalyst for something else,” said Mayor Don Gerard. “Once someone has had a tribute … a number of things could happen … and it will give us an opportunity to display elsewhere in mass the signs that have been taken down.”