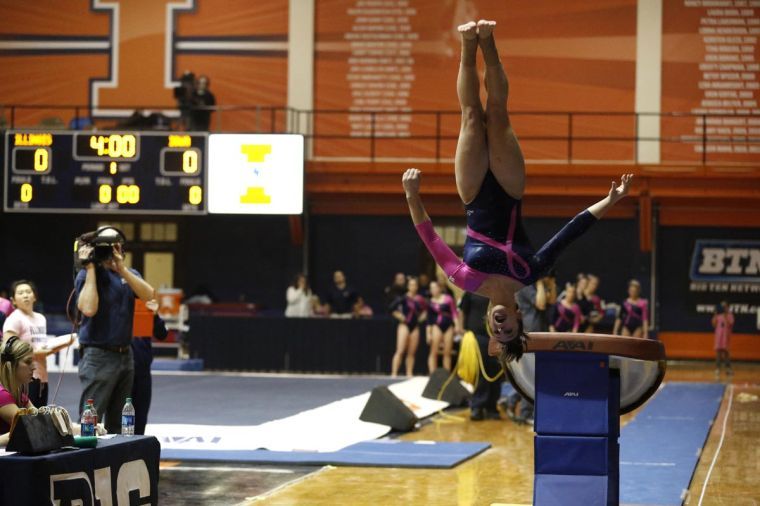 Illinois’ Giana O’Connor competes her vault pass during a dual meet against Iowa at Huff Hall on Friday. O’Connor placed third with a score of 9.800, and Illinois defeated Iowa.

The Illinois women’s gymnastics team bounced back from its first loss of the season with a 196.475-195.050 win over Iowa at the annual Pink Meet on Friday.

“It feels great,” head coach Kim Landrus said. “We came out, and we scored over a 49 on four events. We did so many great things today that I think that we’ll build off of those.”

Following the ceremonial beginning to the Pink Meet, which aimed to raise breast cancer awareness, the Illini were on vault, where they achieved a new season-high score of 49.025. This was the first team score over 49 on vault this season.

From there, they headed to the uneven bars and had a trend of stuck dismounts. This prosperity led to a score of 49.250, their best of the night and a new season-high. It also resulted in all six Illini placing in the top four with ties for first and fourth place. Illinois was able to carry its momentum from vault into bars, and utilizing that momentum is something Landrus has emphasized.

“We need to continue to build,” Landrus said. “It’s four events. It’s 24 routines, and that was one thing that I did think we did well.”

Illinois continued the meet at the balance beam. It was a solid event in which the Illini totaled a score of 49.025, an improvement from their last meet at Minnesota.

“We had four really good performances,” Landrus said. “We had one performance that I was so proud of her, Sarah Fiedler. She had a big wobble, but she fought up there, and she stayed on the beam. I couldn’t be more proud, and I think it taught our whole team a really good lesson.”

To conclude the meet, a strong finish on floor sealed the win. On the second routine, however, junior Kelsi Eberly stepped out-of-bounds on her first tumbling pass. This led to a score of 9.625. The remaining gymnasts stepped up, though. All four of them scored a 9.800 or above.

“I thought those last four competitors really went out and did their job and finished really strong,” Landrus said.

With all of the team success came a plethora of individual success. Illinois swept all of the events and took two out of three spots in all-around. Freshman Erin Buchanan earned a new career high on vault with a score of 9.875. This gave her the vault title, the first of her career. It also ended senior Amber See’s vault winning streak at three.

On beam, junior Sunny Kato and senior Elizabeth McNabb each scored a 9.900, giving them the tie for first place. This also gave McNabb a new career-high beam score. As for Kato, she stuck her beam and bars routines.

Despite a strong victory over Iowa, though, Illinois is still striving for me.

“We have such high standards this year, and I want to make sure that those standards we continue to reach for,” Landrus said.