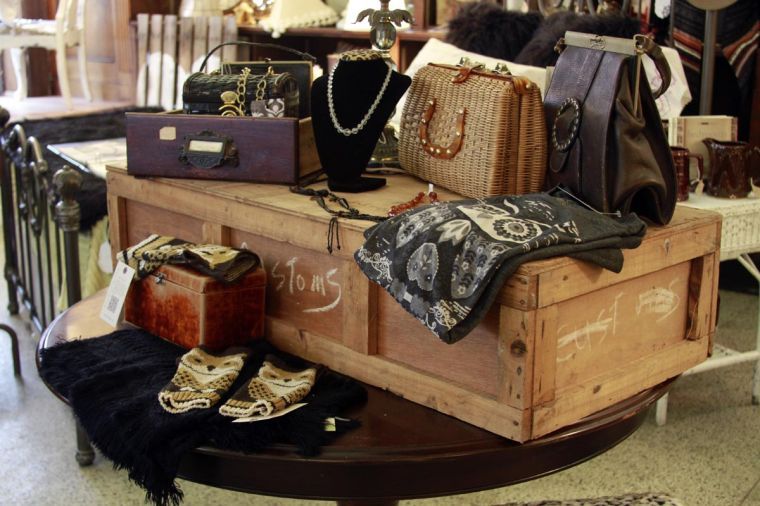 Nestled on the corner of Main and Race streets in downtown Urbana stands Bohemia, a new vintage store that opened on Nov. 15. Owned by Champaign-Urbana’s Milea Hayes and Laura Young, the store is named for its “Bohemian-like style,” an aesthetic summarized by its motto: “a unique blend of vintage home décor, apparel, and artist creations with a vintage vibe.”

Among many things, the shop, located at 135 W. Main St., features both modern and vintage clothing, such as sweaters priced from $48 to $98; handcrafted jewelry ranging from $8 to $175; original paintings ranging from $35 to $550; and a variety of small trinkets and cards. Bohemia is also selling Valentine’s Day cards handmade by a local artist for $4.

The store’s most dominant theme, however, is its selection of repurposed vintage furniture and light fixtures, which Young and Hayes search for throughout the year at a variety of flea markets, auctions and estate sales in places as far as Chattanooga, Tenn. Both women say the “hunt” for new items is their favorite part about the business. Young’s all-time favorite purchase is a vintage green counter she bought in California that has now become their store counter.

“You just don’t ever know what you’re going to find,” Hayes said.

In addition to these items, Young and Hayes offer to repaint or reupholster any piece of furniture brought to them by a customer and will even bring furniture into clients’ homes to help them stage it. They also offer to stage furniture for customers’ photo sessions.

As well as co-owning Bohemia, Hayes also runs a wedding rental business called Flower Girl Vintage, which she started about a year ago. The idea came to her after she planned her daughter’s backyard wedding with a vintage theme. The wedding was complete with vintage bathtubs to hold beverages, mismatched vintage plates at all the tables and chandeliers hanging in the tents. Hayes said she struggled with finding certain pieces, and thought, “Does it make sense to go out and buy all of these things?” Thus, Flower Girl Vintage was born, with the idea that she would rent out anything vintage that people might need for weddings.

Hayes runs Flower Girl Vintage from the same location as Bohemia: Urbana’s historic Knowlton and Bennett Building on Main Street, a 1920s-era building which once housed both a drugstore and bookstore. Young said she was ecstatic when she saw the space was for rent because she had known about the building for years.

“There are people that come in here and say they used to buy their school supplies here,” Hayes said.

Both Hayes and Young believe their location is the perfect location for a vintage store because of its charm; they feel it is a “happening little spot.” Hayes also thinks it is a good option for college students getting their first apartment and “finding a fun piece or two for their new place.”

Kailey Luzbetak, senior in LAS, said a vintage store works well in a college setting because of its unique nature.

“Since vintage stores tend to be individual businesses as opposed to chains, students can get unique clothing pieces and not have to get sick of seeing all of their peers wearing the same shirt as them,” she said.

Young said she first became interested in the vintage business when she moved to California after college and tried to decorate her place on a small budget. It was during this time that Young also started painting, something she still continues today. Some of her paintings and palates are sold in Bohemia.

“I was amazed at the stuff people would throw away,” Young said. “I would take items out of people’s trash — lamps and tables — and take them home and fix them and paint them. People would come over and say, ‘Wow, your place is so cool,’ and it was basically all stuff I had just fixed up.”

Young, who moved back to the Champaign-Urbana area from California about a year ago, said she saw the need for a vintage store in the area while she was trying to decorate her new place. Young had previously met Hayes at another local vintage store while visiting the area, and after Young returned, they decided to start their own business.

As for the future of the store, Hayes said they hope to continue doing more of the same, as well as expand their furniture refurbishing and do more with interior design.

“We are live in the moment people,” she said.