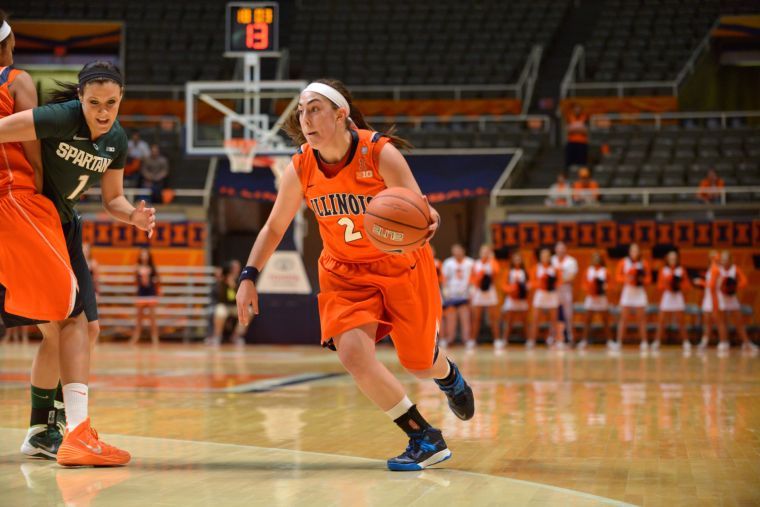 Illinois’ Taylor Gleason (2) dribbles the ball during the game against Michigan State at State Farm Center on Wednesday, Feb. 5, 2014. The Illini lost 69-53.

The same problems continued to plague the Illinois women’s basketball team Sunday, despite the perpetuation of a couple of fresh new faces in the starting lineup,

Generating offense was once again an obstacle the Illini could not overcome, as they lost a late lead to Minnesota and, in turn, the game 66-61.

Junior guard Ivory Crawford, the team’s central source of offense, was limited to 25 minutes because of foul trouble. Despite the limited playing time, Crawford finished the game with 18 points on 5-of-8 shooting to go along with six rebounds and four blocks. Freshman forward Jacqui Grant also missed her second consecutive game after contracting mono.

“We really fought for 38 minutes and did a lot of good things and just felt like we got caught up a bit in the outcome going down the stretch,” head coach Matt Bollant said. “Give Minnesota credit, (Rachel) Banham hit some big shots and (Amanda) Zahui inside, those two were a little too much for us down the stretch.”

Both teams remained within striking distance for the majority of the game, until Illinois was able to attain a seven-point lead with four minutes to go. The lead didn’t last much longer, as the Gophers became more aggressive offensively, driving to the basket at will and drawing a series of fouls to eventually take the lead. Of Minnesota’s 12 made free throws, eight of them came in the final four minutes of the game.

The lack of Grant’s presence in the post forced the Illini to become a jump shooting team. Illinois fell in love with the 3-point shot but couldn’t get it to fall at an efficient rate, shooting 29.6 percent on 8-of-27 shots. Freshman forward Sarah Livingston, who filled in for Grant, simply could not match the effectiveness of Grant on either end of the court. In 37 minutes, Livingston was efficient from the field, hitting 4-of-7 shots for 10 points but managed to grab three rebounds despite being the tallest Illini on the floor at 6-foot-2.

Livingston’s opposition in the post, Zahui, fought off constant Illini double teams to the tune of 23 points, 12 rebounds, three blocks and three steals. The 6-foot-5 freshman was pivotal as well down the stretch, as she scored 10 points in the final five minutes of the game. Zahui also generated the game-ending steal with five seconds left and Illinois down three.

“I thought we did a good job in the first half getting double teams on (Zahui) and making it tough after a poor start guarding her,” Bollant said. “It really was the start and the finish by her that we didn’t do a really great job on.”

Freshman Taylor Gleason made a case for steady playing time. The guard had a solid all-around game, finishing with 11 points, three rebounds, two assists and two steals in 32 minutes.

The loss marks the sixth in a row for the Illini and the 11th of the last 13.