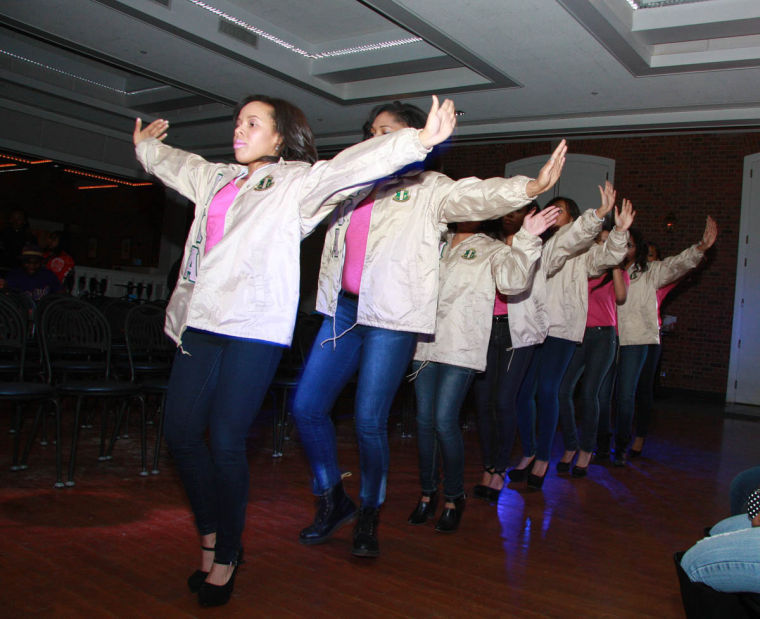 Courtney Gilbert, a junior in AHS in the Alpha Kappa Alpha Sorority, leads the stroll at the AKA 100th Anniversary Stroll Competition at the Illini Union Courtyard Cafe on Monday. Alpha Kappa Alpha returned to campus in 2013 after being away for seven years.

Feb. 12 marks the 100th anniversary of the University’s Chapter of Alpha Kappa Alpha sorority. To honor Alpha Kappa Alpha’s centennial, Feb. 12 will now be marked as “Gamma Day” in the state of Illinois by Gov. Pat Quinn, in the city of Champaign by Mayor Don Gerard, and in the city of Chicago by Mayor Rahm Emanuel. Following “Gamma Day,” the weekend of Feb. 14 – 16 will be dedicated to the legacy this organization has left on the University’s campus and beyond.

Beginning Friday, the campus will be filled with alumnae and the 33 active members of the sorority, sporting Alpha Kappa Alpha’s signature pink and green. Jolynn Caroline, a graduate adviser to the Gamma Chapter,  “Gamma Girl,” and director of Career Planning and Professional Development in the College of Law, said alumnae will be coming from as far as California and Florida to celebrate this historic event.

The weekend will be packed with different events, all paying tribute to the chapter’s current members and alumnae. Saturday will begin with The Centennial Marker Dedication Ceremony. The lounge of Bousfield Hall, the campus’s newest residence hall, will be dedicated to a former Alpha Kappa Alpha international president.

Caroline noted that this dedication means a lot to the chapter itself, but it also is important for the University as a whole.

Later that evening, State Senator Toi Hutchinson (Gamma ‘92) will be the keynote speaker at The Centennial Anniversary Gala, where a $100,000 endowment fund will be presented that will provide scholarship awards over many years. Sunday will include a group photo of the attendees and a send-off brunch with Gisele M. Casanova, Central Regional Director of Alpha Kappa Alpha, as the keynote speaker.

According to active members, Alpha Kappa Alpha has been dedicated to sisterhood, service work and campus involvement since the beginning of its charter. Most recently, members volunteered at a variety of charity and philanthropy events around the area, including the Martin Luther King Day Unity Breakfast and the Books to Prisoners service project, and working with the Don Moyer Boys & Girls Club in Champaign.

Samantha Chatman, Alpha Kappa Alpha member and senior in Media, said the women of the sorority embodied what she wanted to be, and she knew they were the right group of women to surround herself with.

“My mentor, she is a former member of (the) Gamma Chapter, and she pretty much exemplifies the woman that I’ve always wanted to become … She told me so much about (the chapter’s) history and what the women of Alpha Kappa Alpha stand for. Since that day, I always knew it was something I wanted to be a part of.”

The Gamma Chapter of Alpha Kappa Alpha was the first chapter to be chartered at a predominantly white university. When the sorority was first chartered at the University in 1914, African-American students were not allowed to live on campus. About 15 years later, the Gamma House was established, providing housing for members while they attended school.

After taking a seven-year hiatus, the most recent class of Gamma girls were initiated Nov. 17, 2013. Chatman said that the return of the chapter was perfect timing, and she was happy it returned before she will graduate.

“I’m a fourth generation member of Alpha Kappa Alpha. I’ve always been raised around women that were a part of the sorority, so they’ve always been role models to me,” Wright said. “When I found out (the) Gamma Chapter was coming back to campus I was just ecstatic. It was a dream come true.”

Editor’s note: A previous version of this article incorrectly stated that Alpha Kappa Alpha is awarding a $100,000 scholarship on Saturday. It should have said that the $100,000 endowment fund will provide scholarship awards over many years.

The article also incorrectly stated that Bousfield Hall, not the lounge, will be dedicated to a former Alpha Kappa Alpha internal (should be international), president.

The article and caption also incorrectly stated that the chapter returned after a nine-year hiatus, not seven.