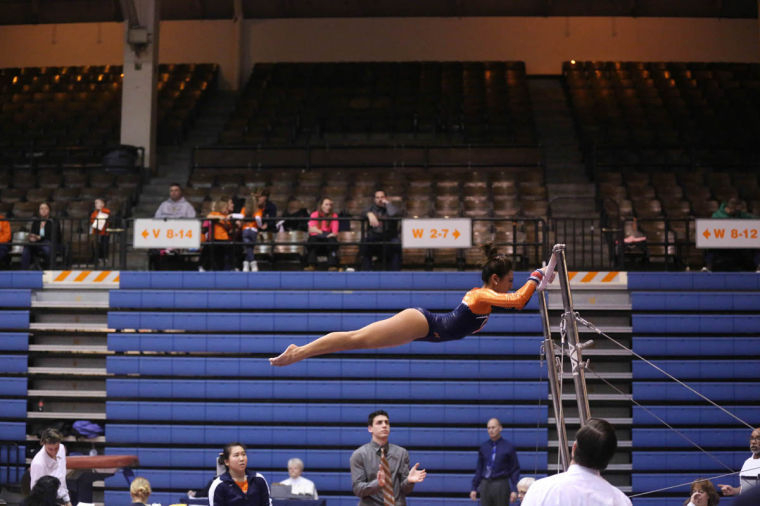 Illinois’ Sunny Kato preforms her routine of the uneven bars during the meet against Michigan at Huff Hall, on Feb. 7, 2014.

The difference was as small as 0.025, and it was never larger than 0.175. Again finding itself in a tight contest, the Illini again lost a close meet.

Illinois lost its second close match in a row to Penn State, as it lost to Michigan by 0.225 last weekend. The defeat, however, didn’t prevent the team from being proud of the meet. Although they lost 196.675-196.500, the gymnasts are still proud of their performance.

“It’s really about our performance, and I have to say we went out there, and we had a new team high score,” head coach Kim Landrus said. “And we did some great gymnastics and great routines. I think everybody’s a little bit disappointed that we didn’t come out with a win, but we’re really happy with so many of the things that we did do.”

The Illini began on the uneven bars, where they scored a 49.100. This was enough for them to lead by 0.100 after the first rotation. Following that, the team headed to vault. This was the only event where it failed to score above a 49, finishing at 48.975.

“It all comes down to dynamic vaults with good landings,” Landrus said. “There were probably a couple performances (Saturday) that we need to make sure that the vault is a little bit more dynamic, and our landings will be just a little bit better. We’ll continue to work on that stuff in practice.”

Following vault, Illinois competed on floor. There, the team combined to score a total of 49.250, their highest of the meet. This also allowed them to take back a lead over Penn State, surging ahead by 0.025. The Illini then finished on the balance beam, where they were ranked No. 11 in the nation entering the weekend.

“We went to the balance beam, and we didn’t let anything faze us,” Landrus said. “We just went out there, and we did what we did every day in practice. We scored a 49.175 on beam, which is definitely a score to be proud of, and I was really happy with the way the girls went over to beam and just did what they do every day with confidence.”

Despite the loss, the Illini took home three individual event titles. Junior Sunny Kato won her third title on uneven bars this season with a 9.900. Sophomore Giana O’Connor’s 9.900 on floor gave her first place. Both Kato and O’Connor tied their career high scores for the respective events.

Freshman Emily Lennon won her first title by scoring a 9.900 on the balance beam. This also gave Lennon a new career high on the apparatus.

“We knew she was capable of putting up a high score on beam if she just goes and does the beam routine flawlessly,” Landrus said of Lennon. “She’s beautiful to watch, and she really did do such a great routine that really probably captivated the audience today.”

Although there were three near-perfect routines, the loss has further emphasized the importance of details.

“Every little thing matters,” Landrus said. “I mean, this is the second weekend in a row that we lost by a very small margin.

“We just have to continue to work … and get every tenth we can in our competitive routines.”