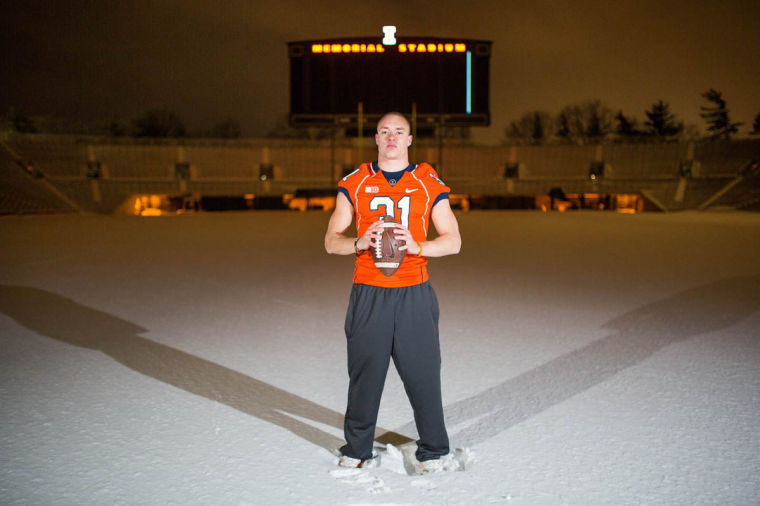 Every day starts at 5 a.m. for Les Poole, when football practice preludes a full-time student class schedule. Accounting and finance coursework in the afternoon then leads to returning to his Resident Adviser duties at Bromley Hall. At night, when he is not working at Bromley’s front desk, he attends events for both his business fraternity, Delta Sigma Pi, and social fraternity, Pi Kappa Alpha.

Not many students can say they are as busy as Poole, a junior in Business. It is a constant balancing act to be involved in all of his activities and do well in school, Poole said, but he loves being a part of them. With academics and football at the top of his priorities, it is a challenge to factor in everything else.

Poole said the key to balancing it all is organization and time management.

“If you think that you can get something done, you can find a way to get it done,” he said.

Poole tried out for the University’s football team and became a wide receiver during his freshman year. He has always wanted to play at Illinois since being a football player from a young age. The sport has since challenged him with its constant surprises and has encouraged his competitive nature. Poole admitted joining the Illinois team was one of the best decisions of his life.

“It’s a dream come true and an awesome opportunity,” Poole said. “It’s not an opportunity that a lot of people get.”

Poole said that his parents are hard workers, and he follows them by example at the University.

“My parents were influential. I have a strong work ethic because I’ve seen how much they’ve put into what they do,” he said.

Teammate Zach Grant, sophomore in Education, said he admires Poole’s friendly disposition, loyalty and dedication. Poole was one of the first people to step up and talk to Grant when he was new to the team last fall, he said. Grant was struck by Poole’s drive to always get better and how he cares about everybody on the team.

“He’s always in a good mood and always has a joke to tell in the locker room,” he said. “He’s not only a player but a true fan and believer.”

Aside from spending time on the football team, Poole works around the clock as an RA at Bromley Hall. He said he applied as a freshman because he wanted to develop leadership skills and have fun.

“I don’t think of it as a job but as a cool opportunity,” he said. “I’ve met a ton of people there who I’ve built strong connections with.”

One of his fellow RAs that he has gotten to know is Sam Saban, junior in Education, who said Poole is known at Bromley as the “goofy one.”

Poole said he enjoys the company of the residents on his floor. As a well-rounded group that is social and fun-loving, the residents are not a hassle, Poole said, because they behave themselves.

“They make my job easier and more enjoyable,” he said.

If not at Bromley or playing football, Poole spends time with his fraternities.He joined Pi Kappa Alpha during the spring of his freshman year to branch out and meet more people. He chose Pi Kappa Alpha because “it felt like the right fit,” and also that he mixed in well with the members.

Out of all the people he has met and the strong relationships he has built, Poole’s favorite aspect of Greek life is his brothers. He described them as people he can envision being at his wedding in the future.

“He has so much on his plate; how he handles it is beyond me,” said Conor Donohue, also a junior in Business and fraternity brother of Pi Kappa Alpha. “He’s the most hardworking individual I know. I’m proud to call him my friend.”

Poole then decided to join Delta Sigma Pi Business Fraternity during the spring of his sophomore year to meet people in a more mature setting than his social fraternity and to develop more professionally.

In Delta Sigma Pi, Poole said he participates in events such as competitions between other business fraternities, as well as mock interviews, resume critiques and talking to employers.

“It helps you improve yourself for when you get into the business setting,” he said.

Although his activities take up a lot of his time, Poole said that school is his first priority. However, he likes that they give him a chance to escape the stress and have fun, he said.

After completing his bachelor’s and master’s degrees in accounting, Poole plans to work for one of the Big Four accounting firms. Down the road, he is considering teaching business and coaching football at either the high school or college level.

Poole said that when life becomes stressful, he reminds himself that at the root of it, he loves what he does.

“At the end of the day, I put my head on the pillow and know the reason I keep going,” he said.