University stunt and tumble more than fun and games 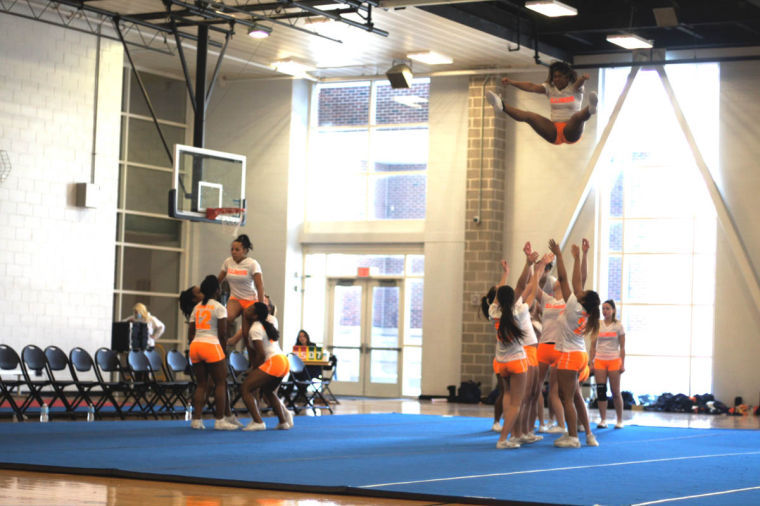 The Illinois stunt and tumble team performs Sunday at the ARC. The team won its two competitions against Northern Illinois and lost its two against Michigan State.

Tucked in a corner of the ARC’s east gym, the Illini Stunt and Tumble team gets to work early on a Sunday morning. There’s no pom-pom waving, no alligator cheers; here, there are battered knees in protective braces, acrobatic stunts and an aura of competition that isn’t new to the sport of cheerleading. And on this occasion, Illinois faces Michigan State and Northern Illinois.

While some overlook this as a sporting event, Sunday’s Stunt and Tumble session is every bit a competition. These choreographed routines are as intricate as football plays, with every team member playing a role. In football, if the linemen aren’t ready to block, the quarterback gets hit. One slip up in a stunt and the tumbling routine could prove disastrous for the flyer, who is tossed amid a complex routine of precise movements.

A usual competition consists of a stunt sequence, pyramids, tumbling sequences and a dance at the end. College stunt is a new tournament format developed to promote the athletics skills of competitive cheerleading. In this format, teams compete head-to-head using essential routines that vary in difficulty, ranging in ascending order from one to six. There are four quarters in a stunt game: the first quarter consists of partner stunts, the second of pyramids and basket tosses, the third of jumps and tumbling and the fourth of a group routine combining elements of the previous three quarters. Each quarter has four rounds where teams get to choose the level of difficulty depending on who has possession of the game.

There is a lot of mutual respect and camaraderie that comes into play in stunt and tumble, even between opponents. Teams clap to show good sportsmanship every time a winner of the competition is announced, regardless whether it’s a member of their team. And when the competition concludes, the competitors roll up the mats together.

Going 2-2 on the day, two losses to the Spartans and two wins over the Huskies, head coach Kevin Burnside felt good about his team’s performance Sunday. He also wants people to know there is much more to cheerleading than the general perception.

“I want people to know it’s not only about smiling and being peppy, it actually is athletic,” Burnside said. “That’s kind of what the whole point of stunt is, it’s showcasing the athleticism that is involved with cheerleading.”

Although the Spartans swept the Illini on Sunday, the event was just a stepping stone to the big dance on April 9 in Daytona Beach, Fla., where the three-day National Cheerleader Association Collegiate National Championship will be hosted. The Illini will be competing against 15 other Division-IA schools, including Michigan State and Northern Illinois.

From now until April, the squad’s focus will be preparing to take on teams similar to Michigan State, which Burnside felt brought a nice competitive vibe and have a “good rivalry” with his squad.

This year is also one of change for Illinois, as the team lost many of its seniors from last year. The Illini will be looking to build a foundation for success this season, one that will propel them into top spot in nationals in the years to come.

But Burnside is still setting the bar high for the Illini, who took second place at nationals in 2012 before losing squad veterans to graduation.

“It definitely helped us realize that we need some improvement on some skills, but it was really good to be able to compete against the other teams and see how we measure up,” Salerno said. “I think we ended up pulling it through very well. We started off a little shaky, but we got it together and we were really working hard to finish off strong in our final game.”

Salerno also said team dynamics is especially important to pull off the complexities of the choreography.

“Cheerleading is definitely a sport where you have to have 100 percent trust in your teammates,” she said. “You’re throwing them so many feet in the air, and they need to trust that we’re going to catch them.”

Junior captain Kilani Gaston comes from a family of cheerleaders, with both her mother and grandmother taking up the sport before her. Gaston has been cheerleading since she was four and has watched the sport gradually evolve into something bigger, as evidence by the new stunting format.

“I think it’s just on the basis of considering cheerleaders as more athletic as before,” Gaston said. “That’s what stunt is about; cracking down on the technique, cracking down on every little piece of routine that you have that you’re trying to perform. It’s just creating a different realm of cheerleading that people haven’t really seen before. When it’s big enough, people will start to realize that cheerleading isn’t just sideline cheering.”