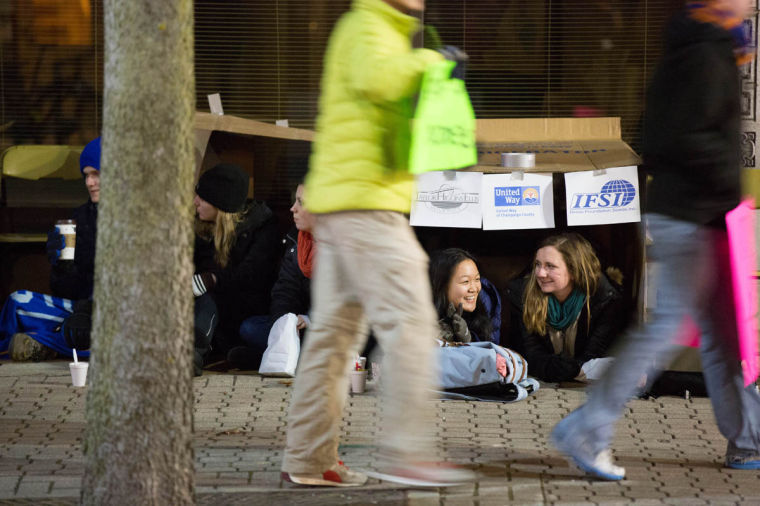 Jolie Huang and Catherine Kemp, sophomores at the University of Illinois, speak to each other in their cardboard structure for One Winter Night, which happened in downtown Champaign, on Fri., Feb. 21st.

About 500 people sleep somewhere other than their home each night in Champaign County, according to C-U at Home’s website.

C-U at Home hosted its third One Winter Night on Friday. Participants spent the night outside from 6 p.m. until 6 a.m. sleeping in cardboard boxes to experience what it is like to be homeless.

“I’m happy for the event, but it’s a painful one,” said Mayor Don Gerard, who has attended the event for all three year. “I have great respect for everyone who participates because it’s not an easy thing to do.”

The funds raised from the event will go toward opening a daytime drop-in center. The goal was to raise $1,000 per public figure participating, according to the event’s website. Thirty participants committed to the event.

“This year’s theme of trying to get a daytime warming center really hits home after the extraordinarily bitter cold we had this year,” Gerard said.

Kristen Cantieri, junior in Business, participated in her second One Winter Night this year. As a University Stamps Scholar, she and 11 other members of the scholarship program participated in the event and raised funds throughout the week.

“It brings light to us as college students that there is homelessness that we’re not experiencing because we’re in our college bubble and we don’t see that,” Cantieri said.

The Stamps Scholars Program financially supports students, and in return, the students are challenged to “create opportunities and inspire others to achieve and thrive in their lives.”

Cantieri said participating in One Winter Night two years ago changed her life.

“I had never been so happy to be in my own bed than I was after that night,” Cantieri said. “Prior to (sleeping) we were sitting asking people for money just like the homeless do, and that feeling of being ignored and not heard — I can actually almost sympathize with them now.”

After participating in the event, Cantieri began talking to the homeless she sees, and she tries to help them.

Like Gerard, Karen Foster, city council member at-large, participated in her third One Winter Night this year. Aside from attending the event, she occasionally counsels families in need.

“I’ve gotten to know a few of the homeless people in our town personally, and I think their stories have made an impact on me that I want to help,” Foster said.

Foster and Gerard feel that Champaign attracts the area’s homeless because of the variety of services available.

“People know that we’re a town with a big heart, and they can get some help that they need,” Foster said.

The event took place in downtown Champaign, making it noticeable to visitors on Friday night.