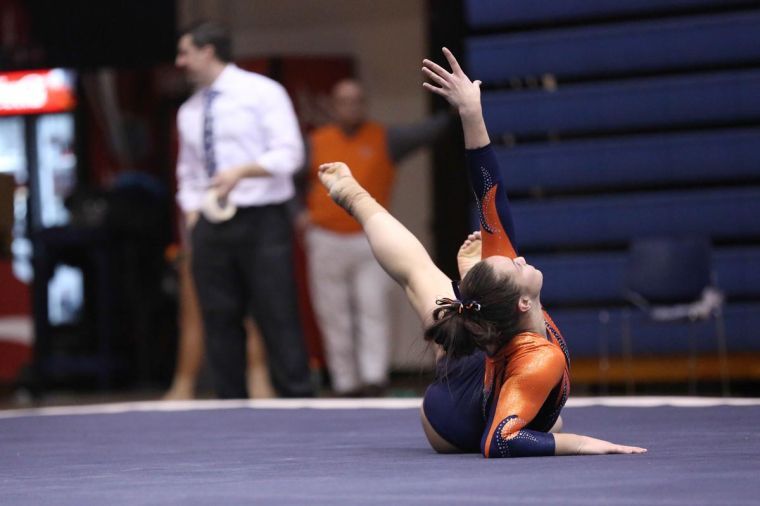 Illinois’ Kelsi Eberly finishes her floor routine during the meet aginast Ohio State and Central Michigan at Huff Hall, on Sunday, Feb.23. The Illini finished first with a score of 196.775.

The Illinois women’s gymnastics team will have a lot of work to do against No. 2 Oklahoma in Norman, Okla., on Friday.

Oklahoma has displayed their talent this season with an average score of 197.411. The Sooners have also posted the highest team total of all NCAA womens teams with a 198.175. In fact, their lowest score on the year was a 196.675, which came during an away meet where the scores are usually in favor of the home team. Illinois has only scored above that once this season. Despite that, this dual-meet is one the Illini are looking forward to.

“It’s always a great opportunity when we compete against the top teams in the country, so we’re excited to go to Norman,” head coach Landrus said. “It’s going to be a great environment and a great atmosphere, and we’re up to the challenge.”

The Illini recently achieved a new season high on the balance beam, an event where they are ranked No. 9 nationally. It’s an event Illinois has come to be known for this season; however, it’s also one Oklahoma receives recognition for, as the Sooners are ranked No. 2. While both them excel on beam, all Illinois can do is go out and focus on themselves.

“Our performance is very independent on how Oklahoma does,” Landrus said. “Although they’re a great beam team, we’re just going to go in and do what we do every day and not worry about them.”

It’s this kind of mindset that Illinois must have to perform well, but they also need to improve upon their last performance to continue their progress.

Illinois’ last meet, a home tri-meet against Central Michigan and Ohio State, resulted in a new season high score, 196.775. This came off the latter end of a double-header weekend, so the Illini were able to correct their mistakes and succeed despite the extra work.

This also led to a two-day practice week for the team; however, it’s more of a much needed rest rather than a break in their rhythm.

“It gives us a little break on our bodies,” junior Kelsi Eberly said of the two-day practice week. “Last weekend was hard … so I think it’s helpful. We just really have to take advantage of the quality over quantity kind of thing this week.”

The Illini also hope to use the bigger crowd to their advantage. Oklahoma holds gymnastics meets at the Lloyd Noble Center. The combination of stadium seating and the large audience of fans Oklahoma typically receives offers a different environment than Huff Hall would.

“They’re not our fans, but we can make them our fans,” Eberly said. “It’s exciting. We all kind of like to show off our skills and show off what we can do, so it’s nice to have a really big crowd. A lot of people will be really excited about it.”

For Illinois, its rising status is something to be excited about. In the past five seasons, the Illini have gone to the NCAA Championships three times. The last Illinois team to go was last year’s group, and there’s a chance for the current squad to make it there again. It’s given the gymnasts motivation to go out and compete. Oklahoma is a challenge for them, but there’s no reason for Illinois to not steal a win.

“We’re a team on the rise, and we’re doing awesome this year,” Eberly said. “So I think we just have to keep that confidence up and go in there acting like it’s our turf.”