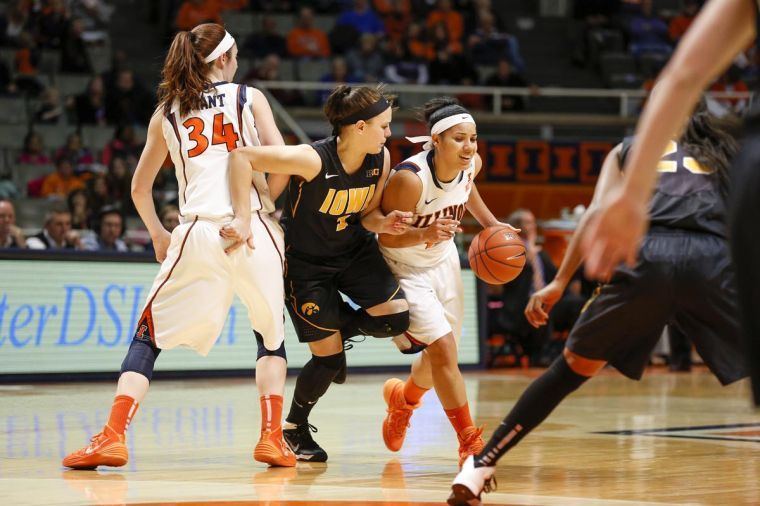 Illinois' Amber Moore (42) drives the ball during the game against Iowa at State Farm Center on Sunday, March 2, 2014.

For the Illinois women’s basketball team, it was more of the same to end a frustrating regular season.

The Orange and Blue (9-20, 2-14) finished the season without a win at home in the conference season — the team’s last win at State Farm Center came on Dec. 21 against Tennessee-Martin.

Iowa used early runs of 12-3 and 15-5 to push to lead to 20 before finishing the first half with a 40-22 advantage. The lead swelled to 35 points with 10 minutes left in the second half as Iowa’s crisp ball movement to dissect the Illinois defense.

The Hawkeyes recorded assists on 20 of 27 made baskets, led by their Swiss Army knife Samantha Logic.

Logic leads the team on the season in points, rebounds, assists and steals and put together another all-around performance Sunday. The junior put up 12 points, seven rebounds and five assists to go with three steals. Theairra Taylor led Iowa with 17 points.

Early on, Iowa tried to shoot Illinois out of its trapping zone defense, but it was shots inside the arc that hurt the Illini. In the first half, the Hawkeyes were 9-for-10 from two-point range, while they were 5-for-15 from beyond the line for a 56 percent clip overall.

Sunday was the final home game for the team’s lone senior Amber Moore, and she recorded 14 points. Moore finishes as the Illini career all-time leader in 3-pointers with 291 makes. Moore checked out with 51.8 seconds to a standing ovation.

Offensive struggles continued for Illinois. The Illini hold an 8-2 record this season when topping 70 points but haven’t hit that mark since Jan. 15 against Northwestern. The team shot 37.5 percent from the field and 19 turnovers hindered Illinois’ offensive productivity. The Illini normally dominate the turnover margin, leading the conference with a plus-5.5 margin coming into the game, but were minus six in the turnover battle Sunday.

Jacqui Grant made her return for the Illini after sitting out the past six games with mononucleosis. Grant finished with seven points and one rebound in 20 minutes.

“Obviously, she didn’t look physically back,” Bollant said. “It’s tough being out for three weeks, so hopefully today will help her for Thursday. Mono is a tough thing to come back from.”

One bright spot for the Illini was Ivory Crawford, who broke the 1,000-point barrier on a layup with 3:41 remaining. Crawford is the 27th player to achieve the feat and the 15th to do so in three seasons.