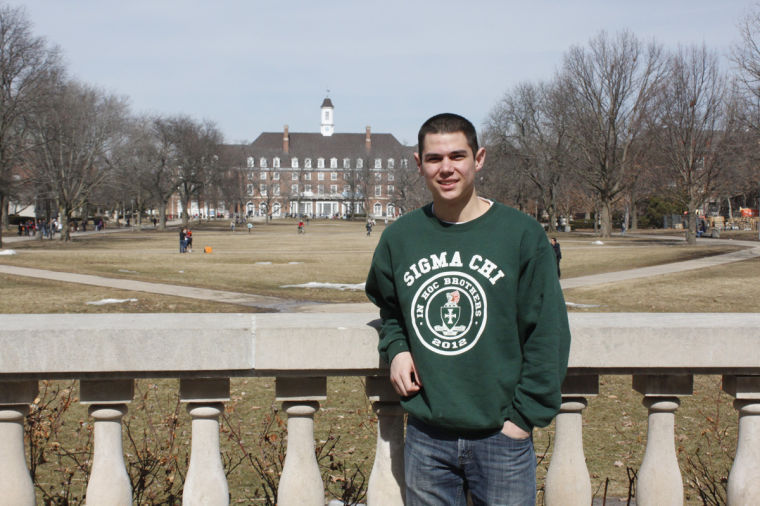 Portrait of Steven Hollon on the Quad

The day before heading back to begin his final year at the University, Steven Hollon, senior in Business, stopped in to see his doctor for a regular checkup. After a routine physical, Hollon’s doctor shared with him that something may not be right with his health, and the first round of tests was administered. After driving down to Champaign to begin the fall semester, Hollon had to turn around and return home for a second round of testing.

After Hollon returned to the University, he went straight to a community where he knew he could get support: his fraternity, Sigma Chi.

“They were so encouraging, supportive and helpful,” Hollon said.

Hollon, the philanthropy chair of the University’s chapter of Sigma Chi, soon had to not only balance schoolwork and the demands of being a college student, but he also had to endure multiple rounds of chemotherapy as a part of his treatment plan during the fall 2013 semester.

Since then, he has seen his health improve and continues to have regular checkups with his doctors.

“(Second semester’s) been kind of tough because I have to do monthly checkups and testing every month to make sure everything’s going right and to make sure the cancer hasn’t come back,” Hollon said. “But I’ve been able to balance it pretty well this semester.”

This positive progress is something Hollon said he thhinks his friends, family and specifically his fraternity brothers have helped propel. Kevin Campbell, fellow Sigma Chi brother and senior in Business, said he kept in touch with Hollon by texting him and getting updates on his diagnosis.

“We went up to see him a few times, talked to him, just to see how he was doing,” Campbell said. “(Hollon) came down here to visit. … It gave him a sense of normality.”

Support from the Greek chapter has come in other forms as well. For example, fundraisers for Hollon’s treatment were set up by his fraternity brothers at on-campus bars such as KAM’S, Joe’s and the Clybourne.

“My girlfriend and one of the brothers in the house set up bracelets (as a fundraiser) and sold those around campus for me,” Hollon said.

Additionally, the funds from Sigma Chi’s fall philanthropy event, Derby Days, went toward supporting Hollon in his battle with cancer. The event involves “teams” from many sororities on campus and features a week of different events and competitions.

“The biggest thing was running Derby Days for me,” Hollon said. “I had no idea. They kind of surprised me with that.”

Beyond the support of his fraternity brothers, Hollon spoke highly of the entire Greek community and their outward support and kindness toward him.

“I was in awe of how the Greek community came together. … It was really cool to see.”

Throughout this journey, Hollon’s friends have said he has continued to be confident, adaptable and motivated throughout the past few months.

Staying positive seems to not only be something Hollon embodies, but also a way of life he recommends in regards to any situation.

“See the positive in every situation you’re in. Being a college student, we get super stressed from (your) girlfriend/boyfriend issues, school (and) trying to find a job. … See the positive about the situation and keep your head up, see the benefits,” he said.

Hollon said that the support of the community has made the entire process easier.

“Yeah, I’m going through a terrible thing, but (I) try to see the positive side of it,” he said. “I saw who my real friends were. I saw how close not just my house is, but the entire Greek community is, and that made it a lot easier to go through.”