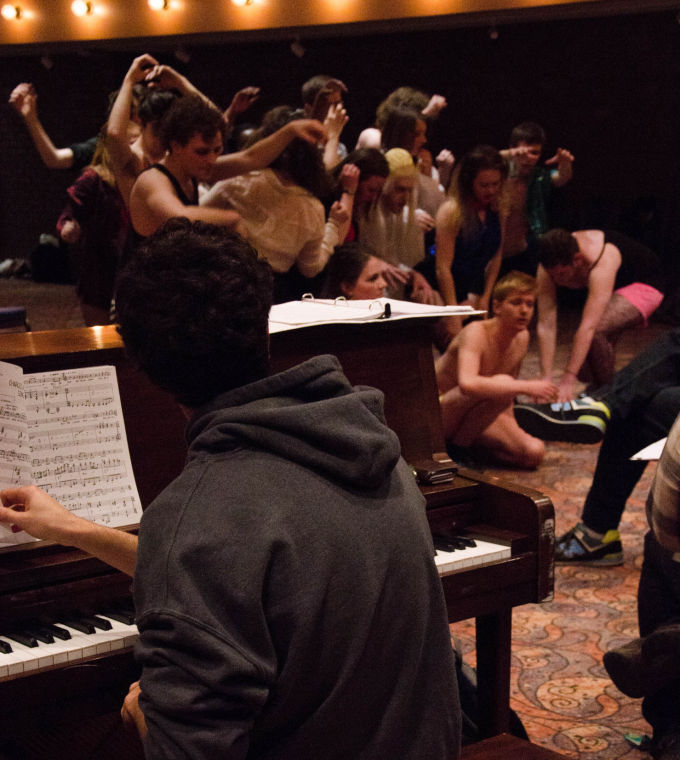 The cast of Illini Student Musicals goes through a costume rehearsal of their latest production, The Rocky Horror Show. The group, which is entirely student run and funded, will be performing the cult classic this Friday, March 14th at the Canopy Club.

After Friday at the Canopy Club, the remains of toilet paper squares, confetti pieces and playing cards may litter the ground. This will not be the doing of sloppy patrons, but of audience members participating in “The Rocky Horror Show.”

“The Rocky Horror Show,” presented by Illini Student Musicals, will be performed at the Canopy Club on Friday at 7:30 p.m. and midnight. Tickets are available in advance online for $11, and information to purchase them can be found on the Canopy Club’s website.

Christopher Cayari, director of the show and graduate student in music education, said that while there are two adaptations of “The Rocky Horror Show,” this cast, which is comprised of 23 people, will not perform a “shadow show” (in which the movie version of “The Rocky Horror Picture Show,” plays in the background while the actors act out the same scene on the stage). Instead, the Illini Student Musicals’ production will be a live show without the movie playing behind the actors.

Cayari said because the cast will not be performing a shadow show, they do not have to do the exact actions that the actors perform in the 1975 film.

“Our actors are given a little more freedom to develop their own version of the characters,” Cayari said.

During many showings of “The Rocky Horror Show,” audiences are encouraged to participate during the performance. For example, when some characters’ names are said during the show, the audience may respond by yelling another word. Audience members are also traditionally asked to bring certain props, including rice and newspapers, to use at the direction of the cast during certain scenes.

However, outside props will not be allowed during Friday’s performance, said Matt Bleck, co-producer of the show and junior in Engineering. Instead, a prop bag will be available for purchase at the show for $6. The bag will include gloves, playing cards, confetti and toilet paper, among other things. However, he does not think classic props like rice and squirt guns will be included.

“If they don’t follow the house rules then they can be removed from the venue,” Bleck said. “It’s just kind of a safety and security thing. We don’t want anyone getting hurt, and we also don’t want to ruin the facility.”

Bleck said pamphlets explaining how audience members can participate will be included and the information will also be projected on screens during the shows.

Jon Faw, freshman in LAS, will be playing a phantom on Friday. Faw said he fell in love with the movie version of “Rocky Horror” as a freshman in high school and that those who attend can expect to feel “shock and awe.”

“(If) they haven’t seen the show, they’re in for a big surprise in terms of sexual explicit nature (and) comedy,” he said. “And the audience participation is really an enjoyable experience that they’re going to get to be a part of.”

Cayari said that the live orchestra, or “pit band,” will also perform between the two performances.

“It should be a fun night,” Cayari said. “It’s not just the show. If you want, you can stay, you can dance to the band and that type of thing.”

“It was really cool to watch the cast come together … and create this piece of artwork known as live theater,” Cayari said,

More information can be found on the Illini Student Musicals’ website.