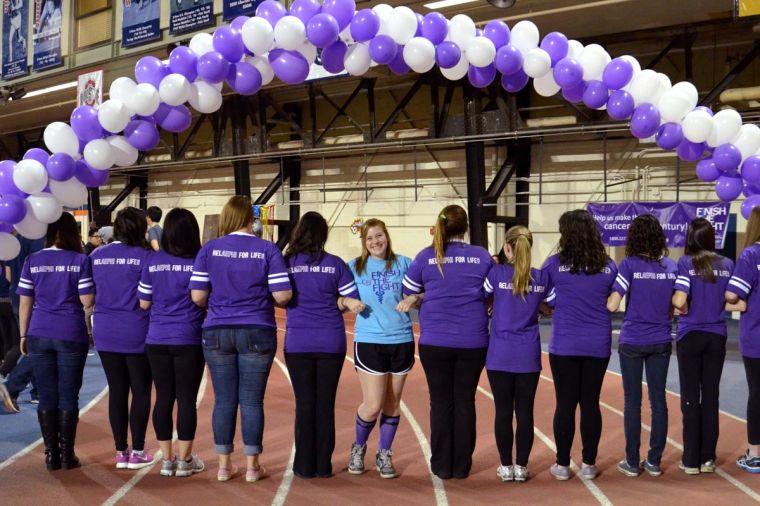 Because “cancer never sleeps,” neither did several students who stayed up until the wee hours of Sunday morning, walking around the Armory’s indoor track during Relay For Life. Students representing several campus groups raised proceeds through the fundraiser for the American Cancer Society.

Melissa Feiger, Alpha Epsilon Phi member and junior in Education, served as a Relay for Life co-chair. Her position stemmed from being a vice president for Colleges Against Cancer, the registered student organization that plans the event. She has also served on Colleges Against Cancer’s leadership team since her freshman year.

Her involvement with Relay didn’t start at the University, though. As the granddaughter of a cancer survivor, Feiger said she started participating in Relay for Life during her freshman year of high school and never stopped.

“I loved the sense of community and the cause that it was going toward,” Feiger said.

Thanks to her involvement in her sorority, Feiger said she has been able to spread her enthusiasm to her sisters and expand awareness of the event to the Greek community.

“It’s important to people in our house,” Feiger said, noting that the sorority had multiple teams participating in this year’s event.

With about 50 of her sisters participating in the event, Feiger said she believes participation has increased — both with the number of participants and the amount of fundraising.

Sarah Shulman, Alpha Epsilon Phi member and senior in FAA, said she has worked with Feiger for three years in Colleges Against Cancer, serving as the leadership team’s development chair.

“She works very, very hard,” Shulman said. “Everyone she works with she can really encourage. She leads by example, and if she wants all of us to do something, she will do it.”

Shulman attributes Feiger’s success as a leader to her personable attitude and how she “cares so much about the cause.”

“It makes us all want to do the same,” she said.

Liz Arenson, survivorship/Luminaria chair for Colleges Against Cancer and junior in Education, agrees.

In an email, Arenson wrote that Feiger has made her experiences with Colleges Against Cancer and Relay for Life enjoyable because Feiger allows her freedom but also direction in the survivorship/Luminaria committee.

Both Shulman and Arenson specifically pointed out that Feiger does not act like she is above everyone else, despite her position. Shulman also said that Feiger faced a few obstacles this year, such as the timing of the event. Illini Dance Marathon, and several college open houses also took place on the same weekend. Additionally, Relay for Life was held about a month earlier than it had been in the past. However, Feiger said she let nothing stand in her way while trying to make a successful event.

“We really made it work, and I would attribute a lot of that to Melissa and her willingness to not back down,” Shulman said.

Even with the numerous campus events going on last weekend, this year’s Relay for Life drew more than 140 teams and more than 1,150 participants. Feiger personally raised $5,415, the second highest amount at this year’s Relay for Life. As of Monday night, $144,630.44 was raised, with the funds still being counted. They are accepting donations until August, so Feiger said she anticipates the organization will meet their $145,000 goal.

Part of the proceeds were raised through the selling of Luminaria bags for the event’s annual Luminaria Ceremony, which happened Saturday night. During the ceremony, the RSO showed a slideshow of pictures of people who have passed away from cancer, as well as a video of a Luminaria Ceremony the RSO held at Memorial Stadium on Feb. 18.

In the video, bags were illuminated and configured to spell “HOPE.” They were then rearranged to spell out the word “CURE.”

The Luminaria Ceremony was held on Feb. 18 to save space in the Armory and to hold the ceremony on a larger scale.

“That’s just one idea that I really wanted to incorporate,” Feiger said.

Feiger said she is excited to continue progress with next year’s Relay for Life, even as she begins full-time student teaching.

“The feeling is indescribable: planning for such an event like (Relay),” she said.

Emma can be reached at [email protected]