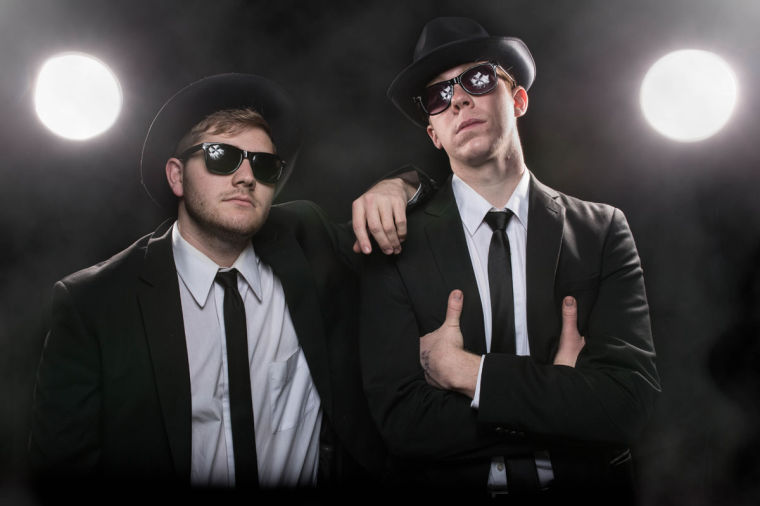 For every Big Ten home basketball game this season, Brian Tucker and Nate Leonardi have stepped onto the court of State Farm Center to perform — while wearing suits and ties.

Tucker, senior in Engineering, and Leonardi, junior in AHS, are members of the University’s Basketball Band. Leonardi, who plays trombone, and Tucker, who plays saxophone, have been performing at men’s Big Ten basketball home games since the beginning of the 2013-14 season.

After playing the “Three-in-One” during halftime, the pair have about five minutes to transform from orange polo-wearing band members to the black-suit-and-sunglasses-wearing Jake and Elwood Blues — the famous, fictional “Blues Brothers” duo.

This basketball season, Leonardi danced as Jake Blues, the shorter Blues Brother, and Tucker as the tall and lanky Elwood Blues at center court.

While both claim to be terrible dancers outside of the Blues Brothers skit, the two choreographed the entire routine themselves. In fact, band director Barry Houser and the rest of the band did not even see the routine until its first live performance at the basketball game against Iowa at State Farm Center on Feb. 1.

The 45-second routine consists of a mixture of swing dancing, cartwheels and energetic slides across the court. Much to the enjoyment of the crowd, the dance culminates in a dunk by Tucker, who uses Leonardi’s back as a springboard.

Tucker has only missed the dunk once, according to the duo. Leonardi said this was partially because the referee was standing where he usually kneels on the ground for Tucker to spring off of.

Before the first performance, Leonardi and Tucker practiced the routine on the basketball court at the ARC. Dressed up in black suits and dancing to the rhythm of a metronome, they initially stuck out among the students in T-shirts and shorts playing pickup basketball games. As the basketball season went on, Leonardi said, the number of confused onlookers decreased and students began recognizing them.

“Now people know us; sometimes they even say ‘good job’,” he said. “I’m sure there are much weirder things that happen at the ARC.”

The duo, who are good friends and members in the student-run brass band called Sixth Street Brass, have been key players in bringing back the tradition of the Blues Brothers routine at University basketball games, which went on during the ’90s for a few years but then fizzled out, according to former band director Gary Smith.

Smith, who directed the band from 1976 to 1998, said the idea for the routine came about at band practice one day when the band was brainstorming ideas on how to keep the crowd entertained during the breaks of basketball games.

No matter how the basketball team was doing in the game, the Blues Brothers routine in the ’90s would always get the crowd riled up, Smith said.

“I had two kids in the band that looked just like the Blues Brothers,” he said. “When they came out, the crowd just erupted, because they looked so authentic.”

After the original Blues Brothers portrayers graduated, Smith said he and the band had trouble continuing the tradition because they could not find two guys who looked as authentic and could evoke the same crowd reaction.

On March 1, 2013, which was Unofficial St. Patrick’s Day, current band director Barry Houser posted on the band Facebook page wondering if any band members would be interested in resurrecting the Blues Brothers tradition at home games. Specifically, he asked if they would be willing to do it at the game the next day versus the University of Nebraska.

Within five minutes, Tucker and Leonardi both commented that they were interested. Ben Wooley, junior in Engineering, who is Tucker’s prospective successor as Elwood, commented third.

Leonardi and Tucker woke up early the morning after Unofficial to create a routine and were ready to perform it for the March 2 game against Nebraska. However, they ended up not being able to perform because the band did not yet have the copyright for “I Can’t Turn You Loose” from the “The Blues Brothers” film.

Therefore, this season was the first time the tradition has been back at the University since the ’90s.

“We have a common goal and it’s fun,” Leonardi said.

Leonardi and Tucker perform their routine during the first commercial break of the second half of the game.

“You can’t get up there and be nervous. It’s a once-in-a-lifetime thing,” Leonardi said. “Who else can say they’ve been on a Big Ten basketball court and danced as a Blues Brother?” he said.

Wooley, who hopes to fill Tucker’s shoes to the best of his ability next year, said he is excited for the opportunity and that he can quote “The Blues Brothers” movie probably too well.

“A lot of people from this university are from the Chicago area, and as ‘The Blues Brothers’ film is very centric in that location, I think there’s something special about it,” he said. “It’s a little slice of home.”