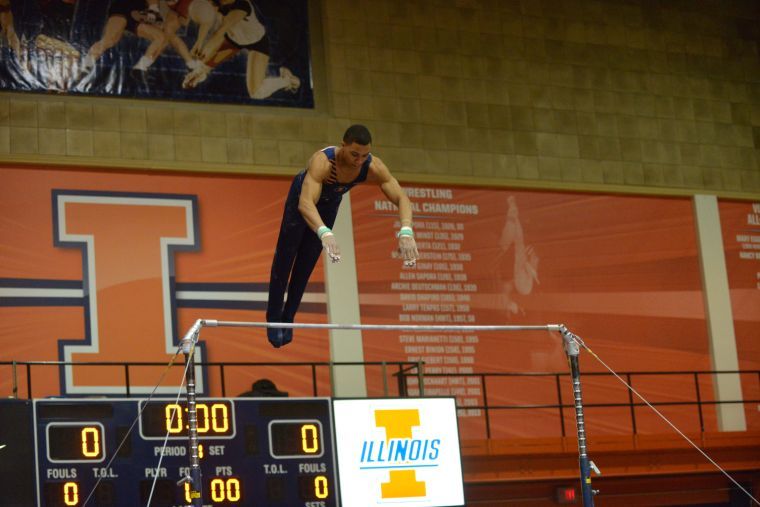 Despite lofty preseason expectations, the No. 6 Illini were unable to put it together as a team, falling to No. 1 Michigan, No. 4 Ohio State, and No. 8 Penn State.

Even though the team didn’t finish where it had hoped, many individuals had strong performances. The meet was highlighted by freshman Chandler Eggleston, who captured the Big Ten floor title, as well as sophomore C.J. Maestas, junior Jordan Valdez and senior Chad Mason.

“This was a great finish to a good weekend,” head coach Justin Spring said in a press release.

Eggleston posted a career high of 15.725 on floor to notch his sixth title of the season and first career Big Ten title.  His score was almost 0.4 of a point ahead of the next best competitor.

“Chandler finished a great floor routine with a huge stick … for a huge win,” Spring said. “It’s incredible for a freshman to rise to the occasion.”

This marks the third year in a row that an Illini freshman has brought home a Big Ten title, with Fred Hartville winning on vault in 2013, and Maestas in the all-around in 2012.

“It’s exciting to go out there and win as a freshman,” said Eggleston.  “It’s all that I’ve worked for this year and I’ll take this and use the momentum to go into NCAAs confident.”

Maestas also had a strong weekend, finishing second on still rings with a 15.625, and fourth in the all-around competition.

The four Illini who were sent to the podium hope to help the team improve its all-around score in two weeks in a bid for an NCAA tournament title.

The Illini, who will have their last chance to prove they can be the best team in the country, will have the next two weeks to prepare for the NCAA tournament.