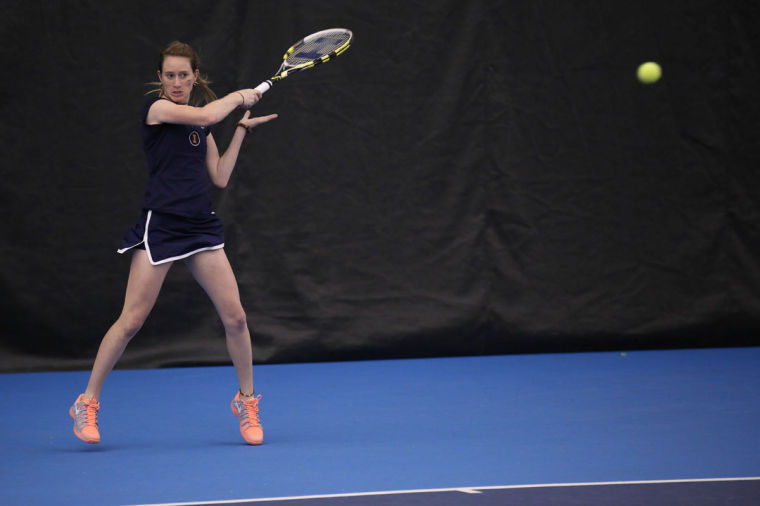 Illinois' Allison Falkin attempts to return the ball during the meet against Nebraska, at Atkins Tennis Center, on Sunday. The Illini won 4-2.

This past weekend was a tale of two matches for freshman Jerricka Boone and the Illinois women’s tennis team. Boone was the last Illini to finish in both matches over the weekend. Saturday, she came within two games of completing an Illini comeback against Iowa but fell short. Sunday, with the potential to clinch the Senior Day match against Nebraska, she delivered.

“I’m so happy for Jerricka to get over that hump,” Illinois head coach Michelle Dasso said. “Today to get it done and clinch it, it’s about growth and getting better. I think it’ll help relax her.”

Saturday’s match highlighted the importance of the doubles point to the Illini. Dasso tweaked her pairings once again, but Iowa took the first two sets to gain a 1-0 advantage, which proved to be the difference maker.

The Hawkeyes increased their lead to 3-0 after Ruth Seaborne and Morven McCulloch defeated Allison Falkin and Melissa Kopinski. Misia Kedzierski started the Illini comeback with a dominant 6-0, 6-1 win over Ellen Silver. Shortly after, Louise Kwong and Alexis Casati continued their excellent freshman seasons, winning their respective matches to even the score at 3-3, but Boone dropped a hard-fought match to Annette Donahics.

After the match, the Illini held a team meeting to regroup and focus for the rest of the season.

“We all had a fresh mind-set after we met,” Kedzierski said. “I think we all came out here pretty positive after that loss.”

On Sunday, Illinois honored seniors Falkin and Kedzierski before the match against Nebraska (8-14, 0-9). Using a different format, with the teams played singles first, leaving doubles until the end as a potential tiebreaker.

This time it was the Illini jumping out to a 3-0 lead as Kedzierski, Falkin and Kopinski all won their respective matches. Kwong lost her match, and Casati ran out of gas against Izabella Zgierska, falling in three sets, leaving Boone the last to finish her singles match for the third time in four matches.

After taking the first set from Hannah Suiz 6-4, Boone dropped the second 3-6 to set up a third set to determine whether or not doubles would be played. With her teammates flashing their “Left Elbow” pose, staring at the service line and pointing their left elbows at the opponent, Boone finshed off Suiz 6-3, clinching the 4-2 win for her team. Boone’s win made doubles, continually a major factor in Illinois’ matches this spring, unnecessary.

“Ric (Mortera), the assistant coach, kept telling me that it if I lost, we still had doubles, so I felt less pressure,” Boone said. “Plus, Alexis was still out there grinding, so it made me feel better because I honestly don’t like being alone.”

Sunday marked the final time Falkin and Kedzierski would compete at Atkins Tennis Center. Falkin’s mother came to watch her play, and Kedzierski’s parents and dogs were also on hand for the event.

“I’m happy that my mom got to be here,” said Falkin, a native of Georgia. “It makes it a little more special because, other than Thanksgiving break, I don’t get to go home.”

Although Illinois celebrated Senior Day on Sunday, the Illini have two regular season matches left before the Big Ten tournament begins April 24. Illinois entered the weekend eighth in the conference.

“I’m trying to act like it’s the same just because we have at least three matches left,” Falkin said. “I don’t want to get too overwhelmed.”

Thomas can be reached at [email protected]