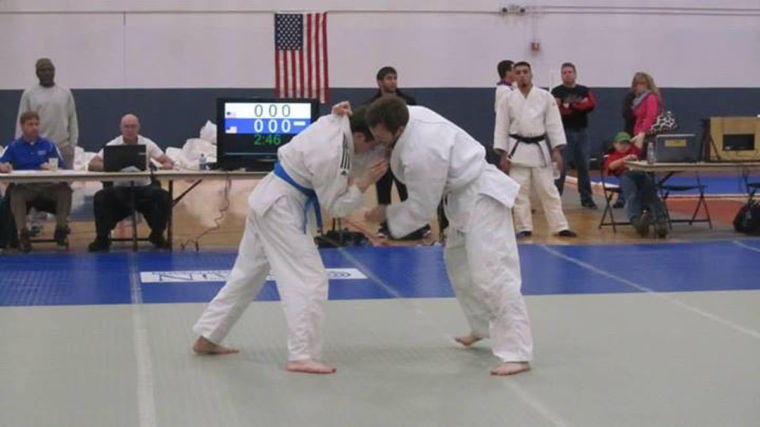 University student Michael Neal, left, competes in the Midwest Collegiate Championships on Feb. 22. Fifteen teams competed in the event, which was the first the Illini Judo Club hosted.

Prior to each practice, head trainer Jonathan Chu of the Illini Judo Club instructs his fellow judokas to thoroughly clean the practice area at the ARC Combat Room. Following the cleaning of the practice mats, the judokas bow before engaging in any combat with their fellow teammates.

The cleaning and subsequent bow represents the value judokas place on judo’s core concept of mutual welfare and benefit. That is, respect for the instructor, teammates and the dojo — the place where judo is practiced.

“The whole idea of judo is that you may be a competitor, but you’re not trying to hurt someone else,” said Ben Bamberger, a graduate student at the University. “You always want to respect them, so you bow before practice, any demonstrations and competitions.”

In addition to instilling the value of mutual respect in participants, the Illini Judo Club teaches judokas the skills and attributes needed to succeed in the sport. Through an emphasis on the mastery of the physical and mental skills inherent to the practice of judo, the club seeks to provide an opportunity for the campus and local community to learn the art of judo.

“The mission statement for us is just to grow the sport of judo,” Chu said. “Students are here for an education, but also if we can show them the aspects of judo, that would be something great.”

Possibly the most demanding aspect of judo is the required mental fortitude, which the club hopes to teach its participants. The intensity inherent in judo asks for a great deal of mental toughness and focus.

“You have to stay focused and be aware of what your opponent is doing all the time,” junior judoka Ary Zhang said.

Zhang also emphasized the importance of the mental aspect of judo in allowing judokas to properly execute their throws.

Chu described judo as a “chess match” in outlining the significance of the mental aspects of the sport. Effective strategy in a match is crucial in allowing physically smaller judokas to match up well against and beat their opponents, he said. The ability to strategize well is a result of a strong mental attitude and toughness.

In its most basic form, judo is a martial art that focuses on throws with the intention of putting one’s opponent on the floor. Judo is based on using one’s leverage to upset their opponent’s balance, forcing them to the ground and ultimately pinning them.

“You want to make sure your opponent is off balance, so it makes it a lot easier to throw them,” Bamberger explained. “Then you want to get your body into position to properly execute the throw.”

At a recent practice, Bamberger and Zhang demonstrated a variety of the different throws employed in judo. They first demonstrated the epitome of judo throws known as “uchi mata” or the inner thigh throw.

To execute the throw, Zhang uses his leverage against Bamberger’s inner thigh to knock him off balance and get him in the air. Zhang proceeds to again use his leverage within Bamberger’s shoulders to spin him and ensure he lands on his back. Leverage, as opposed to pure strength, is what allows judokas to throw a heavier and larger opponent.

The key aspects that allow Zhang to throw Bamberger to the ground are the strength of Zhang’s grip and his ability to quickly grab hold of Bamberger. Grace Talusan, a resident of Mahomet who trains with the club, described the method, saying “the key is to get in as fast as you can; attack, grip and go is what the thought is.”

Bamberger stressed the importance in having a high and dominant grip, which gives judokas a clear advantage over their opponents.

Also key to the judo throw is energy conservation, which relates to the principle of maximum efficiency and minimum effort. The principle allows judokas to conserve their energy throughout a match and, thus, have more energy for bigger throws later in a match.

The ability to master throws is in large part a result of the physical training the club emphasizes for all its members. Chu said it is crucial in judo to have a high level of endurance, as well as core strength.

“You need to have a lot of stamina to have that explosive action and have those core muscles because you are using your whole core movement and body,” he said.

Members of the club, Bamberger and Zhang especially, do a great deal of physical training outside of the biweekly judo practices. Zhang puts an emphasis on cardio workouts, such as running and kickboxing. Like his teammate, Bamberger also puts a premium on having a strong cardiovascular system. Along with working on cardio, he does a lot of bodyweight exercises, such as pull-ups, sit-ups and pistol squats.

In his three years as head trainer, Chu has observed a tremendous amount of change in the club.

He said there is a steady emergence of “natural born leaders” who have grown into leadership roles in the club. Chu has seen greater participation in the club throughout his tenure. There were only about five members when he took over three years ago, and today between 15 and 30 people participate in practices.

The growth of the club under Chu became apparent in February when the Illini Judo Club hosted the Midwest Collegiate Championships at the ARC. Fifteen schools attended the competition, including fellow Big Ten teams Indiana and Purdue. The event was a huge success for Illinois. It was the first time hosting any judo tournament, as the club finished first place overall.

Going forward, Chu hopes to see further emergence of advanced members in the club and a larger number of black belts. He sees this as an affirmation of the value the club places on teaching leadership for its members.

Chu’s hope is to continue giving back what he has gained from the sport to the club’s participants — an embodiment of the principle of mutual welfare and benefit.

“Everyone has different reasons why they want to join judo; it might be they want to get in better shape or they want to defend themselves,” he said. “For me, I just want people to have fun and pass what I’ve learned onto others.”

Dan can be reached at [email protected]