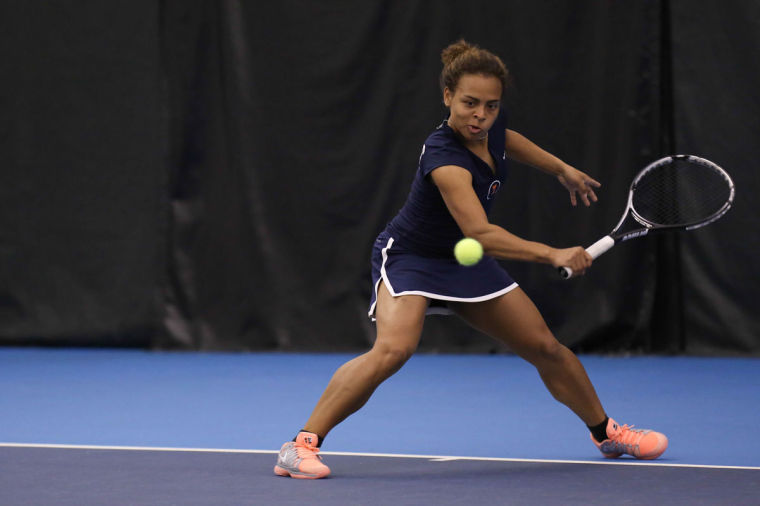 Illinois' Jerricka Boone attempts to return the ball during the meet against Nebraska, at Atkins Tennis Center, on April 13, 2014. The Illini won 4-2.

The Illinois women’s tennis team came into the Big Ten tournament feeling pressured to win at least two matches and keep their NCAA hopes alive. After breezing past Nebraska in the first round, the Illini failed to meet their goal, falling 4-2 to Purdue in the quarterfinals on Friday.

In singles, Kopinski defeated Hanna, Boone took down Andersson and Casati beat Zgierska, all in straight sets. Falkin and Kedzierski also had leads in their respective matches when Casati finished off Zgeirska to end the match. The win was the fourth straight for Illinois as Nebraska finished the season with its thirteenth straight loss.

After Thursday’s matches was the Big Ten Tournament Banquet, at which season awards were presented. Falkin was named to the All-Big Ten team for the third time in her career, marking the fourteenth consecutive year at least one Illini had been so honored. Kwong received Illinois’ sportsmanship award.

In Friday’s quarterfinal match, the Illini attempted to avenge their regular season loss to Purdue, and got off to a good start, taking a 2-0 lead.

“We were feeling really good coming into the match,” Kopinski said. “We’d been practicing hard all week, and Nebraska was a great match.”

The Boilermakers would fight back, as Escribens, Kapitany, Andjela Djokovic and Mara Schmidt combined to win four straight matches, giving their team a 4-2 win and ending Illinois’ tournament run.

“It was a tough match,” Dasso said. “We played excellent in doubles. I think our girls competed very well and gave everything they could, but we just fell short. Maybe the matchups didn’t favor us.”

At No. 37, Illinois entered the tournament ranked higher nationally than No. 41 Purdue. The loss was the first the Illini had suffered all year when winning the doubles point. Purdue advanced to the semifinals to face top-seeded Michigan.

Michigan would go on to fall 4-3 in a tightly-contested championship match to the No.2 seed, Northwestern, which defeated No. 3 Ohio State in the semifinals. The loss snapped Michigan’s thirteen-match win streak.

Now the waiting game begins for Illinois. The NCAA will reveal the 64-team tournament field Tuesday at 4:30 pm, and the Illini will be waiting.

“We can obviously hope for the best,” Casati said. “We don’t want to get our hopes up too much.”

Thomas can be reached at [email protected] and @donley_thomas.