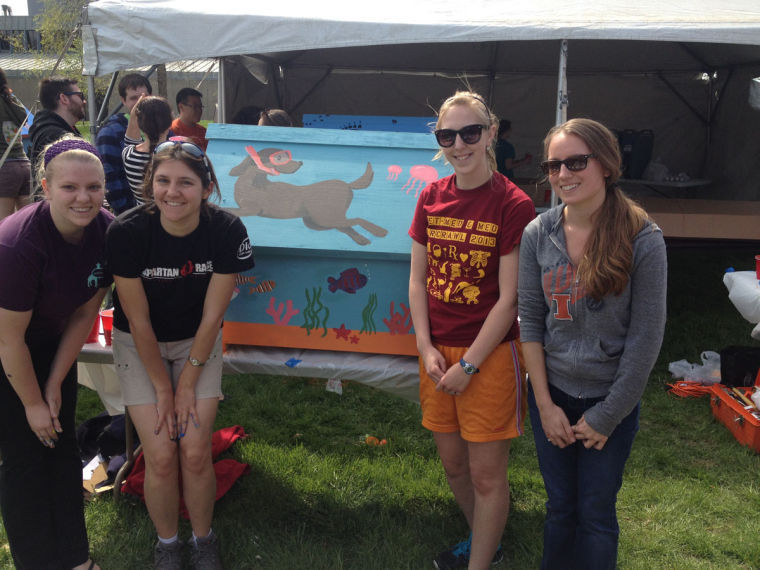 Seven teams, each representing a club from the College of Veterinary Medicine, competed in the Nestle Purina Dog House Building Competition on Saturday afternoon.

A golden retriever named Ruby roamed below the tables of the University’s Large Animal Clinic courtyard on Saturday afternoon, greeting competitors and looking for a pat on her head. Above her, seven doghouses were assembled and painted within three hours — seven new homes for dogs much like Ruby herself.

Seven teams, each representing a club from the College of Veterinary Medicine, competed and had approximately three hours to build and paint doghouses. The Veterinary Student Outreach Program group, the winners of the competition, received $125 for their club.

Brittany Farron and Sarah Netherton, graduate students in Veterinary Medicine, helped cut out fish stencils from cardboard boxes. They represented the aquatics division of the Non-Traditional Species Club, an RSO on campus that exposes students to exotic animals. They said their design strategy was to paint a water scene on their doghouse.

When the Veterinary Student Outreach Program was asked about their strategy, they imitated Tim Gunn’s famous line, “Make it work.”

The outreach program is an RSO that speaks to the community at places such as libraries and 4-H clubs about the veterinary profession and animal welfare.

White and her teammates laughed together as they constructed their doghouse. Ashley Barthel, graduate student in Veterinary Medicine, said they were having fun while working for “a good cause.”

Another competitor, the Shelter Medicine Club, painted their doghouse orange and blue and decorated it with dog silhouettes.

“It’s great to be involved in the doghouse building because it goes to the shelter,” said Ellen Glenn, graduate student in Veterinary Medicine.

Their club focuses mainly on local animal shelters, according to Glenn. They provide low-cost or free sterilization for clinics that don’t have access to the procedure.

“That’s our main focus, but we like to do anything that’s supportive of animals in the community,” Glenn said.

According to Glenn, the club went to Rantoul this weekend to work with feral cats at a clinic in a mobile home community.

The Diagnostic Imaging Club went against the trend of painting the doghouses orange and blue at the competition. Their doghouse was completely black, and they said they were going to do stencils of X-ray-style dog skulls on the house.

Danielle Swanson, graduate student in Veterinary Medicine, and Daniel Rahe, 2009 Veterinary Medicine alumnus, worked on the doghouse for the club. Rahe said helping at the competition was a way of showing school spirit and “being a part of vet school.”

Rahe and Swanson are engaged and plan to get married in a couple of months. They said helping build the houses was a way to help their community.

“We live local and hope to stay local,” he said.

The majority of the doghouses will be donated to local shelters. A few houses will be raffled off at the College of Veterinary Medicine open house on October 6, where “tons of families come from all over the state” to visit, Babler said.

Another couple of houses will be sold at a silent auction at a fall conference for alumni. Money raised at the conference will go toward funding a student veterinary scholarship. Babler said that while the focus is helping local shelters, the planning committee for the event also wanted to help University veterinary students, too.

This is the first time the doghouse-building competition has happened at the University. The chance that it will happen again “all depends on how much we raise,” he said.

According to Babler, Purina has a good relationship with the community in St. Louis, and that is why they were willing to help Champaign-Urbana shelters.

“This is a lot of money they put into this,” he said.

Babler asked Dr. Danielle Merema, visiting clinical instructor in Veterinary Medicine, to be one of the judges for the competition. Merema said she was looking for creativity, school spirit, bright colors and overall artistic ability in a winner.

The competitors mixed paint with plastic cutlery in Red Solo cups to paint the houses. Half of the teams worked under a large blue and white tent, while others painted in the sun at the courtyard next to the Veterinary Teaching Hospital’s Large Animal Clinic on campus.

All of the teams constructed their doghouses within 30 minutes of the competition beginning; the painting took the majority of the time.

Halfway through the competition, a butterfly fluttered through the crowd of busy veterinary students still painting their doghouses. Ruby lay in the shade and watched on, chewing on a stick.