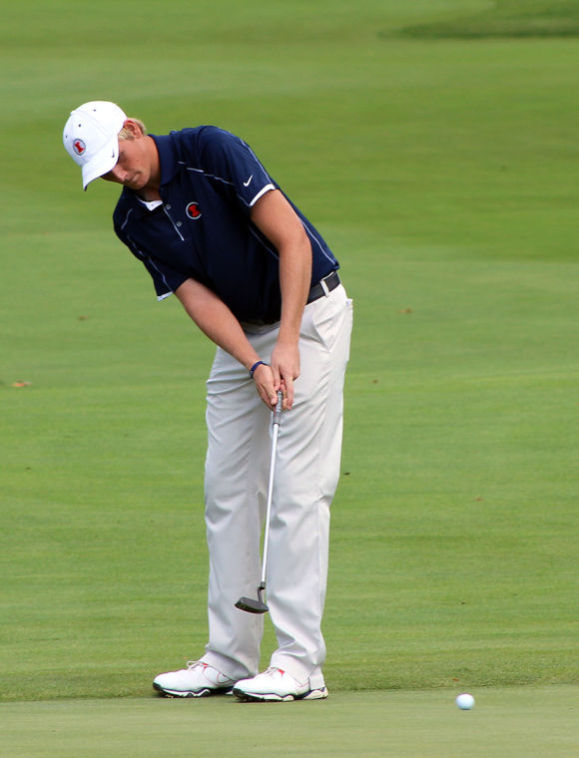 For Charlie Danielson, one of the best collegiate golfers in America, the game is not a game, at least not fun and games. Oh, there are moments of exhilaration — shooting a career-low score to finish as an honorable mention All-American at the NCAA Championships as a freshman. Most times, though, golf for the Illinois sophomore is just picking up the lunch box and going to work, a blue-collar slog — animated by blind determination, unrelenting perfectionism and obsessive attention to the tiny details that can eventually add up to excellence.

Today is one of those days. Charlie only has two tasks to accomplish at golf practice this afternoon: hit seven of 10 drives onto the fairway and finish a five-hole chipping and putting course in nine shots or fewer. It’s 2:15 p.m. Technically, practice lasts until 4, but he has no time limit. If he accomplishes both of his goals assigned by coach Mike Small in five minutes, he can go home. But if it takes until midnight, Small says, then it takes until midnight. Ideally, Charlie would hit 15 shots, make each and go home. He knows that won’t happen.

Charlie started golf at age 2. When most kids were learning to walk, the young blonde boy from Osceola, Wisc., was handed a set of tiny golf clubs and some Wiffle balls as a game – a game that would eventually come to define his identity, work ethic and ambition. He eventually learned that golf is part physical gifts, part mental and emotional concentration, and, at least for him, a huge part plain, old-fashioned hard work.

“You’ve got to spend time practicing,” he says.

Today, Charlie starts the driving part of practice first. At the Demirjian Indoor Golf Practice Facility, he hits out from a driving garage onto an open field, his wispy blonde hair blowing back in a good wind. At 6-foot-5, Charlie is by far the tallest Illinois men’s golfer. His length allows him to hit the ball farther than his shorter teammates, but it also makes his swing more fickle and harder to recreate shot after shot.

Charlie’s first drive goes wide left of the “fairway” – a stretch of field between two lines of trash barrels. On the next shot, Charlie overcorrects and goes wide right, toward the University’s cattle farm in the distance. Charlie knows he could easily hit seven balls on the fairway to get done with the drill if he took a little power off his swing, but he wouldn’t do that on a real golf course, so he’s not going to do it in practice. He does the same routine every shot.

Finally, his third ball falls in the middle of the fairway.

“Each shot is its own shot.”

It takes Charlie about 30 swings to go seven-for-10 — more than he would like and more than his teammates, all of whom have finished driving ahead of him. Now he can join them on the short game practice course inside Demirjian. At the putting, chipping and pitching green, each player must chip and putt a ball into five different holes in nine or fewer strokes. Par is 10 strokes. Each player must make one chip shot.

The weakest part of Charlie’s game is his short game — chipping and putting. Like other tall golfers, he is unable to control his arms as well as shorter players, and arms are all that are used in the short game. The difference between a make and a miss can be a fraction of an inch on the club. Charlie puts a different club at each hole — a 58 degree wedge, a 54 degree wedge, a 50-degree wedge, a pitching wedge and a sand wedge — because each shot varies in distance and lie.

He starts off trying to chip the ball to a hole about 30 yards away. He misses but is able to recover and sink the putt. He moves to the second station — a little bit closer to its hole — but he doesn’t sink the chip. He misses the first putt and makes the second. He needs to sink chips on each of the next two holes to total 9 shots. He fails and starts the task over. When each player is ready to hit their last shot, they request a witness to prove they followed the rules.

“Make,” teammate Jonathan Hauter calls out from the green. His teammates turn their attention toward him. He makes his putt it and picks up his clubs.

Charlie goes around and around for 40 minutes. At 3:40, he still hasn’t made a chip shot, not even on his failed rounds. He hasn’t even been able to finish even-par. If Charlie could’ve taken a single stroke off each round at the NCAA championships last year, he would’ve been second in the country rather than 13th. If he could’ve taken a single stroke off just one of the rounds, he could’ve been Second Team All-America, not just honorable mention. In a couple months at this year’s Big Ten Championship, a single stroke could mean victory over defeat.

“Make,” teammate Brian Campbell calls out. He sinks the putt and picks up his clubs.

Charlie recently changed the way he holds his putter after making its grip thinner. He moved the placement of the rod an inch farther inside his palm. He goes off to the side of the green and takes three practice putts to be sure he is striking the ball straight with his new grip. He is. By now, fellow sophomores Thomas Detry and David Kim have each called out “make” and made their last shots. As each of his teammates finishes, Charlie becomes a little more frustrated. On the golf course, he can make up for failings in his short game with his dominating long game. In the practice drill, he’s stuck. He angrily slaps the white curtains draping the wall with a club, leaving a black stain. A few minutes later, when Coach Small comes back from the driving range, he notices the mark and complains that the curtains were just cleaned. Everyone, including Small, seems to know Charlie did it, but he stays quiet.

Finally, Charlie is at eight strokes and needs to sink a chip from 20 yards to finish.

“Come on, Chuck!” a teammate hollers.

“You got this!” says another.

But he doesn’t. Hauter tells Charlie he better hurry up or they’ll be late for Jock Jams, the student-athlete talent show they are participating in at 7 tonight. Around and around Charlie goes again – he makes a chip shot in two different rounds but isn’t able to finish the other holes at par. At four o’clock, the team starts to head home and then to Huff Hall for their show.

Hauter, walking over to collect his golf bag, tells Charlie he needs to leave by 4:30. Before he too leaves a few minutes later, he tells Charlie this five more times. Although Small told his team members each would stay until midnight if it took that long to finish, he is surprised when he comes in at 4:15 and Charlie is still chipping and putting away. Sometimes, a break will do you good, Small has told Charlie countless times. He believes Charlie can be too obsessive about his game. Charlie doesn’t agree.

And in May, when Charlie will compete in this year’s Big Ten Championship in French Lick, Ind., his obsession with hard work will seem to pay off—he will close a four-stroke deficit in the last nine holes and tie for the Big Ten’s individual player championship.

Yet, just one stroke better and the championship would’ve been his alone.

Charlie doesn’t do a fist pump. He doesn’t even smile.

No witness for Charlie. He did it alone, but he did it.

Johnathan can be reached at [email protected]