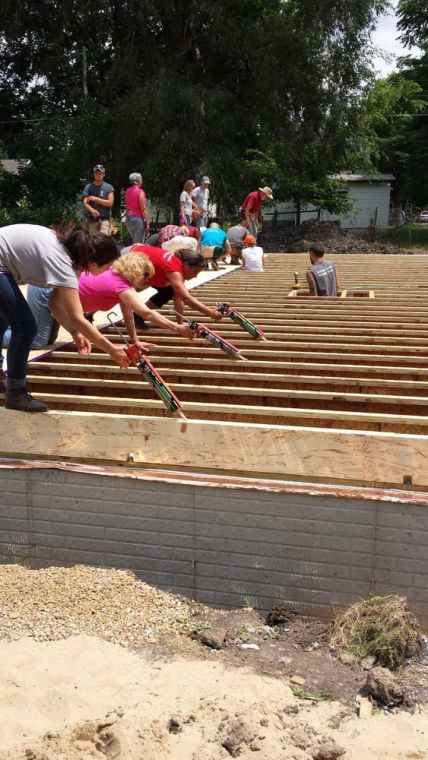 Volunteers at Habitat for Humanity’s Angel Build work on the foundation of the home they are building on Saturday. Nine Methodist Churches are teaming up with Habitat in the project.

Volunteer builders stood in a staggered line at the construction site of Habitat for Humanity’s Angel Build. With caulk tubes in hand, they perched themselves on the foundation, laying glue for the wood floor to adhere.

Habitat for Humanity started construction on a new home for community member Chelonda Green on Saturday at 1304 N. Walnut St. in Champaign under a partnership with nine local Methodist churches.

“I want my children to know what it feels like to be in a safe and steady environment that they can call their own,” Green said in a press release. “We are excited to begin building alongside these amazing volunteers.”

About 20 to 25 volunteers are expected to help with the construction each Saturday.

Development Director for Habitat Kelly Hill said it’s common for Habitat to get a group of churches together to help with home builds — this is the second time they’ve built with a group of Methodist churches.

“Churches have been involved with us really from the beginning, and that’s part of our mission is to engage folks in the faith-based community with us,” Hill said.

“The unique thing about (the Angel Build) is there’s so many of them,” she explained. “There’s nine different churches … (we) reached out to the Methodist churches about a year ago and said ‘Hey, we’re thinking about doing this build, who would be interested?’”

Ron Lyman is president of Champaign County’s Habitat for Humanity, as well as a member of the First United Methodist Church in Champaign.

“We’re all partnering both financially and with assistance with labor,” Lyman said. “Some of the smaller churches are providing babysitting or meals, the ones that have really small memberships.”

The churches have committed to pay $35,000 combined, covering half the cost of the house.

Habitat builds homes with a range of other religious groups in the community as well.

Apart from getting a house, Green also hopes to gain something else from of the project.

“The experience of building — I’ve never built anything before,” she said.

Alex Dowd, a senior at the University, is one of the volunteers helping with the build. He got involved with Habitat after learning more about the organization on Quad Day three years ago.

“I like the hands-on work, and helping the community,” Dowd said. “And it’s a great day to be out — I spend enough time studying so it’s nice to be outside.”

The Angel Build will continue over the next 16 weeks.