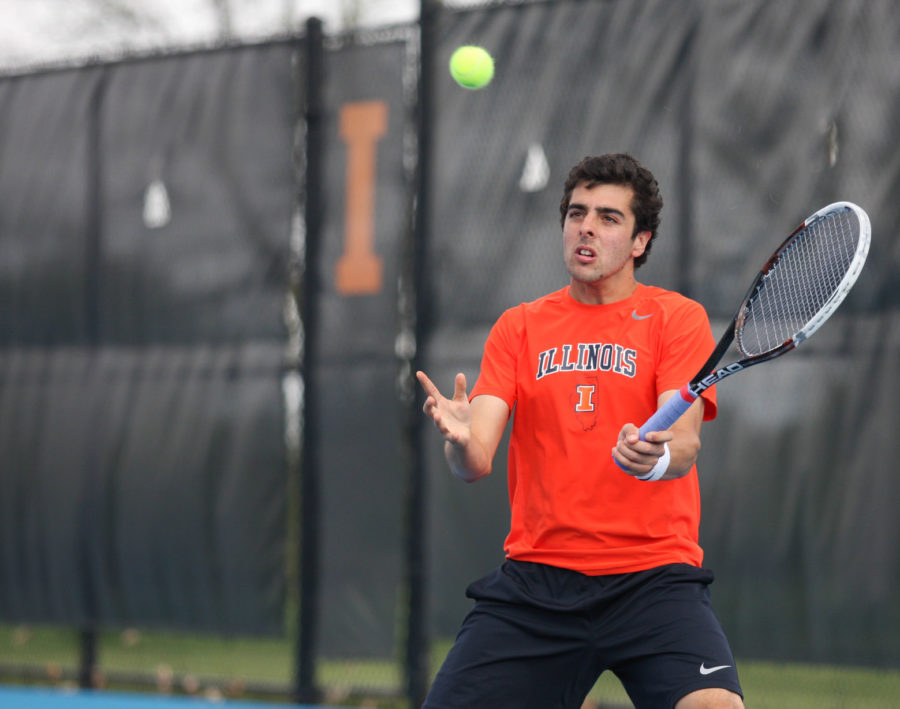 Illinois' Farris Gosea hits the ball back during the first round of NCAA Tennis Regionals against Ball State University at Khan Outdoor Tennis Complex on Friday, May 9, 2014. The Illini won 4-0.

NCAA/ITA All-American rankings were released this week and the Illini men’s tennis team made several appearances in both the singles and doubles rankings. These preseason rankings are released in preparation for the ITA Men’s All-American Championship, which begins on Sept. 27 and is going to be hosted by Tulsa.

Two Illini were ranked in the top 10 in singles: junior Jared Hiltzik at No. 6 and senior Farris Gosea at No. 10. Hiltzik drops two spots from his No. 4 preseason ranking from last season but is up from last year’s final regular season ranking of No. 12. Reigning Big Ten Men’s Tennis Player of the Year Gosea finished last season ranked No. 20 in singles. Senior Tim Kopinski was the third Illini ranked, starting the season at No. 44.

Kopinski and fellow senior Ross Guignon finished last season ranked No. 6 in doubles and begin this year at No. 2 in the country, the pair’s highest ranking to date.

Last year, Kopinski and Guignon were the Illini’s first doubles pair to be named All-Americans since 2007. Hiltzik and Gosea were both All-Americans in singles. Gosea was the first Illini to be the Big Ten Player of the Year since 2007, when Kevin Anderson won the award.

Peter can be reached at [email protected]