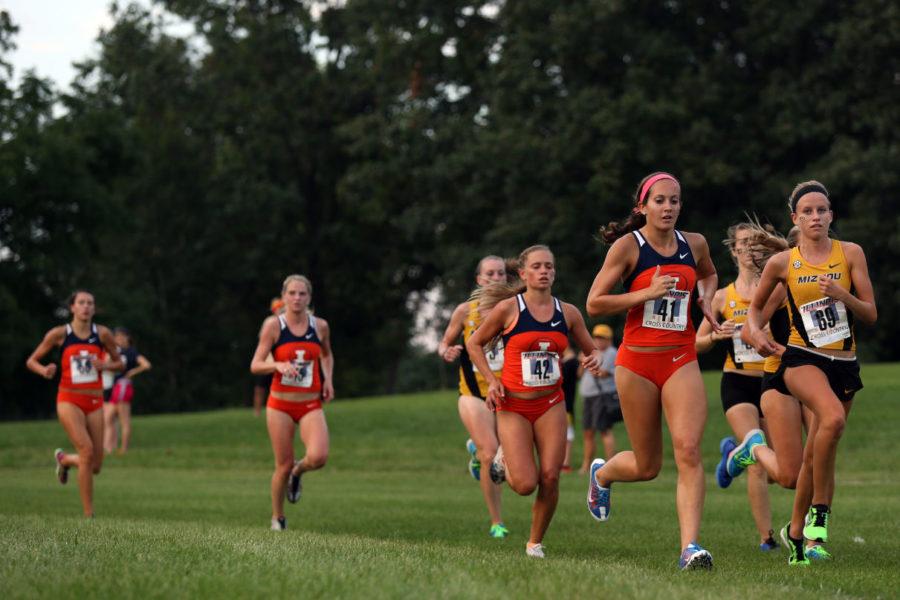 Members of the Fighting Illini women’s track and cross country team run the second lap of the course during the Illini Challenge at the UI Arboretum on Friday, Aug. 29, 2014. The women’s cross country placed second with a combined total of 31 points.

Head coach Scott Jones looks to use the Illinois State Invite on Friday as a start to his plan of building a strong foundation for the Illinois women’s cross-country team.

“There’s always new levels of aspirations. We are still in the emphasis of establishing that base,” Jones said. “To be honest, this year’s going to be really important for that.”

Heading into the second meet of the season, the team is way ahead of where it was last season. Last year, Jones was hired a few days before his runners started practice. This year, the team worked all summer in preparation for the season, becoming more familiar with Jones’ techniques and to each other. Jones noted that senior Britten Petrey and juniors Alyssa Schneider, Colette Falsey and Amanda Fox all made progress over the summer and should compete for the top spot during the season.

One of the essentials for the Illini is to find its leadership. After senior Katie Porada graduated, many runners have risen to the occasion. However, Schneider, who took the individual title at the Illini Challenge on Aug. 29, has made strides to lead the team both on and off the trails.

“She’s building upon what she achieved last year, and she’s expanding the scope of what she is contributing to the team’s success,” Jones said. “She’s doing things behind the scene in a leadership capacity that will be very beneficial.”

After losing the Illini Challenge to Missouri, the team had a week away from competition. During that time, Jones and his runners have assessed where the team is.

During the week, the team practices at the Arboretum and trains by long runs. On Sundays, when the runners don’t have to worry about making it to class after practice, the team travels to off-campus sites to practice long runs. Mondays are focused on recovering from the long run and doing strength conditioning. For the rest of the week, the team runs around campus and on the track in the Armory.

For the team to form a strong foundation, Jones said the first key is to win meets. Although the Illini had individuals win meets, the team as a whole didn’t win a meet last season. For Jones, that is the goal for Friday’s meet to not only reach short-term success, but also long-term.

Michal can be reached at [email protected]