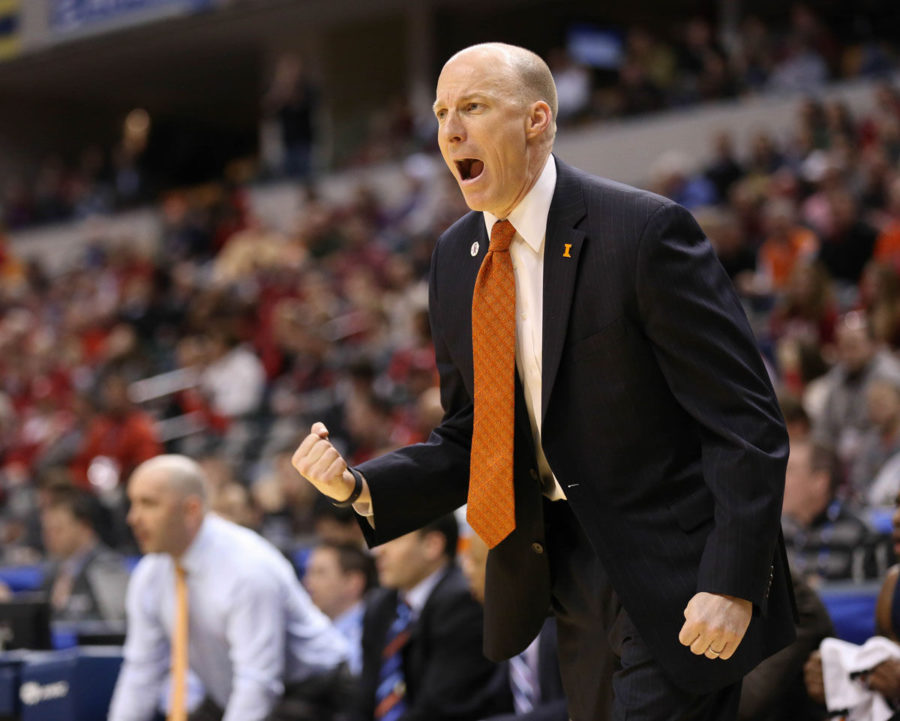 Illinois’ head coach John Groce reacts to a referee’s call during the first round game of the Big Ten Men’s Basketball Tournament against Indiana, at Banker’s Life Fieldhouse, on Thursday, Mar. 13, 2014. The Illini won 64-54.

Jalen Brunson, widely considered to be the best basketball player in the state of Illinois and one of the best point guards in the country, has committed to Jay Wright and Villanova.

Brunson was considering Illinois along with Villanova, but ultimately decided in favor of the Wildcats. He is rated as the No. 22 overall player in the class of 2015 in ESPN’s Top 100. The Stevenson High School point guard revealed his decision Wednesday afternoon at 4:30 in a public announcement in Lincolnshire, Ill. Illini head coach John Groce visited Brunson on Tuesday for one final sales pitch.

This latest recruiting blow for Illinois comes while the wounds are still fresh from last November’s spurning of the Illini by top recruits Quentin Snider and Cliff Alexander. Brunson joins a growing list of in-state talent who decided against staying home to play for the Illini. Alexander, Jabari Parker, Anthony Davis and Derrick Rose are the most recent high-profile players to bolt.

All is not lost for the Illini in the class of 2015, as they still are involved in several other major recruiting battles. They are still in the mix with point guard Jawun Evans out of Dallas, and Groce is scheduled to travel to Texas to meet with Evans on Thursday.

Alex is a junior in AHS. He can be reached at [email protected] Follow him on Twitter @aroux94.