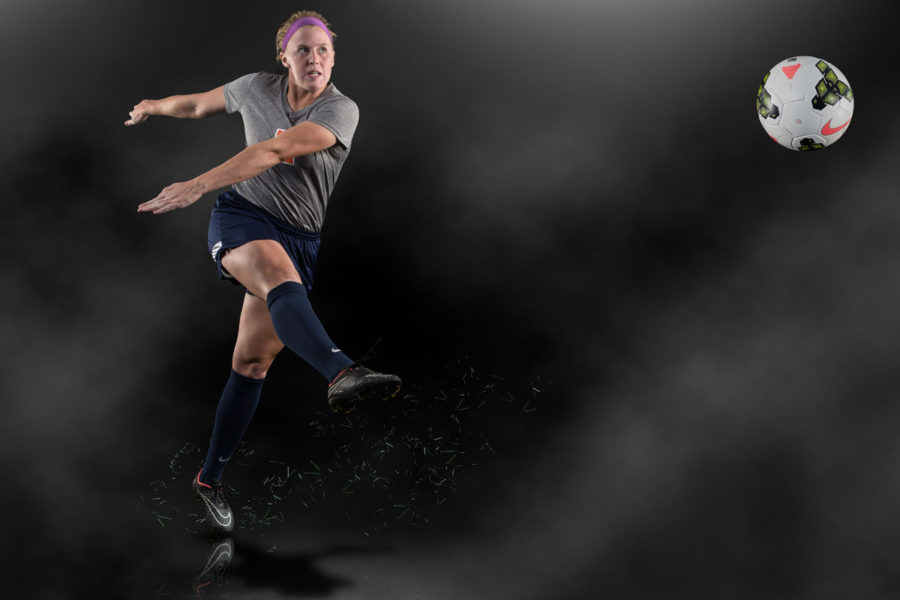 Jannelle Flaws has had this interview dozens of times before: she talks of her injuries, her recovery and her climb to glory. With five goals in two games, and 11 goals in 10 total games this season, that glory is well warranted.

Flaws hasn’t always been used to winning. Despite not doing a lot of it lately, losing is familiar too. Today, it’s the reason she continues to win.

The injury forced her to redshirt her freshman season and marked the beginning of a series of injuries that would eclipse much of her early collegiate career.

She’d return in the 2011 season, which would prove to be a character building year for Flaws. With her confidence depleted, she wondered if she was the same player she was in high school. She took only 28 shots in 22 games and scored only three goals.

Her 2012 season would be a nightmare in comparison. Her nagging knee gave way again during a practice session in March of that year. It meant another surgery, and another season disappeared into thin air. For the second time in three years, she would watch from the sidelines in a knee brace and witnessed as DiBernardo notched her 36th career goal that season. Flaws still only had three.

Flaws would watch game film again and again that year. With the help of her coaches, teammates and family, she wouldn’t give up on the player she knew she could be.

She didn’t delve on missed opportunities, she fed off them. It’s the stuff her next goals would be made of.

Now, Flaws is a long way gone from those days. She is only six goals from tying DiBernardo for third on Illinios’ all-time goal-scoring record, as she sits at 37 career goals and is only 10 away from Tara Hurless’ mark of 47.

At the pace she’s was on this weekend, it’s only two weeks worth of work.

After her stellar 2013 season in which she scored a nation-leading 23 goals and broke the Illinios single-season scoring record, she has a target on her back. But as she proved in Sunday’s 3-0 win over Purdue, you could shut her out for 80 minutes, but she’ll expose you in the last 10.

Flaws scored a hat trick in the games final minutes.

“It’s not that much different,” Flaws said. “I think I hold myself to a certain standard where I always want to perform like that so if teams are focusing on me it’s just more incentive for me to play harder and to get those goals just to keep working hard.

“In high school, club I had the same thing. I’ve been a goal-scorer all my life so I know what it’s like to be marked … they want to mark me, they can.”

Flaws loves being a goal-scorer, and it’s a craft she continues to perfect. Against Indiana on Thursday, Illinois would win a free-kick outside the 18-yard box. Indiana keeper Sarah Stone set up a wall of five to defend the kick.

It wouldn’t matter. Flaws’ powerful shot curled outside and around the defensive wall to pull off a maneuver Roberto Carlos would be proud of.

“The thing about a goal-scorer is they just keep at it, they just keep going, they know the next opportunity that they get might be the one that they score,” head coach Janet Rayfield said after Illinois’ win against Purdue. “You like that mentality in a goal-scorer. Once you get one and the confidence it kind of brings … it certainly opens the opportunity for a second and in Jannelle’s case a third.”

Now, she considers everything that’s hers, her teammates as well. Her goals and her awards included.

“I have gone through the injuries so to be at this level playing that well and to get recognition like that it’s just an awesome thing, but as much as it’s an individual honor it’s a team honor,” she said. “I can’t (score) those five goals by myself. It may have my name on it, but it’s definitely an Illinois soccer award.”

Flaws is simply the icing on top of it all, the glory-getter. She’s hard to beat on the field, and harder to beat off it. She has now scored 34 goals in 33 games since the beginning of the 2013 season, five more than any other player in the nation. For her, there’s nothing new about the accolades.

There’s nothing new about the interviews she has given up until now, and will undoubtedly have to give later.

For her, the next big step looms. The big leagues are now starting to take notice of her. She was called up to the US Women’s National Team U-23 summer camp in July, and she hopes they continue to knock at her door.

She’s become a better player than she was before, and it’s no wonder she wants more.