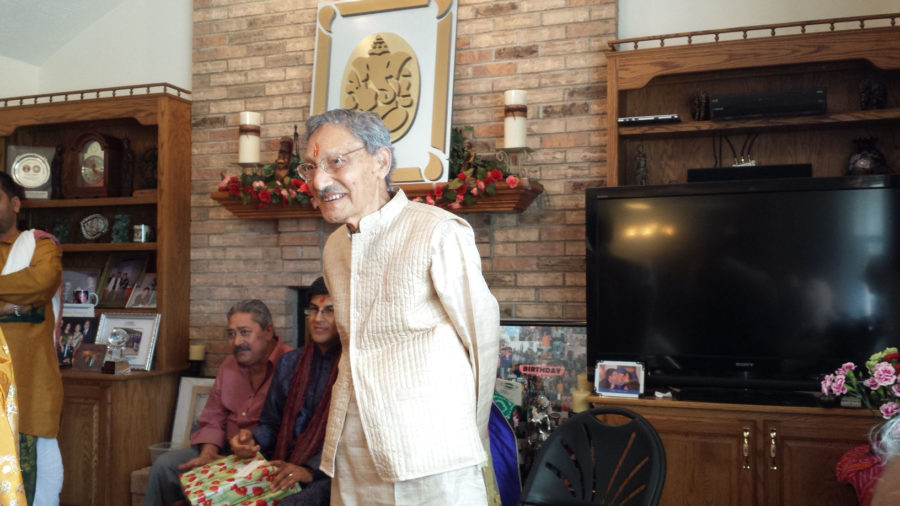 Janardan Kukreti has more than a century’s worth of life experiences under his wing.

On Saturday, Kukreti, former University professor of veterinary medicine, and his friends and family members gathered to celebrate a major milestone in his life: his 102nd birthday.

Forty guests arrived in the morning for a traditional Hindu puja ceremony in the home of Kukreti’s son, Mukesh. During the ceremony, a priest called on the ancestors and asked for their blessings.

The night concluded with a ceremony at the Urbana Plaza Hotel during which Kukreti was recognized and honored by his guests and relatives.

Kukreti was born in a small village in Uttar Pradesh, India, on Oct. 11, 1912. The village was simple and lacked modern amenities, such as gas and electricity.

He earned a degree in science and math from the University of Allahabad in India in 1934. Kukreti said the university was an important location during Gandhi’s non-violence movement; he had the opportunity to witness speeches from prominent politicians who believed in Gandhi’s principles.

In 1960, Kukreti was selected by a technical corporate mission program to attend the University of Illinois and he earned his master’s degree in veterinary medicine in 1962.

He then went back to India and taught at Mathura Veterinary College. In 1968, Kukreti received an offer from the University for a two year teaching job in the College of Veterinary Medicine.

“There in India, I had a permanent job, and here I would have a temporary job,” Kukreti said. “I had to think whether to go or not to go. But I thought, ‘No risk, no gain.’”

After he began working at the University, his temporary job turned into a permanent job, and he brought his family to the United States a few years later. Kukreti taught at the University for 18 years before retiring in 1986.

Kukreti continues to live in Champaign in the home of his son, Mukesh, and said he is content being in the company of his family members. He has five children, eight grandchildren and five great-grandchildren, all of which reside in the U.S. except for his eldest daughter, who lives in India.

“All my children and grandchildren take good care of me,” he said.

When Kukreti made the move from India to the U.S., he carried on principles like family values, an appreciation for strong friendships and a love for Indian and Hindu traditions with him.

“Wherever you are living, you should have your culture,” Kukreti said.

Though he said he misses the family and cultural celebrations he left behind in India, he also appreciates the American lifestyle and the ability to implement Indian culture.

“Because I spent 55 years in India and the rest here, I enjoyed the best of both worlds.”

Kukreti is fully aware that his age prompts incredulity from others.

For his 100th birthday in 2012, he went to India to take part in one of the 10 celebrations and ceremonies held for him in the United States and India. Some of his former students were in attendance, and they warmly welcomed him and were in awe by his presence on such a milestone.

“The love and respect they gave me was overwhelming,” Kukreti said. “I couldn’t even recognize some of them but they recognized me. I didn’t think much about my birthday, but when it was celebrated 10 times, I thought, it is a milestone.”

Kukreti’s status as a centenarian has also been recognized by President Barack Obama, who has sent birthday letters to him each year since his 100th birthday.

In regards to Kukreti’s longevity, he said he goes by the principle of the “Three F’s” to promote good mental and physical health: good family, good friends and good food.

“For good health, the prescription is exercise, doing things in moderation, being satisfied with what you have, being happy and thanking God for whatever he has given you,” he said.

Kukreti has a task on his to-do list that he’d like to complete at some point in the future.

Kukreti not only brought his appreciation for friendship and culture to the U.S., but also shared his beliefs and the wisdom he has gathered over the years with his children.

Mukesh Kukreti said there is a saying that the family likes to live by: “Don’t do anything just because you’ll be awarded for it,” he said. “There is a quote in the Gita that says, ‘Do thy duty; reward is not thy concern.’”

Umesh Kukreti, his other son, said the most important lesson his father ever taught him was the value of honesty.

“My father has heard every excuse in the world,” he said. “You can give him any excuse, but it’s not going to work. The truth is bitter but it’s better. Always be honest.”

Kukreti wrote a memoir that was published on his 100th birthday, “My memoir, by Dr. J. Kukreti,” and is currently writing another book about life after 100 called, “Crossing the Century: Life after 100.”

With all the hard work Kukreti has put in throughout his life and the experiences he’s had, there is one particular lesson he likes to give.

“Whatever you do, take full interest in the job, and have faith in God,” he said. “During my life, I had ups and downs — in everybody’s life it will be like that. … Ultimately, you will get through.”