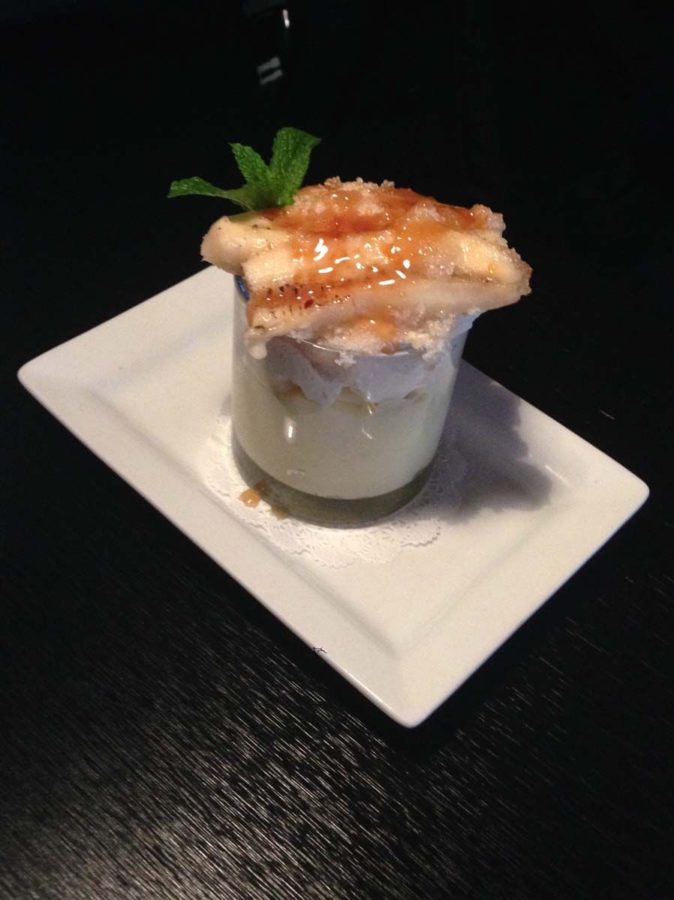 The T.R. Nelson's Banana Cream Pie is one of the gluten-free options available at Destihl when specially prepared without the crust and served in a glass.

As the number of people avoiding gluten continues to rise, restaurants and grocery stores are adapting the products they offer to meet the demand.

According to a 2013 NPD group survey, the number of people diagnosed with Celiac disease, an autoimmune disease that leaves a person unable to digest gluten, is four times higher than it was 50 years ago.

Kristi Emilsson, grocery manager at Common Ground Food Co-operative in Urbana, said that she has seen an increase in the gluten-free food offered at the establishment in the last four years she has worked there.

“There are a lot of individuals that are going gluten-free, not necessarily because they actually have Celiac disease or are gluten-intolerant, but because they’ve discovered that if they go gluten-free, they feel better,” Emilsson said.

Julia Addis, freshman in DGS, was diagnosed with Celiac Disease 17 years ago, but coming to campus this year meant having to adjust to getting food near her dorm.

Addis said she goes with her roommate, who also eats gluten-free, to pick up groceries at County Market; however, with the limited selection, she often has to have her mom send her packages containing her favorite foods.

She said she has been able to find gluten-free pizza at Mia Za’s and Domino’s. Sometimes, choosing her meals just means changing an order by a little bit.

“I eat a lot of salads. I can really go anywhere with my friends; I just get a salad or a hamburger without a bun,” Addis said.

For a more extensive selection of products, Common Ground Food Co-op is only a short bike ride from campus.

It contains a grocery store as well as a bakery and deli serving fresh bread and baked goods made with gluten substitutes.

There are pumpkin chocolate chip muffins, a very popular product with gluten-free customers, and seasonal treats such as gingerbread cookies or cranberry and apple scones, which are also gluten-free.

Workers are careful to prevent cross-contact between wheat and non-wheat items after they are baked by individually wrapping the food before placing it in the display cabinet, Emilsson said.

Udi’s and Rudi’s are two brands of gluten-free bread that taste very similar to a regular wheat or white loaf, according to Emilsson. Crackers, pretzels and cookies put out by brands such as Glutino, Pamela’s and Enjoy Life Foods can serves as possible snacks for those avoiding gluten. Those skilled in the kitchen can purchase gluten-free flour, oats and baking mixes to make recipes from scratch as well.

Packaged items in the stores that are marketed as gluten-free are made by companies that have undergone certification to ensure their facilities will not contaminate products with gluten pathogens.

This can lead to the price differential between regular and gluten-free items, Emilsson said. Along with the costs of certifying and updating facilities, gluten-free products are generally made with higher-quality ingredients, putting them more in the price range of organic and vegan food, rather than with mass-produced chips and cookies.

Companies that haven’t been certified in the past are now taking the time to get their facilities checked and verified, she said.

“It means that conventional companies are recognizing both that there is a market interest in those products, and that what is necessary and safe for people that really truly have that sensitivity is to dedicate that facility,” Emilsson said.

When students want to go out to eat, there are many restaurants in the area that serve gluten-free meals, but Destihl in downtown Champaign has one of the more extensive menus. Addis says that it is one of her favorite places to go with her parents when they are in town.

Customers can order from a large selection of options, from signature entrees such as the Gaucho Skirt Steak and Cedar Plank Salmon to favorites such as the four types of pasta, various salads or handmade pizzas.

The chefs will also work to adapt popular items on the main menu to be gluten-free, according to Ray Manning, the restaurant’s manager. For example, T.R. Nelson’s Banana Cream Pie, one of the most popular desserts, can be served without the crust in a decorative glass, eliminating the gluten in it.

Although there is gluten in other food offered at Destihl, Manning said the restaurant’s staff does its best to know more about gluten and ways to avoid it when necessary.

“We are very careful to avoid cross-contamination in the kitchen. Our stations are very clean, and each station is very aware of what they contain that has allergens in it,” he said.

Destihl is also a brewery, and makes gluten-free beer, which is generally hard to come by because the main ingredients of regular beer, such as wheat, rye and barley, all contain gluten.

The Anti-gluten Cherry is also on the menu, which is a Belgian-style, gluten-free ale made from rice, sorghum and fresh cherries.

According to Manning, the drink is a favorite with customers, whether they are gluten-free or not.

“We have a lot of people who drink it, because they like it, not just because it’s the only thing they can have,” he said.

Although gluten-free options near campus are more available than in the past, Addis said she wishes she could find gluten-free items such as chocolate cake or Insomnia Cookies that are close to the regular wheat versions.

Though there are many products with gluten-free substitutes, she said she has always wanted to try the original Goldfish crackers.

“They just intrigue me!” Addis said.

Isabella can be reached [email protected]