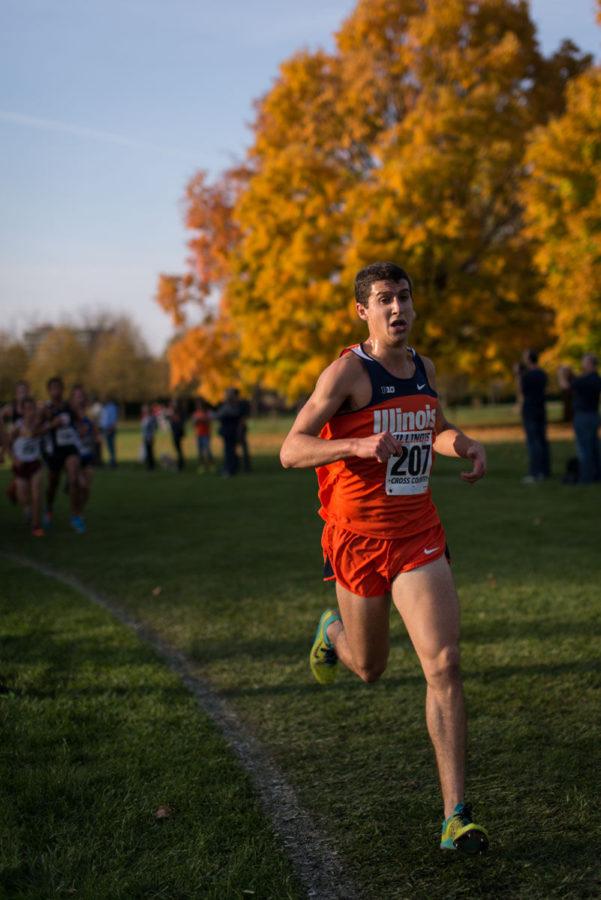 In its final regular season meet at the Illini Open, the Illinois men’s cross-country team did not place. Only three Illini runners finished the race.

The NCAA requires a minimum of five runners to finish for a team to place. Bradley took first in the four-team field, excluding Illinois.

However, for Illinois, team placement was not on the agenda for Friday’s meet.

“We weren’t really too concerned with that,” assistant coach Dan Barry said. “We only had four guys in the first place, so we set it up for ourselves just to get those four guys in and just to get them a hard effort and that’s what they were able to do.”

To begin the race, Illinois started off with four runners. Junior Liam Markham held a commanding lead in the early going of the race, while freshman Alex Gold trailed him in second place. Gold went on to take sixth and first for the Illini with a time of 25 minutes, 52 seconds. Markham, however, did not finish the race.

Markham and Illinois’ coaching staff saw the Illini Open as a chance for Markham to prepare for the Big Ten Championship next Sunday in Iowa City, Iowa. The plan was to have Markham come out as aggressive as possible to experience a faster race pace and not worry about finishing the entire race.

“That was good just to replicate what the bigger races are going to be like,” Markham said. “(It’s) definitely a step forward to come off it now and get another up-tempo (race) to get the legs flowing again. My body was able to recover and feel really good after.”

“These guys had a week off that just raced today, so this was an opportunity for them to get something in before they take a couple weeks off,” Barry said.

Burgoon finished second overall for the Illini and placed 18th, completing the race in 26:14 and Notton took 26th in 26:42.

“They’re still learning, the 8k is a big step up for them from high school,” Markham said. “It’s a good challenging experience that will get the guys mentally and physically ready (for next year).”

Friday was also an opportunity for Barry to take the reigns as head coach for the day while head coach Jake Stewart had other obligations to attend.

“It’s nice to come out here and be with the guys and have a little more responsibility,” Barry said. This is Barry’s first year as a volunteer assistant at Illinois after volunteering for the Oklahoma and Massachusetts-Amherst.

With the Illini Open complete, and the regular season over, the focus for the Illini now shifts to the Big Ten Championships.

“This is where the season begins for us,” Barry said. “We’ve gotten all the work in up to this point. Coach Stewart has really positioned the guys in a good spot, and the guys are feeling good about it. We’re at that part of the season where things start to really roll.”

Matt can be reached at [email protected] and on Twitter