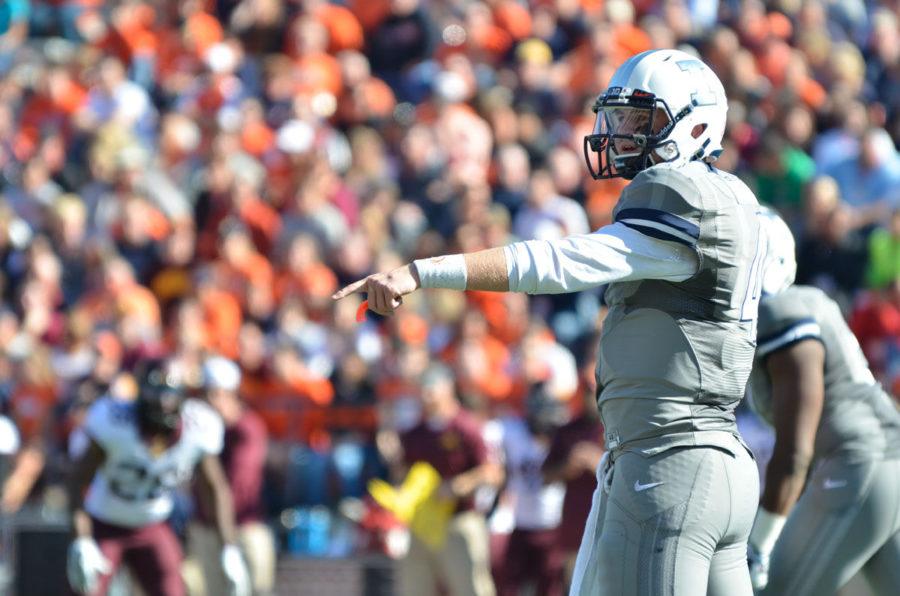 Illinois’ Reilly O’Toole calls out a play during the homecoming game against Minnesota at Memorial Stadium on Saturday, Oct. 25, 2014. The Illini won 28-24.

The first time Reilly O’Toole celebrated Saturday’s win over Minnesota, he was goofing around with running back Donovonn Young.

But a penalty quieted Illinois’ rowdy sideline. After the Gophers unsuccessfully heaved a pass for the end zone on the game’s last play, Illinois got a second chance to celebrate.

This time, O’Toole found his coach.

“He comes running up and we gave each other a big hug, which is kind of neat because the victory is fleeting,” offensive coordinator Bill Cubit said.

In those seconds of chaos eclipsed by a roaring crowd and ecstatic players, Cubit said how proud he was and how much he loved him.

The quarterback responded with a simple, “Thank you for everything.”

Cubit got to watch O’Toole seal the highlight of his collegiate career — an upset win over Minnesota.

“There are so many of those (bad plays) out there, people don’t remember the good plays,” Cubit said. “Well, now they’re going to remember that the kid led us to a Homecoming win against a Big Ten division leader.”

O’Toole, though modest about what worked on Saturday, agreed that this win was more than just a “W” on the schedule. It was more than a freshman year Fight Hunger Bowl game appearance.

“The bowl game was a lot of fun,” O’Toole said. “But as a freshman, I didn’t really contribute much to that game. So it was nice to contribute to a win … hopefully there are some more moments like this later in the year, but I think having it be my senior year and being with these guys for as long as I have been, it’s making each win more and more special.”

A backup to Nathan Scheelhaase his first three years and then again to Wes Lunt as a senior this year, O’Toole has put in the work to become one of Illinois’ most respected players according to team members and coaches, even if he has not consistently been considered ‘the’ quarterback.

But Saturday was a chance for O’Toole to relax and play his game without trying to force plays. While he didn’t do anything different to prepare, O’Toole admitted that he did feel more at ease. The results showed with the combination of a bye week and a state of comfort.

O’Toole went 14-for-21 passing with one touchdown and 118 yards. He rushed for 59 yards on 17 carries and one touchdown.

It was his second-straight game without an interception, compared to throwing three at Nebraska and another against Purdue.

“I just said to play within yourself,” Cubit said. “You don’t have to go out there and be Wes Lunt; you don’t have to throw balls into tight holes; just play your game and I’ll tailor the game plan to what you do best. And he did that.”

Former quarterback Scheelhaase watched the game and, in a group text with former players, congratulated O’Toole on his win. Scheelhaase considers O’Toole one of his best friends and was extremely proud to see him step up among the questions.

“I thought he should be the guy out there with Wes being hurt,” Scheelhaase said. “There’s no doubt in my mind about that. I’m not a big believer in rotating quarterbacks. First and foremost, my hopes were that he’d be the guy that’s out there and that he’s the guy looked at as a leader and as the quarterback of the team for the entire game. I was pleased with the fact that he did get majority of the reps.”

While the Illini took an early lead from the Gophers, the third quarter saw the home team struggle. As the game clock ticked down in the fourth quarter, O’Toole waited to get back on the field for a chance to put the score back in Illinois’ favor.

But the game-winning touchdown came off a fumble recovery from cornerback V’Angelo Bentley and offered O’Toole a small moment of relief.

“Seeing the ball on the ground, and it was like in slow motion,” O’Toole said. “And we scored, and I was kind of looking like, ‘All right, well our luck it’s probably going to be forward progress or something.’ But then it stood and I got chills on the sideline, which has never happened before.”

As Illinois took the lead, the goosebumps dissipated, replaced with nerves.

But for Cubit, O’Toole did almost everything right save one play. It was a short route pass that could have made a big impact, but O’Toole didn’t throw it, and even O’Toole remembers how that play could have saved the stress of the last minutes of the game and made the midfield meeting happen sooner.

For Cubit, O’Toole finally settled into the role of a leader on the field Saturday. He learned one lesson that he’ll carry over into the matchup with Ohio State this weekend.

It was after the play when O’Toole came up to Cubit telling him why he didn’t throw the ball.

“Coach, I was afraid of a hand getting knocked on the pass,” O’Toole said to Cubit.

“I wouldn’t call that if I didn’t trust you,” Cubit said. “So don’t ever play scared.”

O’Toole looked at him.