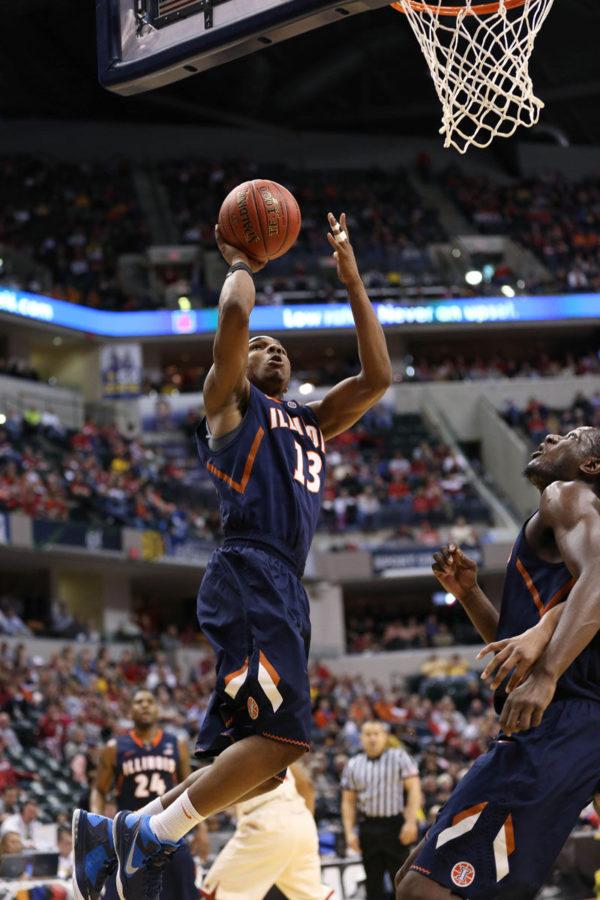 Illinois' Tracy Abrams (13) attempts a layup during the first round game of the Big Ten Men's Basketball Tournament against Indiana at Banker's Life Fieldhouse, on Thursday, Mar. 13, 2014 The Illini won 64-54.

At first, Tracy Abrams didn’t think the injury was that bad.

He was in shock and a few seconds later he felt the pain.

“I knew something was wrong,” Abrams said.

As he lay on the court near one of the baskets at Ubben Basketball complex with pain shooting through his right knee, his thoughts turned to God.

“My first thought was that God has a plan for me,” Abrams said. “Basically it’s crazy because I instantly thought about that.

“I just know that God has a plan for me. I’ll be better then ever when I come back, so that’s my mindset. I get to work on my game and focus on a lot of stuff that I couldn’t focus on.”

Abrams was being guarded by Ahmad Starks in a two-on-two drill when it happened.

While posting up Starks, he turned and put up a floater that felt normal.

Then he came down.

Abrams was rushed to the training room. While being examined, he reached out to friends and family for the first time.

First, he talked to his parents. Abrams mother, Felicia Sales, tried to comfort her son.

“The first thing my mom said was that I would be alright,” Abrams said. “It was real good to hear her say that right off the bat.”

After talking to his parents, Tracy called his former AAU coach.

Mike Mullins wasn’t expecting a call from Abrams but when he picked up the phone, he could tell by the tone of Abrams’ voice that something serious had happened.

“He was pretty sure he did something substantial to it,” Mullins said. “He was understandably upset.”

Mullins, who coached Abrams and fellow Illinois players Joseph Bertrand and Nnanna Egwu on the Illinois Wolves AAU team, tried to comfort Abrams over the phone.

“Tracy’s an extremely tough and resilient young man,” Mullins said. “You have to be. To come from where he’s come from and get to where he’s been as a person, as a student and as a basketball player. I just tried to remind him of that. That God has a plan for him, but we don’t know what it is yet.

“(I told him that) he would recover and this was just another obstacle placed in his way that he could and would overcome.”

After hearing about the injury, Abrams’ Mount Carmel High School coach Michael Flaherty also reached out to show his support.

He relayed a similar message as Sales and Mullins: “Hang in there.”

While Abrams was emotional at the time of the injury — calling it one of the worst days of his life — Flaherty said Abrams’ toughness was key in dealing with the initial emotional impact of the injury.

“He’s a tough kid,” Flaherty said. “He doesn’t need to lean on anybody. He’s aware of what’s in front of him and he’s tough enough that he’ll find a way to make it into a success.”

While in the training room, Abrams realized it was bad.

An MRI an hour later revealed the worst. Abrams would miss the season after tearing the anterior cruciate ligament in his right knee.

Abrams had surgery to repair the ligament on Oct. 22.

About a month removed from the injury, Abrams had come to grips with what had happened.

Dressed in the same orange uniform and Nike basketball shoes as every other member of the Illini at the team’s media day, Abrams looked as if nothing had happened to his knee.

Abrams appeared, from afar, to be as ready to go as the other Illini in uniform until his shoes came into view. Although he looked the part from shoulders to knees, he hadn’t tied his shoes.

Abrams won’t play for the Illini this season, but he will add things from the sideline that he wouldn’t have been able to add on the floor. Abrams will act like another assistant coach.

Egwu echoed Abrams’ statement, saying that he will add a different view now that he’s off the court.

With his year off, Abrams hopes to break down his ball handling and shooting before building each aspect from the ground up. He said he wants to make the most of his time off the court.

“I’m just here to learn as much as I can learn,” he said. “And not just sit there and not take advantage of the opportunity that I have.”

On the court Abrams leaves a void. Not only will Illinois miss his career-best 10.7 points per game from last season, but the Illini will also miss his voice.

For Starks, who will more than likely start at point guard, Abrams’ injury was an unwelcomed shock.

“Tracy’s been one of my main supporters since I’ve been here,” Starks said. “He’s been helping me along from day one. Whether some people think, ‘Oh, we’re competing against each other and everything,’ Tracy’s been the main one getting me adjusted to the system and helping me through the whole process.”

Although Abrams won’t play for the Illini this season, the team refused to say the phrase “without Tracy.” Even without him on the floor, Abrams is still a big part of this year’s Illini.

Nicholas is a junior in Media. He can be reached at [email protected] and on Twitter @IlliniSportsGuy.