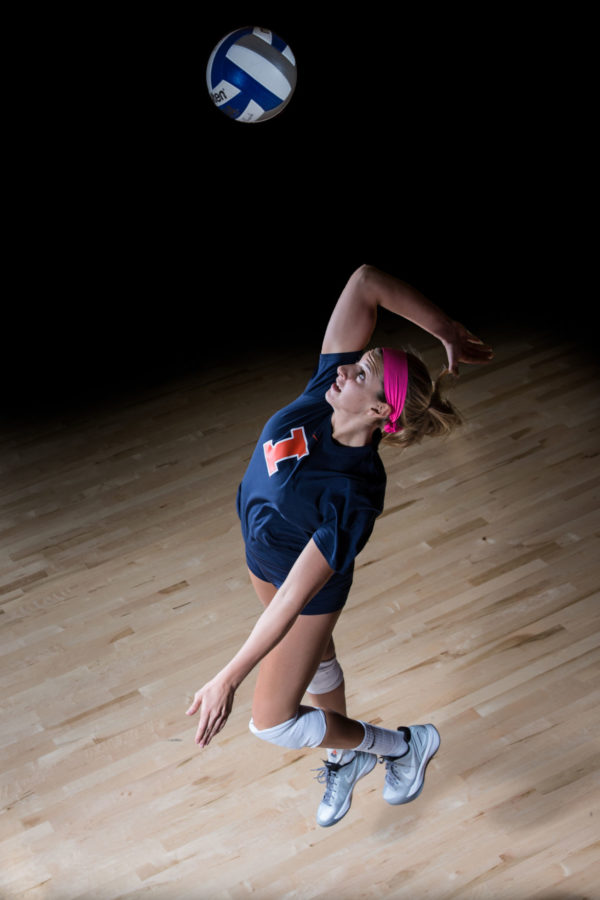 Junior outside hitter dominates in both road victories over both Big Ten Michigan schools, first since 2003.

Jocelynn Birks is a terminator. At least that’s one of head coach Kevin Hambly’s nicknames for her.

Hambly, who comes up with creative nicknames for the junior outside hitter, called Birks a “terminator” earlier this season in regards to her ability to put away kills, but she means so much more to the Illinois volleyball team than the nickname suggests.

Birks’ ability was on display over the weekend as Illinois defeated both Michigan and Michigan State on the road in the same weekend for the first time since 2003. In both matches, Birks helped lead the Illini to victory, tallying 42 kills, 27 digs and a .266 hitting percentage for the weekend.

“It was cool,” Birks said. “I was happy that (the team) needed me to contribute in that way and that I could do that for them.”

Although it might sound cliché, Birks can do it all on the court. She has the athletic ability, power and skill necessary to be a dominant frontcourt player but can also rotate into the back row.

Birks can score from anywhere on the court, whether on a kill, a block or a service ace and has said she doesn’t mind doing whatever it is her team needs her to do to get the win night in, night out.

Against both weekend opponents, the Illini needed Birks to take a high volume of swings. The team didn’t pass well on the weekend and, as a result, the brunt of the offensive swings were funneled towards the outside and opposite side hitters.

“Our passing wasn’t the best this weekend, so the outsides got a lot of balls,” junior setter Alexis Viliunas said. “It was awesome that (Birks) was still putting them down even if my sets weren’t the best.”

Birks took 50 swings against the Spartans and another 61 against the Wolverines, but still hit a fairly high percentage — she kept her hitting percentage above .220 in both matches.

While she didn’t lead the team in kills on the night, Birks put in a solid performance to start the weekend, finishing Friday’s match against Michigan State with 16 kills and 14 digs and her 12th double-double of the year.

Against Michigan on Saturday, Illinois not only needed her scoring, but also relied on Birks to help motivate the team after the Illini dropped the first two sets to the Wolverines. Birks finished the night with a team-high 26 kills to go with 13 digs and a .311 hitting percentage, and helped lead the Illini to a five-set comeback win in the process.

“She definitely brought us to victory,” Viliunas said. “She played solid this whole weekend.”

Hambly said having Birks carry the offense is a luxury at times.

“Sometimes when no one else can score, she can give us eight, nine, 10 points a set,” Hambly said. “That’s what makes her special.”

While she’s both versatile and selfless on the court, Birks is also hardworking off it.

Her hard work and “lead by example” attitude can be linked to her first year on the team, when she redshirted behind first-team All-American outside hitters Colleen Ward and Michelle Bartsch.

Birks said she learned a lot about leadership and hard work from watching Ward and Bartsch her first year with the Illini, and the added knowledge has paid off.

This season, Birks is leading the Big Ten in points, is second in kills and is 13th in service aces.

“I just like being out there and being able to pass and dig balls and block and everything,” Birks said. “I just think it’s more fun being able to do it all.”