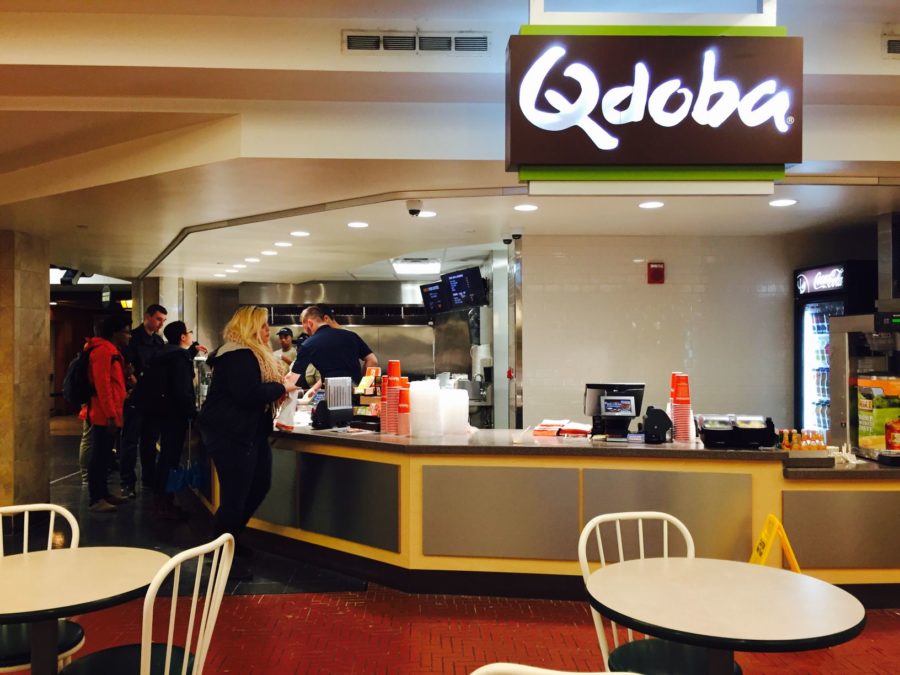 Qdoba Mexican Grill returns to campus this week at its new location in the Illini Union food court.

Starting this week, visitors of the Illini Union can hear the chanting of “Come buy a burrito at Qdoba!” echoing from the northwest corner of the basement floor.

After leaving its Green Street location in 2013, Qdoba Mexican Grill has returned just down the street in the Illini Union food court.

Although it will be competing with a multitude of other Mexican restaurants on campus, Qdoba offers a unique item that its menu centers around: Qdoba queso.

Qdoba is a cafeteria-style Mexican restaurant. Customers are able to choose from a variety of options including tacos, quesadillas, Mexican gumbo, nachos, salads, breakfast and the classic items — queso burritos and burrito bowls. The restaurant prides itself on the variety of fresh food choices they offer, especially the queso. The dip is made from American, Monterey Jack and cheddar cheeses, as well as tomatoes and poblano peppers.

“I think Qdoba provides a quicker alternative to Chipotle, and I like that there are more options,” said Anirudh Vedam, junior in LAS.

The new variety offered is what will keep Qdoba from being squashed by competition. Mona Patel, senior in Engineering, admitted she would choose “Qdoba over Chipotle hands down.”

Last year for a limited time, the restaurant offered three types of queso: their signature three-cheese queso, Queso Diablo and Queso Verde. Queso Diablo, a spicier version of the original, received such positive feedback that the restaurant made it a permanent addition to the menu.

In order to promote customization and offer their customers as many choices as possible, Qdoba has introduced the new concept of flat fees. Each menu item has one cost, and an unlimited amount of extras can be added for free. This includes guacamole and grilled vegetables.

The menu at the Illini Union is opening with Qdoba’s core menu items of burritos, burrito bowls and gumbo instead of the normal full service menu. Next semester, hours and menu selections will be expanded.

Qdoba has returned to the University’s campus on account of the feedback received by the annual Illini Union campus-wide survey. This survey allows the Union to identify and evaluate what students like, dislike and desire in order to communicate with vendors and provide the best service possible.

Lori Holmes, manager of vending contracts for the Illini Union, said that students ranked Mexican as “the number one most desired non-represented concept for the Illini Union food court.” Qdoba was one of the highest-ranked brands among the survey. Holmes noted that Qdoba’s ranking was high due to the fact that it covered most of the options provided on the survey, including fresh ingredients, healthy options, vegetarian options, made-to-order items and entrée salads.

The Illini Union is at the center of campus and draws students in for studying, relaxing, socializing, RSO events, campus events and food. The proximity and accommodations of the Union are what Qdoba hopes will draw large crowds to its new dining location.

Rachel can be reached at [email protected]