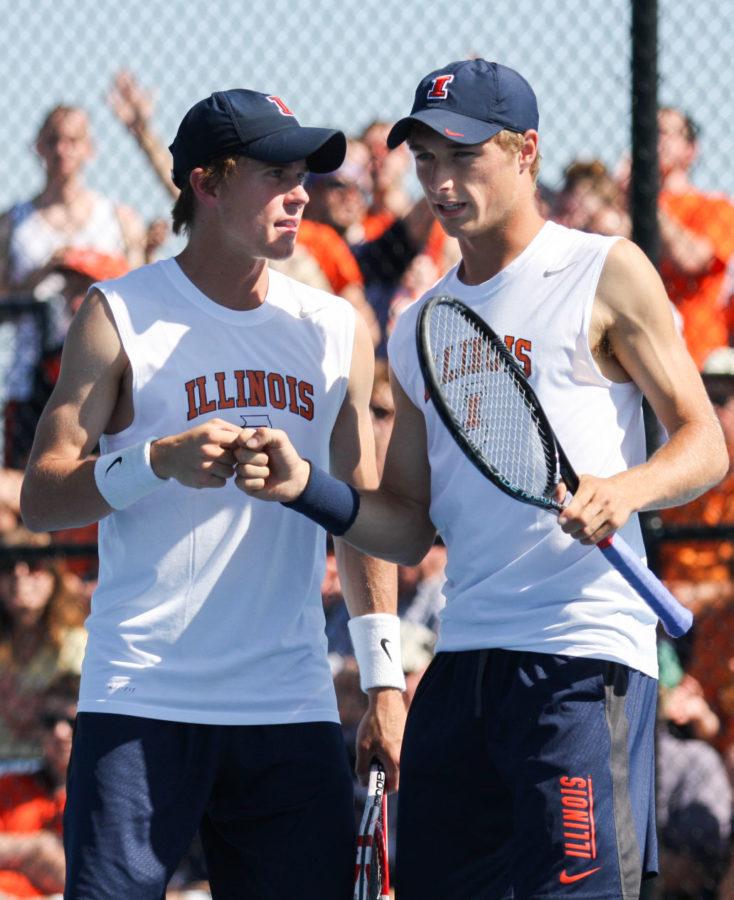 Illinois’ Tim Kopinski and Ross Guignon briefly celebrate during the NCAA Tennis Regionals against the University of Memphis at Khan Outdoor Tennis Complex on Saturday, May 10, 2014. The duo took second at the ITA Intercollegiate Indoor National Championships this past weekend.

Tim Kopinski and Ross Guignon took second place at the ITA Intercollegiate Indoor National Championships this weekend as they put together their best performance of the fall.

The pair came into the season as the No. 2 doubles team in the country, but it’s been an up and down season. After a first round loss at ITA All-Americans, the pair went onto the consolation finals. A few weeks ago, they dropped only their match at Texas A&M’s Conference Challenge. This weekend, Kopinski and Guingon’s play reflected their preseason ranking.

“I think we’ve been progressing as the semester’s gone along, each of us individually, and then it sort of came out as a team this weekend,” Guignon said. “We’re just trying to play our best tennis … We feel like if we’re playing our best tennis we can beat anybody.”

Kopinski and Guignon received an at-large bid for the tournament. In their opening match, they defeated the ITA Atlantic Regional Champions, Ryan Shane and Luca Corintelli of Virginia, 6-3, 6-2. A 7-6(4), 6-3, quarterfinal win against Central Regional Champions Tomislav Gregurovic and Tin Ostojic of Wichita State advanced the Illini to the finals. In the first set against the Shockers, Kopinski and Guignon came all the way back from a 4-1 deficit to win.

“They played worry-free tennis … They weren’t worried about ‘who are we playing’ and ‘what does this mean,’” assistant coach Marcos Asse said. “They got back to just playing and when they do that, get a lot of clarity out of their game, start executing better, play with less nerves, a lot of positives come out of that.”

The pair lost a tough final match to the tournament’s No. 1 seeded team, USC’s Yannick Hanfmann and Roberto Quiroz. Asse said USC came up with some shots that even they were surprised by. According to Asse, after the match, USC’s coach said that to say they got lucky was an understatement.

There’s no time to rest for Kopinski and Guignon, though. They’re entered in the Atkins Center’s JSM Challenger doubles bracket as a wild card this week.

Jared Hiltzik also competed for the Illini in New York. He lost a hard-fought three set opening match to No. 28 Ryan Shane of Virginia, the same opponent that Kopinski and Guignon faced. Hiltzik won his first match in the consolation bracket over TCU’s Cameron Norrie but then fell to Roberto Cid of South Florida. Hiltzik entered the tournament on a five match losing streak, dating back to the Midwest Regional final. Despite the 1-2 performance this weekend, Asse said he thinks Hiltizk improved throughout the tournament.

“As the tournament went on, he (Hiltzik) kind of found his game back a little bit and squeaked his way through a couple sets here and there. He ended up playing better than he started,” Asse said. “I think there’s something that’s missing when you haven’t won in a while, he’s put himself in a place to play better tennis where he can start winning again.”

Hiltzik will also compete in the JSM Challenger at Atkins Tennis Center this week as a wild card entry. While several Illini will compete, this ITA Indoor National Championship marks the end of the official fall season for Illinois.