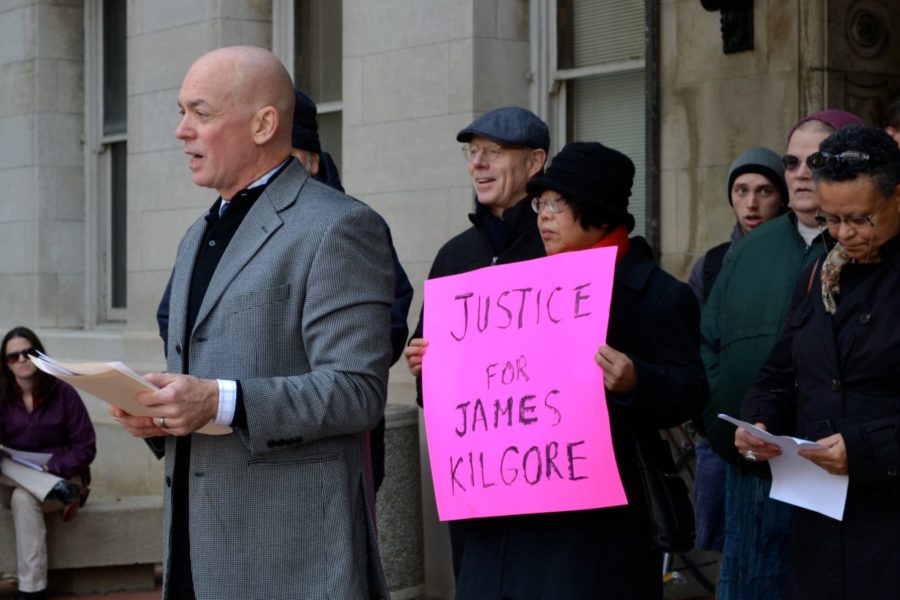 Dr. William Sullivan of the Department of Landscape Architecture gathers with fellow supporters of James Kilgore to speak with reporters outside the Henry Administration Building on Monday morning.

Supporters of James Kilgore rallied on Monday to urge the Board of Trustees to reconsider the former African Studies professor’s employment status at its upcoming meeting.

Although the Board of Trustees will meet in Chicago on Thursday, there is no item on the agenda pertaining to Kilgore’s employment.

William Sullivan, professor of architecture landscape and member of The Friends of Kilgore, addressed a small crowd outside the Henry Administration Building.

“This has been a long story, hasn’t it?” Sullivan asked. “Let me put this in plain English: the committee found that no errors were made, no corners were cut, no policies were violated in hiring Dr. Kilgore over these past four years.”

The Friends of James Kilgore was formed by tenured faculty members, following Kilgore’s unemployment, and advocates for his rehire. The group protests that the decision to reconsider his contract was made in response to political pressure and not based on his performance or academic contributions.

“We appreciate the many thousands of people, on our campus and beyond, who have signed petitions, written email messages to the Board of Trustees, taken action and seeked to reinstate James Kilgore to the University,” Sullivan said.

Kilgore, former non-tenured lecturer and African Studies researcher, was told in April by Provost Ilesanmi Adesida that he would be no longer be employed by the University after his contract expired on Aug. 15.  Though he was not given an explicit reason, this occurred after media attention was drawn to Kilgore’s past criminal record as a member of the radical Symbionese Liberation Army, known for the kidnapping of Hearst Media Company heiress Patty Hearst. He was involved in a 1975 bank robbery, in which one woman was killed, though he was not the gunman.

Kilgore went into hiding following these crimes, until he was caught in Cape Town in 2002 and served six years in prison in the United States.

Following the conclusion of his sentence, Kilgore joined his wife Teresa Barnes, teaching at the University until his dismissal inMay.

In response to strong backlash from students and faculty, Adesida appointed a committee on May 13, chaired by Professor Matthew Wheeler of the Department of Animal Sciences, to investigate the hiring processes used to hire Kilgore.

“The provost asked the committee to look closely at the policies for evaluating criminal background of future employment,” Sullivan said.

According to the committee’s recommendation released on Aug. 26, it did not support a permanent exclusion of employment for Kilgore.

“The committee submits that barring Mr. Kilgore from employment while those policies and procedures are created would single him out unfairly and unnecessarily, given his creditable employment record with the University,” the recommendation stated.

Sullivan read a brief selection from the committee’s report during the conference, which stated:

“Specifically, we would endorse the professional judgments of units wishing to hire Mr. Kilgore during the Fall 2014 semester pursuant to the hiring practices currently in place.”

Merle Bowen, director of the Center for African Studies, also voiced her support for Kilgore, stating that he is a tremendous asset to the University.

“At the Center for African Studies, he wrote numerous successful grant proposals and played a leading role in developing our U.S. Department of Education Title 6 application, that was funded in the amount of $2.2 million,” Bowen said. “In addition, he played a key role in conceptualizing and developing our outreach and educational programs.”

Dede Fairchild Ruggles, professor of landscape architecture, said the committee has also recommended that the University develop a criminal background check policy that requires all new hires to be subjected to a criminal history review — a recommendation she considers problematic.

“They are not a body of expertise in this issue … the implication is that virtually everybody with a criminal record poses a potential threat to the University,” Ruggles said. “I want to remind us that we are talking about people who have already been put through a process of law, been judged, served their time. Who are we (to) retry them?”

On behalf of The Friends of Kilgore, Sullivan called on the Board of Trustees to do four things: to follow the recommendations of the committee and reinstate Kilgore, to issue a public statement commending the committee for its review of the case, to refrain from further interference in the hiring decisions made by executive officers and to recognize the authority of campus administration to carry out their designated duties and responsibilities.

Barnes concluded the conference by thanking her husband’s supporters and everyone in attendance. She went on to say that academic freedom and transparency is necessary to maintaining academic institutions.

“We call on the Board of Trustees to absolve the matter of reinstating James Kilgore positively this week,” Barnes said.