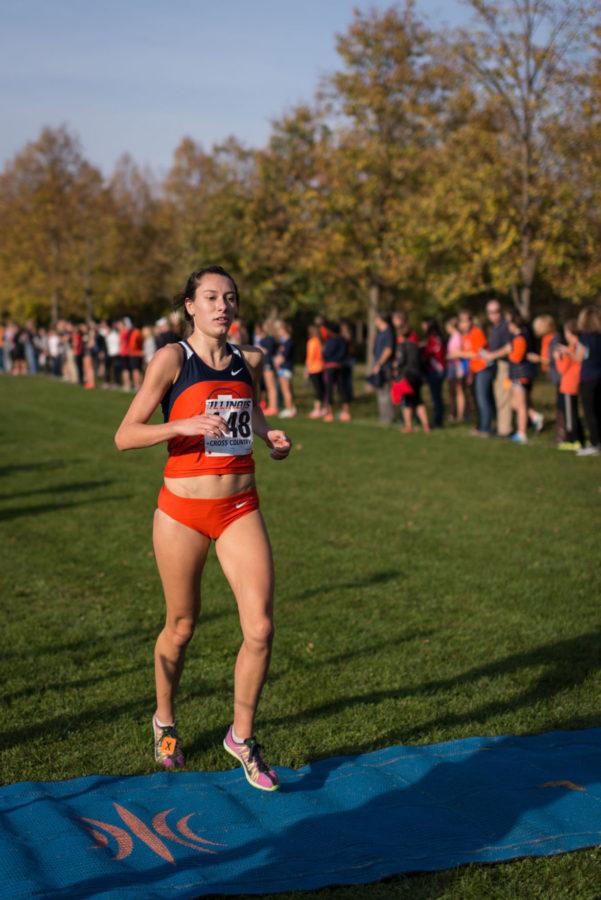 Growing up in Arlington Heights, Illinois, Hanna Winter was never much of a runner. She did other things.

One of those things was read, which she still does today.

“Reading helps me take my mind off things such as sports and school,” Winter said. “(It) provides me with a good balance.”

Winter was also an active swimmer and soccer player.

“She was always very active and a standout on her teams,” said Mark Winter, Hanna’s father. “We discovered her running talent in fifth grade when she ran for her small, Catholic elementary school and dominated the races.”

“Soccer and swimming were a good test of my endurance and I wanted to see how that would translate into running,” Hanna said.

According to Mark, Hanna was never all that interested in races, but realized she had a unique talent.

Her high school success led to a career with Illinois, where she found running a lot different, but rewarding in a new way.

“Running for the University of Illinois has given her a new outlook because she runs with so many talented girls and they’re all friends,” Mark said. “Her teammates are now her family.”

Hanna was also one of two freshmen on the team to compete at the NCAA Midwest Regional, finishing fourth for Illinois.

She also finished fourth for the team at the Big Ten championships and at the Pre-National Invitational, and finished fifth for the Illini at the Boilermaker Invitational.

After her decorated high school career, Hanna wasn’t used to finishing in the middle of the pack.

“At times, running for the small schools was challenging, because her talent surpassed many of the other athletes and the expectations of her success were high,” Mark said.

Pressure was also a difficulty for her in high school, according to her father.

In college, Hanna’s coach and teammates have helped her through pressure and she’s not intimidated by big races.

“She now looks forward to the challenge of a big race, and is proud to wear the orange and blue,” Mark said.

Hanna’s second big race of the season was one in which head coach Scott Jones said she surpassed all expectations.

“She has handled the responsibility of being an athlete the team can count on very well,” Jones said. “At the Big Ten meet, she beat some really good runners by performing at her best in a high-pressure environment.”

Hanna was the Illini’s top finisher at the Big Ten Championships. She came in 38th overall.

The Illini’s next competition is the NCAA Regional Championships on Friday in Peoria, Illinois, on a course the team has run and won on before. Hanna did not perform well in Peoria at the Bradley Invite in October, but Jones is confident Hanna will run well.

“Hanna’s race mirrored the team’s performance,” Jones said. “I expect Hanna to race better the second time on this course. There is more at stake, but I think she has the experience and composure to build on her Big Ten race.”

Alex can be reached at [email protected] and on Twitter @awallner93.